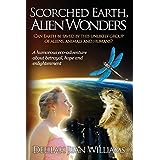 SUMMARY: Scorched Earth, Alien Wonders is a fun, futuristic, eco-adventure about an unlikely group of aliens, humans and other critters that join forces in a last-ditch effort to save environmentally ravaged Earth.

The story is told from a unique, non-human perspective in the narration of alien leader Captain Stanley Memphis, who heads a small, quirky group of aliens disguised as prairie dogs—the only remaining animals left on the dying planet after most of the human population has relocated to Mars.  Upon learning of plans by humans to move into the aliens’ quadrant of space, Memphis and his little team are sent to study how humans treat lower life forms and find out if they are savage bastards or a benevolent tribe. But the routine assignment soon turns into more than finding out what kind of creatures might be moving next door.

THE BACK STORY: My background is in environmental journalism and reporting on wildlife conservation.  Specifically, prairie dogs and that journey began in a pet store over 20 years ago.  They had baby PD’s in cages being sold as exotic pets.  I thought that didn’t seem right, so I called the local fish and wildlife services, and confirmed that, yes, indeed, prairie dogs were approved as pets in the state of Washington, along with most other states in the US. After all these years of advocating for PD protection, I was looking for a mechanism to educate the general population on the vital importance of this very misunderstood, keystone species, which has been decimated down to less than 2 percent of their original population.  My series of eBooks full of cute pictures, memes and scientific explanations didn’t accomplish the goal of reaching a broader audience. One day, I had an acquisitions editor say to me, “why don’t you just write a story?”

WHY WOULD SOMEONE WANT TO READ IT? Here’s one of my 5-star reviews on Amazon from Nancy Wagoner: “What a clever, fun and easy-to-read book this was! This eco-adventure held my attention right from the start and included plenty of plot twists and humor. Also has a load of pop culture references that made it even more fun when examined from the aliens’ point of view. I like that this wasn’t preachy, yet mentioned some true events that have taken place in prairie dog towns across the west. If you like wildlife, environmental issues and a futuristic viewpoint, this hits the spot!”

“What a fun read! All the way through I imagined Disney doing this as a movie. The characters were well-cut and clear, and the storyline moved at a fast clip with twists in the plot that made me want to keep reading. Plus, the scientific concepts were easy to understand. There are three worlds involved in this story, and each one played an important part. I welcome our new alien friends.”

“The story is charmingly told through the eyes of the aliens morphed into prairie dogs to interact with one of the last surviving PD colonies on Earth. The reader is treated to a well paced story line with a clever mix of intrigue, betrayal, corporate greed, humor and unique plot twists that both entertain and educate about the benefits of eco friendly human and animal coexistence and cooperation. The reader will also come away with an appreciation of wildlife exemplified by the prairie dog as a keystone species and why they are so important to thriving ecosystems. The reader will also likely identify with the carefully woven references to modern Hollywood entertainment TV series and movies. This book has it all!”

“What can I say but, ‘I want more!’ This delightful and amazingly original book not only made me smile, it touched my heart. If you love animals, intelligence, and justice all wrapped up in a single read, this is a must read. Kudos to you, Delilah Jean Williams. You tell a beautiful story.”

AUTHOR PROFILE: I’m an environmental journalist and political junkie and I live on a little, 2-acre piece of nature heaven in a remote area not too close to Seattle.  Writing is my passion.  Writing about nature and wildlife is my oxygen.

AUTHOR COMMENTS: The idea for this story, told from this approach, came to me after several trial and error plot lines, but when Scorched Earth, Alien Wonders began to take shape in my mind, I knew it was something unique and original. The entire process from book writing concept to published product was almost 2-years.

SAMPLE CHAPTER: Sample chapters can be read on my Amazon preview page.  The book is for mass audiences of all ages, but it was written specifically for the Young Adult Sci-Fi genre.  It is set in a vastly different future and includes a lot of deeper messages about hope, betrayal, love and enlightenment.  It asks the question, “Can any evolved, intelligent race ever claim to be free of greed, cruelty and corruption?” At its core, the book has a powerful message on environmental responsibility and wildlife stewardship. One of the main antagonists is the over-heated, unstable Earth itself.

WHERE ELSE TO BUY IT: Amazon