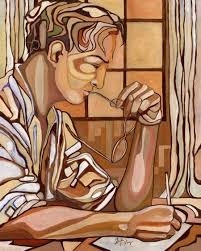 OUR CURRENTLY FEATURED BOOKS, “THIS ANGEL ON MY CHEST,” BY LESLIE PIETRZYK AND “MANIAC DRIFTER,” BY LAURA MARELLO, CAN BE FOUND BY SCROLLING DOWN BELOW THIS POST, ALONG WITH THE FIRST TUESDAY REPLAY.

To me, one of the most interesting features of our Snowflakes templates is the “Author Profile” section. On balance, they  tend to contradict the image of writers as solitary creatures holed up in a tiny room, fueled by coffee, accompanied only by the occasional cat, pecking their lives away on a computer keyboard.

Not that there is anything wrong with that, if you happen to fit that description. In truth, however, most of us who write for a living are more Ernest Hemingway than Emily Dickinson. In other words, we have outside lives.

And that’s good to know. You don’t need to sacrifice living in the real world to be an author, any more than you have to join a convent or a seminary to be religious. Indeed, it is the very nature of many authors’ “day jobs” that influence and inform their work.

Take, for example, Lenore Gay, whose novel “Shelter of Leaves” will be featured this week. The book tracks a young woman through the chaotic days following a major terrorist attack, and Lenore used her experience as a counselor to imagine how Sabine might find ways to cope.

She writes: “In my career as a therapist, I worked with people who had lived through various traumas and am familiar with the types of defenses people use to protect themselves. I created Sabine from experience with how people work to heal themselves. I put her in a chaotic situation and then created her inner and outer struggles as a way to discover how a previously traumatized person would respond to a crisis that would trigger more trauma. The book explores whether healing is possible and what it takes to heal and to survive.”

David Crouse (“The Man Back There”) is, like many of the writers featured in Snowflakes, a college professor. It is an ideal job for a writer —  interact with students for part of the year, spend summers working on personal projects. More importantly, teaching forces a writer to clarify his or her own ideas about the craft and find a way to communicate them clearly. Explaining what you’re doing usually helps you do it better.

Finally, there is poet Marilyn McCabe — creator of “Glass Factory” — who majored in anthropology with a minor in archaeology. Besides writing, she designs greeting cards and performs as a jazz singer. Some of her poems emerged from personal losses in her life.

In my humble opinion, the best writing comes when authors incorporate their uniqueness — the ideas, connections and experiences that are theirs alone — into their work. And it’s hard to accumulate these if you never leave that tiny room.

UPCOMING ON SNOWFLAKES IN A BLIZZARD, SEPT. 13-19.

“SHELTER OF LEAVES,” BY LENORE GAY

On Memorial Day, a series of bomb explosions shuts down major cities across the US. Her apartment in ruins, Sabine flees Washington DC and begins a grueling journey on foot that brings her to West Virginia, where she finds safety at an abandoned farmhouse with other refugees. For Sabine, family is a vague memory―she can’t even remember her last name. Without an identity, she hides, but later slowly begins to recall her past and wonders if her family is alive. Even in harrowing times, Sabine’s desires to belong and to be loved pull her away from shelter.

“THE MAN BACK THERE,” BY DAVID CROUSE

The Man Back There is about a certain kind of male psychology. Although on the surface the men in these stories might seem to be quite different—one is a farmer, another a divorced dog catcher, another a science fiction fanatic, another a United States senator—each of them suffers from an inability to confront his particular past. To look that past in the face would be admitting that the person who did those things, that person is me.  When I was writing these particular stories it struck me that there was something particularly male about that inability of these characters to do that. I’m not exactly sure what that is, but it might have to do with machismo and it might have to do with a kind of bruised male romanticism.

The poems explore loss and discovery, remembering and forgetting, and the accrual of identity through our experiences of the world.

Marilyn writes: “My poems are, by and large, accessible; that is, you don’t need to ponder over them searching for clues and connections, or trying to draw lines of logic among seemingly random sets of words. They may not all appeal to every reader, but everyone will find something of resonance in at least one of the poems.”