THE BOOK: “The Lies That Bind: Dark Horse Trilogy, Book 1”.

SUMMARY: In 1859, Durksen (Durk) Hurst, aka Dark Horse, a visionary charlatan on the run, encounters a dozen hungry slaves stranded in the Mississippi wilds, led by Big Josh. Two desperate people in need of one another, they agree to build an egalitarian plantation, with Hurst acting as figurehead “master” to deceive the town. Big Josh is the group’s natural leader, but Durk’s ambitious schemes imperil the tenuous brotherhood’s survival. 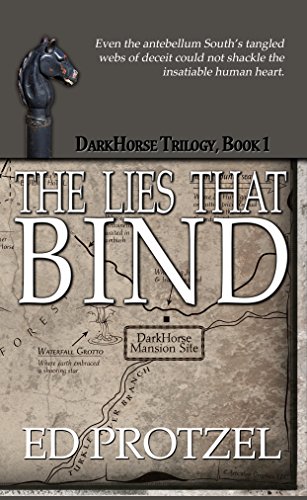 On the adjacent property live the Frenches: Missus Marie Brussard French, a controlling matriarch who manipulates the region’s bankers and cotton brokers, and her frail, rebellious heir-apparent, Devereau. They “legally” adopt a child from New Orleans to carry on their legacy, but the child dies mysteriously. Now Cassandra-like Antoinette, the mother, has come for her son and gets more than she expected.

Durk “wins” a large tract of land from a Chickasaw chief, the actual deed holder. Seeing Durk as a threat, Missus French orders Devereau to kill him. But Devereau, strangely ambivalent about Durk, refuses, and the conflict between the Frenches comes to a searing boil. Devereau uncovers family secrets, threatening to expose the French’s own vulnerable façade.

Durk’s diatribe against the war causes the town to brand him a traitor, a deadly offense. The war blows the cotton market asunder, convincing Durk and Devereau they’re each losing everything to the other. Devereau makes a fatal move, while Durk risks his life to free Antoinette. All the conflicts reach a climax, leaving both mansions ablaze—and everyone’s destiny determined.

THE BACK STORY: The Lies That Bind was originally written as a screenplay, which drew some praise and an offer to option it in Hollywood. I loved the concept, the characters, the drama, the humor, and the many plot twists, so I made the story into a full blown novel. I never regretted my choice.

WHY THIS TITLE: The Lies That Bind is a phrase that has multiple dimensions and layered meanings, telling deeper truths. It says that all people are bound by society’s lies, lies of law and tradition, with slavery the main falsehood dominating the antebellum South. My characters are also bound by lies they tell themselves. Psychologically, my main character, Durk Hurst, is obsessed with ambition—fulfilling a lie he has believed since childhood—and he lies to get his way. Indeed, all the characters in the novel constantly tell lies to achieve their ends or to merely survive. Even the wealthy, powerful French family in the novel are as chained by society’s lies as their own slaves. In fact, Devereau French is often jealous of his own slaves. Even the minor characters and the town itself have dedicated their lives to lies.

WHY SOMEONE WOULD WANT TO READ IT: The novel has many layers, with many deeper meanings that are relevant to today. Moreover, the book is an exciting read, beginning to end, with mysteries and dramas, schemes and dangers, revelations and humor. Readers of historical fiction, Southern and African-American literature, family sagas, and those who simply enjoy a good mystery will enjoy this fast-paced and emotionally satisfying story. The book is also instructive in terms of social justice and serves as a good learning tool for students, in that none of the characters (all of whom are deeply flawed) are depicted as villains or heroes. Rather, the book speaks to our common humanity, our need for freedom, and our aspirations as individuals, to find meaning in life and each other.

“The action and drama are compelling from the first page to the exciting conclusion. The animosity between the French plantation and Hurst builds to an exciting and surprising climax. Antoinette is so mysterious, one doesn’t know of her mission until the end. Highly recommended, and I am anxious to read the next installment.” – Historical Novel Society.

“The debut novel of author Ed Protzel’s ‘Dark Horse Trilogy’ series, “The Lies That Bind” is a deftly crafted and consistently compelling read from beginning to end. While strongly recommended for community library Historical Fiction collections, it should be noted for personal reading lists that “The Lies That Bind” is also available in a Kindle edition ($4.99).” – Small Press Bookwatch, Midwest Book Review.

“The Lies that Bind, by Ed Protzel is set in a small back-country town called Turkel, Mississippi. It’s an entertaining and complexly plotted pre-Civil War novel about fairness and decency versus slavery and greed. Cotton, the South’s money crop, also plays a large role in the story. There is an illuminating scene in a cotton broker’s office that’s reminiscent of how big business, especially hedge fund bankers, work today. Protagonist, Dursken Hurst, a drifter and idealist who wants to end slavery, is pitted against Marie Brussard French, Turkel’s aging and reclusive doyenne, who lives on her large plantation. Like the chess pieces Mrs. French manipulates in the her sitting room, she also controls all aspects of life in Turkel, including those of her son, Devereau. These main characters are supported by a cross-section of humanity, from local Indians; slaves; assorted riffraff; and a beautiful woman on the run. The book is aptly named, because much in this novel is not what it appears to be. One of the strengths of the book is in its vivid characterizations and the author’s depictions of the natural world, such as these descriptions of Devereau and of the setting sun:

“Devereau was thirty-one, the rosy softness of his naked cheeks and his slight stature gave one the sense of an adolescent boy.… Lightly freckled and frail, with cropped auburn hair, this morning he appeared a trembling, emaciated stick figure, with eyes bloodshot and swollen.”

“Dark rapidly closed in, the sun’s retracting tendrils leaving bloody claw marks upon the clouded sky. The final residue of daylight trained quickly behind the western hills, drawing with it what little warmth remained of the day.” — Terry Baker Mulligan (author of Afterlife in Harlem)

“What a first novel! It seems that for the past few years, well-written novels fall into one of two categories: Either they provide a stroll through a pleasant path, a comforting respite from the madness of the human situation, or they leave me brow furrowed, exhausted from the effort of concentrating on those same problems. Here’s a novel that entertains with its gamesmanship: The central conceit of playing chess requires careful attention, but attention that doesn’t require the reader to burn brain cells. Main characters play consequential games of chess, but more exhilarating is the game between the story (the author) and the reader. The former leads the reader along an easy route, only to discover that it has suddenly turned a right angle. While the reader believes only a pawn appears vulnerable, suddenly the board spins and the reader has at least to chuckle. (This reader broke into a giggle when he saw the sudden new direction.)

“The book takes the conventions of black and white in chess and turns them on their heads. A bishop flips to become a queen; pawns become knights. And once the game ends (sort of: This novel marks the start with two more promised to fill out a trilogy), the reader realizes there’s a deeper, more significant set of themes to consider. Having slid easily along, enjoyed some hilarious twists, delightful direction changes, startling shifts, the reader realizes there is more here than a game. The story has dipped deeply into the inherent conflicts of the living out of The American Dream.” — Richard Friedrich, author, Amazon reviewer.

AUTHOR PROFILE: The unique perspective of a mixed-heritage Jew-Cherokee, who lived for a time in an orphanage and later as a teen runaway, gives Ed Protzel special insights into characters that are outsiders, men and women on lonely quests seeking justice, love, and fulfillment against society’s blindness. The Lies That Bind, a darkly ironic antebellum South multiple-mystery/drama, is the first book in Ed’s DarkHorse Trilogy. Ed has written five original screenplays for feature film and developed scripts/projects for 20th Century Fox. Ed earned his master’s degrees in English literature/creative writing from the University of Missouri-St. Louis and his bachelor’s in English at the University of Hawaii-West Oahu.

Ed’s expertise as a novelist and screenwriter is in the American tragicomedy movement (Faulkner, Twain, Tennessee Williams, Flannery O’Connor), science fiction, Shakespeare, and a variety of historical periods, including World War II, the American Civil War, and Fourteenth Century Europe. The final two books in the DarkHorse Trilogy include the same major characters as the original: Honor Among Outcasts, set in Missouri during the Civil War (to be published in 2017), and Something in Madness (2018), set in California as Durksen and Antoinette become the tumultuous state’s embattled first couple. Ed lives in St. Louis, where he writes full time and teaches college English.

AUTHOR COMMENTS: William Faulkner’s Absalom, Absalom! was a major inspiration for The Lies That Bind — but sometimes I reversed his concepts. As far as language goes, no one can duplicate Faulkner, and shouldn’t even try. Rather, operating on my own literary theories and style, I try to be as economical as possible, using impressionistic descriptions to set the scene and the mood. Like Faulkner’s tale, in The Lies That Bind, as the plot moves forward chronologically, revelations about the characters’ pasts move back in time, revealing the novel’s themes. But there is one major difference at the heart of my novel that is entirely contrary to Faulkner’s tale: I give credit and identity to the slaves. He did not.

That always troubled me about Faulkner’s great work. The central character in Faulkner’s novel is Thomas Sutpen, who built a great plantation out of a swamp, called Sutpen’s Hundred, a man who is emblematic of the antebellum South and its slave society, its rise to power, and its fall. While the narrators boast of Sutpen’s success, they barely mention his slaves. Had they nothing to do with the creation of Sutpen’s Hundred?

Thus, one of my motivations for writing The Lies That Bind, my whole concept for the novel, was to correct that racial omission. In fact, in The Lies That Bind, the townsfolk (in antebellum Mississippi) give the protagonist, Durksen Hurst (a free, mixed-blood white-Seminole charlatan), credit for the success of his DarkHorse plantation. But the reader knows the truth: that it’s Durk’s secret partners, former slaves, who contribute the agricultural expertise to their mutually owned plantation. In fact, one of the slaves, Big Josh, who had once run the plantation for his former dissolute master, was the real brains of the operation, something that actually happened historically.

No, no writer can match William Faulkner or compare his writing to the great man. The Lies That Bind is a much faster, easier read than Absalom, Absalom!, and I use very different techniques to tell a very different story, with more modern themes. But seeing how I play off Faulkner’s novel is a lot of fun—and, I hope, enlightening, as well.