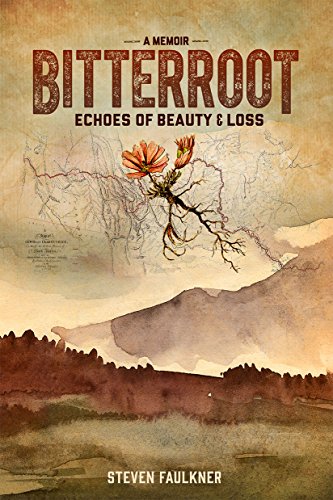 THE BOOK: Bitterroot: Echoes of Beauty and Loss

SUMMARY: A modern father and son travel the Oregon Trail with that remarkable 19th-century traveler Pierre Jean De Smet who leads them to the Rocky Mountains where they join Lewis and Clark during their difficult crossing of the continental divide—several weeks that almost killed them. Along that trail they meet the Nez Perce tribe who helped save the lives of Lewis and Clark and their “corps of discovery”. On the return trip, father and son join the Nez Perce in their long flight from General O. O. Howard and the U. S. army.

This is a travel book like Blue Highways or John Graves’ Goodbye to a River, with vivid accounts of historical events along the way: the Chinese Massacre in Rock Springs, Lewis and Clark’s miserable climb through the Bitterroots, the Nez Perce battle at Big Hole, the Battle of the Little Bighorn from the perspective of a Sioux boy who lived through it.

THE BACK STORY: True Story: father and son take to the road, the trail, the river to experience the old West.

WHY THIS TITLE: The story centers on the Bitterroot Valley and the Bitterroot Mountains of Montana and Idaho, but it also picks up the beauty and bitterness of life in the old West.

WHY SOMEONE WOULD WANT TO READ IT:  If you like travel books that reveal history, a father-son story that opens a relationship, and encounters with strangers that open up side canyons in the landscape, this is the book.

“A well-recounted father-and-son journey in the Missouri River country . . . A fine travelogue worthy of shelving next to Jonathan Raban and William Least Heat-Moon.”

“Faulkner juxtaposes the past with the present. . . . The teams past and present share demanding land, threatening weather, and colorful interactions with people along their trail. . . . Faulkner’s verbs vivify, his quotes enlarge his experience, and his poetic descriptions exploit all five senses.”

AUTHOR PROFILE: Steven Faulkner grew up in the Sudan and Ethiopia in Africa, and later in Arkansas and Kansas. After dropping out of college, he married, had children, and worked a variety of jobs: driving dump trucks and concrete mixers, carpet cleaning, roofing, newspaper and doughnut delivery, and spent fourteen years as a carpenter.

He returned to school and acquired the necessary degrees from the University of Kansas and now teaches Creative Writing and American Literature at Longwood University in southern Virginia.

His previous book Waterwalk: A Passage of Ghosts has been made into a movie starring Hollywood actors Robert Cicchini and Chase Maser and has been released across the United States and Canada. It is now available on DVD. Faulkner has published essays in many literary journals and magazines including: North American Review, Fourth Genre, Southwest Review, Shenandoah Review, DoubleTake, and Wisconsin Trails Magazine. His work has been noted in Best American Essays and anthologized in Beacon’s Best.

AUTHOR COMMENTS: I’ve always loved travel writing that deepens my understanding of landscape by taking me into the history of a region. I want to see a place with eyes old and new. We enter the past and experience it more fully if we take with us the words of those who lived it. When we attend to words, they attend us, and we find ourselves within the story and the story rewriting our lives.