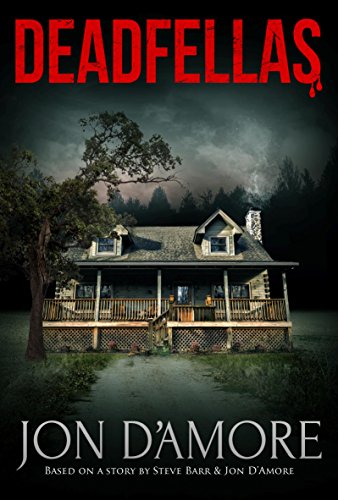 THE EDITOR: If I told you, I’d have to kill you and everyone who read this, or those you’re asking about.

THE PUBLISHER: DEADFELLAS is the second book I’ve self-published under the banner of JMD. The first (THE BOSS ALWAYS SITS IN THE BACK – A Memoir) was 5+ years ago, which sold consistently for 4 years, plus was responsible for allowing me to be the subject of over 200 readings, radio & TV appearances and interviews. The second book is selling at the same pace, and with Halloween upon us, sales are expected to climb. I must be doing something right.

SUMMARY: “New Jersey mob boss, Giuseppe ‘Joey’ Ponti, assigns his trusted lieutenant, Carmine ‘Chickie’ Santorella, to find out why the family’s casino is losing money. Chickie and three mob soldiers, Bobby Battaglino, Richie Paldino and Sammy Trombino, travel to a small Nevada town, kidnap the casino manager and take him to a secluded cabin that has been used for mob executions for decades.

Unfortunately for them, by torturing the half-Indian/half-Italian manager, they invoke an ancient Shoshone curse which awakens the buried dead to hunt them down. Whacked gangsters, stoolies, lawyers and hookers crawl out of their graves with only one thing on their decomposing minds…kill the four mobsters.

It’s mobsters versus monsters when Chickie and his crew, along with Dallas, China and Jenny (three hookers who wind up in the wrong place at the wrong time), fight for their lives against scores of reanimated Mafioso.”

THE BACK STORY: The book DEADFELLAS started out as a 90-page screenplay by me and Steve Barr while I was living in Los Angeles. We came up with it as a joke between the two of us…until we realized we were onto something. But for best explanation of what happened, Steve wrote the book’s Foreword. Here are some excerpts from it:

And so we came up with a Mob/Zombie story, a morality tale of connected men forced to fight monsters outside the house…while being betrayed by mobsters inside the house. It let us play with the tropes of both genres in a fun way, and we got to resurrect some of our favorite whacked characters from the Mob movies of the last 50 years.

The zombie genre, we were told, is dead. The genre’s DVD bonanza of the 90s is over. There hasn’t been a successful zombie project in decades…as long as you don’t count the Dawn of the Dead remake, and Zombieland, and World War Z, and the Resident Evil franchise, and Warm Bodies, and Pride And Prejudice And Zombies, and Ash Vs Evil Dead, and iZombie, and the Santa Clarita Diet.

Hollywood is known for a lot of things, but internal consistency isn’t one of them, especially since this apparently-dead genre just keeps getting up and walking around.

We really like DEADFELLAS, so Jon decided he’d stop waiting for a movie to happen, and instead he’d tell this tale in a different fashion.”

I think that should give you a decent overview of why I took a 90 page screenplay and turned it into a story that covers two generations, with the love, honor and hatred among these Men of Respect … leading up to one horrible night and day in 1999.

WHY THIS TITLE?: It’s about the Mafia and the reanimated corpses of those they killed over decades. What else can you call a book like that other than DEADFELLAS?

WHY WOULD SOMEONE WANT TO READ IT?: Because of my last book, which was a memoir of my life growing up in a Mafia-connected family, and something we did during the mid-1970s that changed laws in America, people wondered what I could top that story with. When I told them it was a still a mob story, but there was a bizarre twist at the end of the story. No one was sure how those of an “older demographic” would take to mob-zombies.

When the results came in, everyone was so wrapped up in “the story,” they felt the zombies showing up was the only logical thing to have happen…and it’s becomes so humorous that people of every demographic has been enjoying the mixture of rela-life mob stories with the unique twist and introduction of a genre never combined before.

“Jon D’Amore’s family was “connected.” Jon drew on those memories and some amazing true-life adventures in his first novel, THE BOSS ALWAYS SITS IN THE BACK. His second book, DEADFELLAS, actually started as a screenplay, for what seems like a no-brainer to me: A mash-up of two incredibly popular genres, the classic mobster movie and zombies. You see it all coming, but nonetheless D’Amore’s account of spiffily overdressed Mafioso clawing their way out of their secret graves to wreak vengeance reads like prime Stephen King (by way of Mario Puzo), Goodfellas meets Night Of The Living Dead, Tony Soprano goes to the Pet Semetary, The Godfather vs The Walking Dead. If you love mob stories, the details in the first half of the book will engross you, and if you’re into horror, the finale will scare the shit out of you. Win/win. And man, I really hope somebody eventually makes the movie.” — Lisa Tracy – Author of Objects of Our Affection and Muddy Waters: The Legacy of Katrina and Rita. Former journalist and editor for The Philadelphia Enquirer, The Record of Hackensack, and The Passaic Herald News

“So you wondered where all of those dead mobsters were hanging out? Forget the Corleone family and their lakeside cottage. Skip New Jersey’s meadowlands and head for Nevada. In his ingenious new book DEADFELLAS, Jon D’Amore mingles mob lore with a wacky zombie jamboree to come up with the best read since THE BOSS ALWAYS SITS IN THE BACK. And speaking of the boss, you may find him out there too – along with damsels in distress, one genuine hero – and a denouement that will leave you laughing and shaking your head as D’Amore’s sly humor and his firsthand knowledge of “the family” provides the perfect – shall we say – payoff. Get an extra copy. You’re going to want to share this one.” == Steven W. Booth – Co-author of The Hungry ombie series

“If Mafia fiction is like an Italian meal, then Jon D’Amore is a master chef serving up a banquet of wise guys, mob bosses, hit men and casino scams. But this isn’t your grandmother’s spaghetti. D’Amore has seasoned the sauce with ancient Indian curses and a liberal helping of the undead. Every mouthful of this delicious mob/zombie fusion will satisfy your craving for extra helpings. — Robert Rhine – Deaditor-In-Chief of Girls and Corpses Magazine

“Besides Jon D’Amore being a stand-up guy, a goombah you can respect, from page one of Deadfellas you know he’s creating from his life’s experiences. I always knew he was a great writer, but this is a real piece of work. I suggest buying a copy, or you’ll be getting the ‘Moe Green special.’ And don’t forget to take the cannoli.”

AUTHOR PROFILE: Born and raised in Hudson Country, New Jersey during the historic eras of the 1950s, 60s & 70s, and only a few miles from midtown Manhattan, Jon D’Amore was consumed by entertainment, education, and a culture few will ever again experience.

Starting guitar lessons at an early age, Jon went on to perform on the road and as a studio musician. During that time, he wrote a music column for a northern Jersey newspaper, dabbled in songwriting and as a novelist.

By the mid-1980s, he stepped into the corporate world using the skills of a stage performer and writer to achieve levels his superiors said he could never reach…but did. Thirteen years later, Jon realized he didn’t want to grow up to be like the people he was working for…so after telling the Senior Vice President exactly where to put the company-owned laptop and expense account, Jon went to Los Angeles to spend 18 months writing his memoir, THE BOSS ALWAYS SITS IN THE BACK.

It didn’t take long before he learned, ‘L.A. is to screenplays as Manhattan is to book publishing.. So instead of returning to the east coast with hopes of getting his book published, Jon learned to write and edit screenplays, and stayed in the land of sun, surf and high gas prices… though always hoping to someday see THE BOSS published.

That day came in May, 2012, followed by a run of good fortune that lasted more than four years with coast-to-coast book readings and signings, print and radio interviews, and TV appearances.

Wanting to give THE BOSS fans a follow-up of the same genre, Jon felt DEADFELLAS, a screenplay he co-wrote with Steve Barr, would make an entertaining book with a satirical turn to THE BOSS by bringing together everyone’s fascination with the Mafia…and the popular world of zombies.

When asked why he chose his next book to be DEADFELLAS, Jon responded, “I’ve never been happy living in the box others deemed to be the norm. So why would I start now?”

WHERE ELSE TO BUY IT: Amazon, Barnes & Noble, iTunes and Kobo. Signed copies are available at http://www.DEADFELLAS.com.

CONTACT THE AUTHOR: Jon@DEADFELLAS.com. Facebook pages are under: Jon D’Amore, DEADFELLAS, and THE BOSS ALWAYS SITS IN THE BACK. Websites for the books are http://www.THEBOSSALWAYSSITSINTHEBACK.com and http://www.DEADFELLAS.com