THE PUBLISHER: Etruscan Press: a non-profit literary press working to produce and promote books that nurture the dialogue among genres, cultures, and voices.

SUMMARY: By way of summary, here is an excerpt from a review in Rain Taxi by Daniela Gioseffi: “American Amnesiac is Diane Raptosh’s fourth book of poetry, and very possibly her best. She attempts something quite unusual with this magnum opus—one long poem spoken in the persona of an older [white] man suffering from amnesia. The book constitutes his stream of consciousness as he attempts to piece together who he is and what he’s experienced in his American life. His situation is laid bare on the first page of the book: “I . . . / woke in Civic Center Park three states away, four hundred bucks / stuffed in my right sleeve. My life has always been a flock of mishaps // waiting to take flight.” 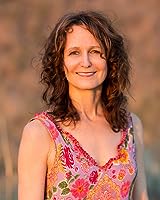 “A poignant and interesting saga follows, page after page, as the amnesiac travels through America in and out of his mind, commenting on the meaninglessness of his journey and the story of his life that only comes to him in bits and snatches of memory. It is a skillfully written journey through the American cultural landscape, as our “John Doe” becomes “a man missing a nation and a wife, strung up between a past / I may not want and a present in which I cannot make myself at ease.”

“‘John Doe,’ as he prefers to call himself, thinks he may be anyone from a ‘Calvin J. Ex sous chef . . . to a ‘Think-tanker in Singapore. Financial Consultant. Art historian. / Husband. Apprentice in P.R. NGO pundit.’ His rambling thoughts carry us through seventy-two pages of his memories, snatches of speculations and ironic pronouncements that constitute a meandering critique of American culture.”

THE BACK STORY: I wrote the book after a number of decades of studying America. I started seeing so many disturbing patterns, having to do with growing income inequality, diminishing options for developing selfhood, environmental degradation, and white fear (One key line in the work is “Pale males will not have been the wronged minority / despite what they will no doubt come to say.” And here we are in 2017: the era of white nationalism. The book took about three years to write, but I had been researching the themes–studying how power works in the U.S.–for basically my whole life.

WHY THIS TITLE?: It’s basically self evident: a book-length dramatic monologue spoken by an amnesiac in the U.S.

WHY WOULD SOMEONE WANT TO READ IT? Anyone who wants to understand how America works–what its real priorities are–and anyone who enjoys humor and language play, cultural analysis and crossword puzzles, poetry and philosophy, music and art, food and the news, should read it. It came out in 2013 but was quite prescient in terms of its pointing the way to the present political moment.

“Neither do we [readers] recognize this world in which we are caught in our own delusions and jumbled recollections that boggle the brain into a uniquely American amnesia. Ultimately, that is the point of this stirring saga.”– Daniela Gioseffi, Rain Taxi

“American Amnesiac is an epic poem of sorts – to the extent that our age allows the possibility of an extended and culturally unifying narrative – and it asks us to consider notions of greatness that run counter to our usual veneration of the individual. Cal’s loss of identity is an unsettling, ominous, and particularly American condition, but, in Raptosh’s hands, it also opens up the possibility of a positive transformation.” — Hartskill Review

“When Adrienne Rich won the Yale Younger Poets Award in 1951, few people felt the United States was on the path of becoming a country that would embrace marriage equality and an African American president. What these poems do best is to synthesize our experience—both intellectually and emotionally—and try to make sense out of the cacophony. Like Rich, Raptosh sees a changed world, and the poems in American Amnesiac point with a “spine of possible decency” toward it.” –Marc Sheehan, Weave Magazine

“The character’s pretended amnesia is infecting in the sense that the poems manage to distract us by their continuously funny and captivating surprises, thus swiftly transforming us from bewildered witnesses into pervert accomplices to this psychological suicidal (as we enjoy the riddles and pretend to forget they are actually about us too).  Therefore, Raptosh’s ingenious scenarios speak not only about contemporary human condition, but also about the cultural and linguistic conditions of engaging with that condition.” — Margento, A U-Ottowa Arts Website

AUTHOR PROFILE: Diane Raptosh’s fourth book of poetry, American Amnesiac (Etruscan Press) was longlisted for the 2013 National Book Award as well as a finalist for the Housatonic Book Award in poetry. The recipient of three fellowships in literature from the Idaho Commission on the Arts as well as a grant from the Alexa Rose Foundation, she served as Boise Poet Laureate (2013) as well as the Idaho Writer-in-Residence (2013-2016), the highest literary honor in the state. An active poetry ambassador, she has published widely in peer-reviewed journals and anthologies and has given poetry workshops everywhere from riverbanks to maximum-security prisons. She teaches creative writing and runs the program in Criminal Justice/Prison Studies at The College of Idaho, where she holds the Eyck Berringer Endowed Chair in Literature. Her fifth book of poems, Human Directional, was published by Etruscan Press in Fall 2016. She lives in Boise, Idaho with her family. Find her website here:
http://www.dianeraptosh.com

AUTHOR COMMENTS: “In the tradition of 19th-century figures like Emily Dickinson and Walt Whitman, I feel I am very much a poet of America. I had for a long time wanted to write a great big American poem, following the tradition(s) of some of the nation’s best writers, not all of them poets: Adrienne Rich and James Baldwin are two of my all time writing heroes. But I knew I needed to put my own signature on such a work. Hence, in ​American Amnesiac:  the humor, the crazy word-play, the dissociative elements of the book that befit an amnesiac as well as speak from the fractured contemporary American psyche we all share.”

armies, farms, small and large pieces of parchment. I stand by
all the territories I have ever been, even as I can’t

remember them. I am a locum—ear to the emperor penguin, a banner ad
blinking to the hoi polloi. Since I’ve become John Doe, I swear

I can feel most objects with sixty digits
instead of five. This makes me think

of Lisette. Makes me miss her left collar bone. Her hips’ wingtips.
A train moans from a far hummock.

Which reminds me that everyone I’ll have to live without
I must help to find a place within. Which is an act

of granite will. A strain. A ditty.
An exercise in utmost beautility.

WHERE ELSE TO BUY IT: Amazon, Barnes & Noble, Etruscan Press http://etruscanpress.org/​

One thought on “American Amnesiac”