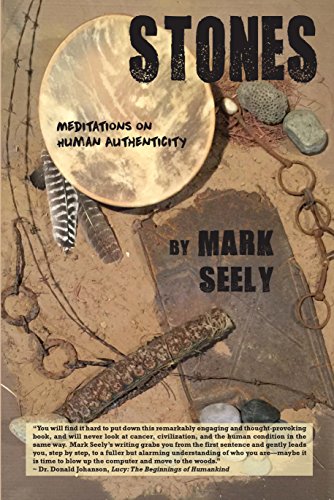 SUMMARY: Set against the backdrop of an aging psychology professor’s struggle with testicular cancer, Stones is a lyrical and intellectually muscular exploration of the violent disconnect between our evolved human nature and our civilized reality. The underlying theme is that the really big problems we face—everything from diabetes to climate change—can be traced, ultimately, to a fundamental mismatch between our civilized lifestyles and our physical, psychological, and social expectations for a very different kind of life. Within each of us lurks a marvelously complex and powerful being, but much of who we are has been stunted and redirected in ways that are neither healthy nor, ultimately, human.

THE BACK STORY: I have a background in evolutionary psychology, and I am extremely interested in the mismatch between modern civilization and our evolutionary expectations for a hunting-gathering lifestyle. I incorporate this “mismatch” theme in many of the college courses that I teach. The moment I was diagnosed with cancer, I began to jot down my reflections and observations in a journal so that I could have a personal record of my physical and emotional state—the psychologist in me just couldn’t let the opportunity to collect data slip by. In the meantime, I had a loose collection of short essays and aphorisms that I had been compiling for two or three years.

One evening, a couple of days after a clean CT scan, I came home from a work-place gathering where I drank way too much wine, and I was feeling frustrated about the inane conversations I had been drawn into with some of my colleagues. For whatever reason, I sat down and typed what became the opening paragraph of the book. Stones came from the merging of my cancer journal entries, the collection of essays and aphorisms I had on the back burner, and some of my favorite evolution-themed psychology lectures.

WHY THIS TITLE?: The title, Stones, is both metaphor and pun. Metaphorically, it evokes strength, toughness, and durability. It also calls to mind the primitive and the foundational. There is an ancient, rock-solid core to our human nature that is still present and persistent, biding its time, lying in wait just beneath the thin and brittle layers of strata deposited by a few hundred generations of civilized life. As a pun, well, Stones is, in part, a chronicle of my struggles with testicular cancer.

WHY WOULD SOMEONE WANT TO READ IT? Stones is unique in that it provides a rarely voiced  male perspective on cancer. The vast majority of books about cancer are written for women or from a female perspective. But Stones is not solely a cancer memoir. It is an exploration of much more universally applicable—and deeply personal—issues concerning the physical, psychological, and social effects of living with modern global civilization. Modern society is a serious problem for us in many ways, and there is no way of dancing around that fact. But the ultimate message of Stones is one of empowerment through knowledge, specifically through self-understanding.

“You will find it hard to put down this remarkably engaging and thought-provoking book, and will never look at cancer, civilization, and the human condition in the same way. Mark Seely’s writing grabs you from the first sentence and gently leads you, step by step, to a fuller but alarming understanding of who you are—maybe it is time to blow up the computer and move to the woods.” — Dr. Donald Johanson, Lucy: The Beginnings of Humankind

“What do an ailing human body and our planet have in common? Plenty. Mark Seely deftly explores the connections in Stones, combining a psychologist’s insight into human behavior, a teacher’s skill for making complex information understandable, and a poet’s gift for beautiful syntax. Equal parts memoir, history, and cultural philosophy, Stones examines what it means to be human in today’s world, from planetary crisis to personal mortality. You may not agree with all of his conclusions, but Seely will definitely make you think.” — John Sheirer, author of Make Common Sense Common Again and Loop Year: 365 Days on the Trail

“With Stones, Mark Seely invites us to take a journey around the world, back through history and into his own body. The very real problem of civilization, as an opiate for the masses, far greater than anything mere television could conjure up, is writ large in this fascinating tale of survival, whatever the challenges.” — Keith Farnish, author of Time’s Up! An Uncivilized Solution to a Global Crisis and Underminers: A Practical Guide for Radical Change

AUTHOR PROFILE: Mark Seely is a writer, social critic, professional educator, and cognitive psychologist with a PhD from the University of California, Davis. His essays have appeared in Fifth Estate Magazine, Free Inquiry, and Snowy Egret. He was formerly employed as Associate Professor and Chair of Psychology at Saint Joseph’s College in Northwest Indiana, where for twenty years he taught statistics, a wide variety of psychology courses, and an interdisciplinary course on human biological and cultural evolution. Originally from Spokane, he acquired an abiding curiosity and reverence for the natural world as a young child while fishing with his father and grandfather in the lakes and rivers of the Pacific Northwest. His hobbies include hiking, tending a four-season organic garden, drinking copious quantities of homemade mead, and playing the mandolin—from Bach to bluegrass. He now resides in Lynnwood, Washington, and teaches in the psychology department at Edmonds Community College.

AUTHOR COMMENTS: I know there are a good number of folks who are as disgusted as I am about the horrendous impact our culture is having on the natural world. And I think we all recognize that how we are living our lives these days doesn’t quite feel right. But I’m not sure that very many people would say that civilization is the problem—not just the specific way that we do civilization, but civilization itself, as a template for our social interactions, and as a way of structuring our lives. And I’m not sure that very many people share my belief that the solution—if there can be one—involves embracing our evolved predilections for much more “primitive” (read: authentically human) physical and social circumstances. But I could be wrong about this. The feedback I have been getting from people who have read the book suggests that these notions might be a lot more prevalent than I think they are.

LOCAL OUTLETS: WHERE ELSE TO BUY IT: Amazon, or get a signed copy from me by visiting markseelybooks.com PRICE: $16:00 CONTACT THE AUTHOR: If you would like to talk in person, I am easy to find and would welcome the human contact. Otherwise you can email me at mail@markseelybooks.com or find me on Facebook.