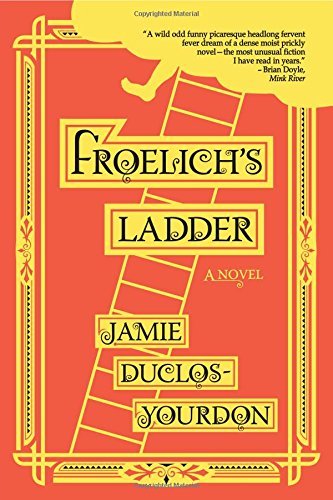 THIS WEEK’S OTHER FEATURED BOOKS, “LUCKY SOUTHERN WOMEN,” BY SUSANNAH EANES AND “JESSIE,” BY PATRICIA DEAN ROBERTSON, CAN BE FOUND BY SCROLLING DOWN BELOW THIS POST, OR BY CLICKING THE AUTHOR’S NAME ON OUR AUTHORS PAGE.

THE PUBLISHER: Forest Avenue Press (“Literary fiction on a joyride”).

SUMMARY: Froelich nurses a decades-old family grudge from his permanent perch atop a giant ladder in this nineteenth century madcap adventure novel. When he disappears suddenly, his nephew embarks on a rain-soaked adventure across the Pacific Northwest landscape to find him, accompanied by an ornery girl with a most unfortunate name. In their encounters with Confederate assassins, European expatriates, and a general store magnate, this fairytale twist on the American dream explores the conflicts between loyalty and ambition and our need for human connection, even at the highest rungs.

THE BACK STORY: Although it’s my debut novel, Froelich’s Ladder was the eighth book I’d written in 12 years. At the time, my wife and I were pregnant with out first child (more so my wife than me) and I was petrified by the notion of becoming a father. I hoped to envision a world where, despite grim circumstances and the occasional unsavory character, people generally take the time to help each other; that was the kind of world I wanted for my son.

WHY WOULD SOMEONE WANT TO READ IT? Froelich’s Ladder is a work of fabulist fiction—after all, the titular character has lived on top of a ladder for the past twenty years. Readers who enjoy fantasy and whimsy, grounded in a historical context, will have fun with this “nineteenth century madcap adventure novel.”

“From the first page to the last, Froelich’s Ladder brims with color, intrigue, and verve. At once a fantastical, madcap adventure and a poignant meditation on independence and solitude, it’s the kind of book that captivates you quickly and whisks you high into the atmosphere. I was in thrall to the surreal Oregon landscape, populated by tycoons and grifters, cross-dressers and hungry clouds. This debut is clever, irreverent, and ultimately unforgettable.” – Leslie Parry, author of Church of Marvels

AUTHOR PROFILE: Jamie Duclos-Yourdon, a freelance editor and technical expert, received his MFA in Creative Writing from the University of Arizona. His short fiction has appeared in the Alaska Quarterly Review, Underneath the Juniper Tree, and Chicago Literati, and he has contributed essays and interviews to Booktrib. He lives in Portland, Oregon. Froelich’s Ladder (Forest Avenue, 2016) is his debut novel. SAMPLE CHAPTER: https://www.amazon.com/Froelichs-Ladder-Jamie-Duclos-Yourdon/dp/194243619X/ref=sr_1_1?ie=UTF8&qid=1514243184&sr=8-1&keywords=froelich%27s+ladder

WHERE ELSE TO BUY IT: Amazon, Barnes & Noble, and anywhere books are sold.