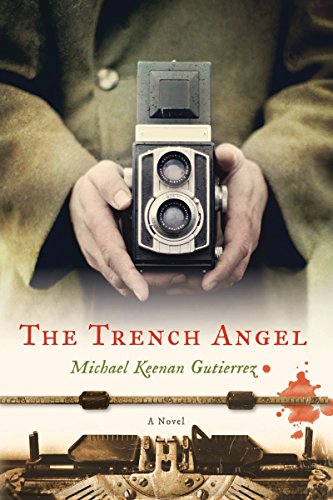 THIS WEEK’S OTHER FEATURED BOOKS, “EMPIRE OF GLASS,” BY KAITLIN SOLIMINE AND “AFTERSHOCK,” BY TOM BENTLEY, CAN BE FOUND BY SCROLLING DOWN BELOW THIS POST. OR, CLICK THE AUTHOR’S NAME ON OUR AUTHORS PAGE.

THE BOOK: The Trench Angel.

SUMMARY: The Trench Angel is set 1919 in Colorado and follows Neal Stephens, a newspaper photographer just back from the War. We follow Neal through a week of coal strikes, a murder, and memories of his long lost wife who was presumed dead during the war. He also has to deal with the re-emergence of his father, an anarchist, who abandoned Neal as a boy. The book is part mystery, part political novel, part dark comedy. It touches on issues of class, race, and how communities shape who we become for good and ill.

THE BACK STORY: The initial spark came from a professor in my grad program, Heather Cox Richardson. She’s a great historian and her books are always worth checking out. In any case, she said, “No one has written a good novel about an anarchist.” That’s what got me started. I saw Neal’s dad pretty early on. He’s one of the few characters from that first draft that stuck around. Eventually the book became less about him and more about his son, but he looms throughout as this trickster figure.

The book took eight years or so to write. At one point it was 450 pages long and had multiple points of view. By the tenth or eleventh draft I switched it first person. That took care of a lot of the book’s problems, namely long sections of pretty boring prose. It also helped me figure out the voice: retrospective, profane, and rooted in a sort of gallows humor that helps temper some of the more horrific events in the novel.

WHY THIS TITLE?: The title refers to the name of a photograph in the book. It ties together the two sections of the novel: the war and its aftermath. It also is used by the narrator as a way to re-construct history. It’s basically a lie, but one that keeps him alive. For a while, the book was called The Anarchist’s Son. It’s probably a better title. It’s certainly sexier. But it also wasn’t honest about what the book was about, since the narrator’s identity has little to do with his father. On the other hand, I sometimes regret not picking it. It might have helped with sales.

WHY WOULD SOMEONE WANT TO READ IT? The book moves, I hope, in the best sense of the term. I wanted to touch on the usual literary goals—well-developed characters and substantive themes—but I also wanted it to be funny and engrossing. If you like mysteries or history or just hanging out with some strange folk trying to make sense of the world coming undone before them, you’ll dig it.

REVIEW COMMENTS: “The novel’s unfiltered lens reveals war’s cost to the human psyche, the amorality of concentrated wealth, the cancer of racial and ethnic hatred, and the nearly unresolvable conflict between familial loyalty and moral responsibility.”—Kirkus

“As Cormac McCarthy did with his Border Trilogy and Blood Meridian, Gutierrez is remapping the American West as a realm where easy dichotomies are nowhere to be found.”–North Carolina Literary Review

AUTHOR PROFILE: I started out wanting to be a journalist, working at newspapers back home in Los Angeles. This was in 2000, right as the Internet was killing daily papers but before anyone figured out how to make money off the web. From there I wandered the country for a few years, working odd jobs, before turning to fiction. That’s one version of the story. The other is that I was afraid to admit for a long time that I really wanted to be a novelist. I’d always wanted to write. Journalism felt [back then] like a practical way to do that. Writing novels for someone from a working class background seemed too fantastical, the providence of rich people. So I didn’t start seriously writing fiction until I attended the University of New Hampshire for my MFA. I was 26. After graduating I taught at the University of Miami and the University of Houston, before settling for the last six years at the University of North Carolina in Chapel Hill. I also managed to get married and help produce a son along the way. Right now, I’m finishing up a second novel that follows a family-owned bar over fifty years. AUTHOR COMMENTS: I began this book back in 2006 when we were in the midst of the Iraq War. It struck me then—and even more so now—that I had no idea why we were in this war. This is what led me back to World War I, another conflict where the cause was unclear, or at least unclear for the people dying. The people starting a war always know their motives. Like most literary, historical novelists, I use the past to talk to the present: World War I, like the Iraq War, was about greed and folly. I wanted to have that conversation with my readers.

SAMPLE CHAPTER: You can look on Amazon or Goodreads for a sample of the opening chapter: https://www.amazon.com/Trench-Angel-Michael-Keenan-Gutierrez/dp/1935248715/ref=asap_bc?ie=UTF8

WHERE ELSE TO BUY IT: Amazon, Barnes & Noble PRICE: $16.95 CONTACT THE AUTHOR: People can get in touch via my website: http://www.michaelkeenangutierrez.com