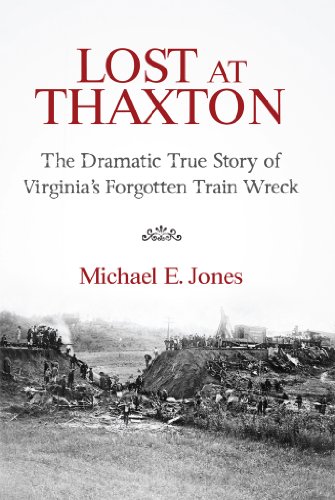 THE EDITOR: Joseph, with CreateSpace. CreateSpace would not share his last name which was disappointing because he did a great job. I’d love to work with him on future projects.

THE PUBLISHER: Thaxton Press, LLC, a company I set up to publish this book and future work.

SUMMARY: In 1889, a massive late-night storm caused a tiny creek at the foot of the Blue Ridge Mountains to turn into a raging river. The rushing waters washed away an embankment where the railroad crossed the creek. Near the small village of Thaxton, Virginia, a passenger train plunged into the washout, and at least eighteen people perished in the wreck. The survivors remained stranded with no contact or help for hours in the rain, while those who did not make it out were consumed by a horrible fire that ripped through the wreckage. In the days that followed, most of the remains found were tossed into a common and now unmarked grave in the city of Roanoke. The wreck was forgotten even in the state of Virginia, where they had memorialized train wrecks that were much less devastating. The book focuses on the people on board the train and their stories before, during, and after the wreck.

THE BACK STORY: My great-great grandfather, Tandy Jones, was the section-master in charge of the tracks where the wreck occurred. The family connection peaked my interest, but the fact that the story seemed to have slipped through the cracks of history inspired me to write about it. I wanted to memorialize the event, the lives that were lost, and the people who survived but carried the scars of that terrible night with them. I spent about two years on the research and writing, which included untold hours carefully thumbing through nineteenth-century court records and enough time in front of microfilm machines to make me ponder buying my own. My wife successfully squashed that notion but I’ve still got a spot picked out for one just in case she changes her mind during a moment of weakness.

WHY THIS TITLE?: One of the surviving passengers on the train was Alpheus Wilson, a well-known Methodist bishop who traveled all over the world. Bishop Wilson carried a particular Greek version of the New Testament with him everywhere he traveled and he lost it in the wreck at Thaxton along with many other personal items. While reading a biography on Wilson, I found that he would often mention in the years afterward that he needed something that was “lost at Thaxton.” When I saw that phrase, I knew it was the perfect title to represent the memory of those who perished in the wreck as well as their story.

WHY WOULD SOMEONE WANT TO READ IT? The story is told in a narrative form so that the reader can feel as if he or she was riding on the train that night. Even though it is written in this manner, every detail is directly related to information found through research. As I mention in the introduction, Lost at Thaxton is not “based on a true story,” but instead it is an authentic true story. The real-life drama that took place that night stands on its own. That is certainly not to say the book is infallible, but it is a genuine effort to tell as true a tale as can be told while looking back so long ago. If you like history and especially if you like those forgotten stories that seem to get left behind sometimes, I think that you would enjoy the book.

One of the most recent Amazon Reviews: “The author has a very clear writing style, easy to follow and understand. He has done an excellent job in his research, as well. The author puts a human face on the tragedy, neither embellishing nor minimalizing the event. I recommend the book and commend the author for bringing to light a little known historical incident and its effects on those involved. Railroad buffs or those just interested in a fascinating true story would find this book an excellent read.”

John Barnhart, with the Bedford Bulletin (Bedford, VA): “The result of Jones’s work is a highly readable book that’s hard to put down.”

Amazon Review: “Found this book to be very compelling and hard to put down. Reads fast and the reader is pulled along wondering who is going to live and who is not in this horrible accident”

There is a collection of other reviews at http://lostatthaxton.com/reader-reviews/ if you are interested!

AUTHOR PROFILE: Lost at Thaxton was my first book and sparked my desire to make writing more than just a side project. I have spent most of my career creating things in the tech industry but I have found I enjoy prose more than code when it comes to writing. In 2018, I completed my first fiction work (a historical fiction novella). I’ve also launched an online publication (www.historyleftbehind.com) to share more true, narrative-style US history short stories with a focus on the forgotten moments and the people who lived them. I’m a graduate of Clemson University and I currently live in Charleston, South Carolina.

AUTHOR COMMENTS: My primary goal with Lost at Thaxton was to tell the tale of a forgotten but significant historical event, memorialize the lives of the eighteen people who were lost in the wreck, and to tell that story in an interesting and authentic way. A secondary goal of mine was to get a historical marker placed at the site of the wreck, which we achieved and dedicated at the site in 2015. I was lucky enough to write the text that appears on the marker! The story of how that came together involves a car accident in Cleveland, Tennessee and an out-of-the blue phone call I had with a multi-millionaire. It is an interesting side-story and one that I share in book talks and will eventually add to the book.

SAMPLE CHAPTER: You can get a sneak peek at different chapters/sections of the book using the “Look Inside” feature at Amazon: https://www.amazon.com/Lost-Thaxton-Dramatic-Virginias-Forgotten/dp/0989004600

WHERE ELSE TO BUY IT: Lost at Thaxton is available on Amazon, Barnes & Noble, Books-A-Million, and most online booksellers. You can also order autographed copies directly from the website at http://lostatthaxton.com/get-the-book/. I’m trying to make this snowflake available in as many blizzards as possible!

One thought on “Lost at Thaxton”