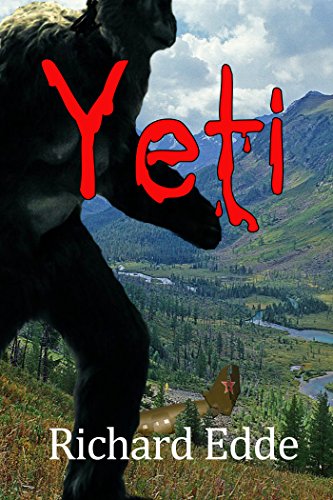 SUMMARY: Deep within the remote mountains of Mongolia there exists a heinous mystery, one the locals have attempted to keep secret for generations. Now, Harry Olson, a paleoanthropologist, is in the area excavating for early human fossils. What his team discovers threatens to turn modern scientific knowledge on its head and disrupt the peaceful harmony of the largely superstitious country. It is a discovery so appalling, so sinister, that the lives of the expedition members are at risk from a determined fossil pirate who learns of their discovery and vows to make it his own. Harry and his research team fight to outwit the man who is out to kill them and steal their find but first they must escape the terrible evil they have uncovered…

THE BACK STORY: I have always been interested in science based novels in far off locales. In particular, the field of anthropology and our early human ancestors seemed like an interesting way to manage a suspense thriller plot into a novel that pushed one’s imagination into unique realms.

WHY THIS TITLE: I have always like one-word titles. I think they are more dramatic. It was descriptive of the plot without giving away the entire storyline.

WHY WOULD SOMEONE WANT T READ IT: For one thing it is different. For another it is fast-paced. Finally, Yeti is a novel about average people overcoming incredible odds.

REVIEW COMMENTS: In Yeti by Richard Edde, Harry Olson is a disgraced and troubled scientist on an archeology dig in Mongolia, looking for signs of ancient humans. They uncover bones and teeth (from the wreckage of Soviet airplane from the late 1960s, of all things) a discovery that starts them on a journey of terror, danger, and death, taking us along with them through the beautiful and rugged mountains and steppes and monasteries, where they inadvertently discover a terror more terrifying and deadly than the wealthy pirate who wants to kill them and steal their find. The book is incredibly interesting and I learned a lot about both Mongolia and archeology. With a strong plot, lots of action, and plenty of heart-stopping suspense, it’s a hard book to put down once you pick it up. ~ Taylor Jones, Reviewer

Yeti by Richard Edde is a fascinating tale, set in the mountains and steppes of Mongolia. Our protagonist, Harry Olson, is in Mongolia digging for ancient human remains. Wanting to recoup both his self-respect and his mentor’s forgiveness after making a disastrous and unethical mistake, Harry is desperately hoping for an important find to cement his reputation. When they discover the remains of a plane crash, he is naturally disappointed – until they find ancient bones and teeth among the wreckage. Little does Harry realize the effect those bones will have in his life, on the lives of his associates and friends, or on science itself. Their quest for the truth takes Harry, his assistant Dixie, and their foreman Li, on a hazardous journey into the remote backcountry of Mongolia, where they stumble upon horrors they could never have imagined. Yeti is well written, with a solid plot, a number of smaller subplots, plenty of fast-paced action, and enough edge-of-your-seat tension to keep you turning pages well into the night. ~ Regan Murphy, Reviewer

A great read, that kept me turning the pages! Richard has given us a non-stop adventure that rolls towards the ending I (secretly) hoped for but could never be sure of as the action charges along, from different continents and across time zones, until it finally converges in remote Central Mongolian wilderness. Tons of interesting detail for those of us who want military realism and biological fact. And he makes a clever case for the fantastical; the presence of living yeti in unexplored mountains. Recommended!

AUTHOR PROFILE: Richard Edde was born and raised in Oklahoma. After graduating from Central State College, he attended the University of Oklahoma College of Medicine, where he earned his medical degree in 1971. After spending a few years in family practice in two rural Oklahoma towns, he completed a residency in anesthesiology. Following a long career in academia and private practice, he retired to devote time to writing. The first of his Yeti trilogy was released in 2015. Dr. Edde resides in eastern Oklahoma with his wife.

AUTHOR COMMENTS: Yeti is the first book in my Yeti trilogy. It is followed by Yeti Unleashed and ends with Yeti Reborn.