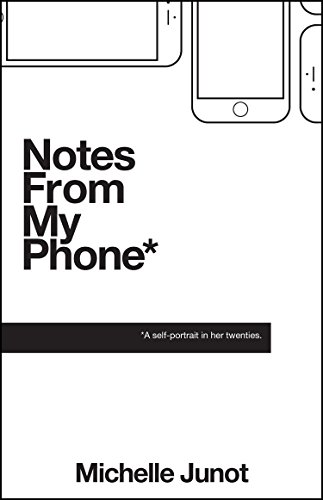 OUR OTHER CURRENTLY FEATURED BOOKS, “WAITING FOR YOU AT MIDNIGHT,” BY VICKI SALLOUM AND “SORROW BREAD,” BY MARK COX, CAN BE FOUND BY SCROLLING DOWN BELOW THIS POST, OR BY CLICKING THE AUTHOR’S NAME ON OUR AUTHOR’S PAGE.

THE BOOK: Notes From My Phone: A self portrait in her twenties.

THE PUBLISHER: Mason Jar Press has been publishing handmade, limited-run chapbooks and full-length books since 2014. The Press is dedicated to finding new and exciting work by writers that push the bounds of literary norms. While the work Mason Jar seeks to publish is meant to challenge status quos, both literary and culturally, it must also have significant merit in both those realms. 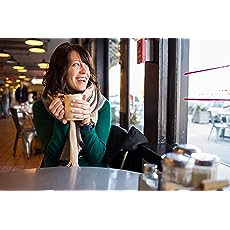 SUMMARY: Michelle Junot has kept notes on her phone for years—what to pick up at the store, work-out logs, prayers, hopes, thoughts on life and death—all the while creating a snapshot of her life with an honesty that only occurs when not paying attention. In Notes From My Phone* (Mason Jar Press, 2016), Junot opens up her phone and her life to you.

This collection of essays, to-do lists, vignettes, reminders and dreams mixes heart-felt memoir with the everyday marginalia that makes up a twenty-something’s life and day planner. The everyday is placed side-by-side with the universal, and in doing so, transcends to be more than the sum of its parts. If, “Life is what happens to you while you’re busy making other plans,” then Notes From My Phone*, celebrates life in all its tedious and troubling beauty.

THE BACK STORY: Publication of Notes was somewhat accidental. In 2014 I was on a plane headed to Louisiana, and as the plane sped down the runway, I realized I needed to jot something down. I couldn’t reach my physical journal, so I grabbed my phone. When I started paging through the notes section, I found a time capsule of my my life since I moved to Baltimore. A lot of the entries were actually quite embarrassing. It was the kind of moment when you glance over at the stranger next to you to make sure they aren’t reading over your shoulder.

I told a friend about the found collection, and I even blogged a handful on my website, but nothing really came of it. The friend urged my not to get rid of it though. I went back to my normal note-taking and kind of forgot about the project altogether. A few years later that same friend started Mason Jar Press. A year after that, MJP approached me with a contract.

WHY WOULD SOMEONE WANT TO READ THIS? People will want to read this book because, although it’s about me, it’s not really about me. It’s a self-portrait, yes. It portrays my thoughts and experiences, yes. But more than that, it’s a book about the human condition in its beauty, its devastation, its disappointment, its joy, its struggle, its ridiculousness, its mice, and its authenticity.

It’s both quick and unhurried because of the way it was written (and not written as it were). It mirrors real life in a way that another book couldn’t with straight prose or narration. Because the narrator is largely unaware of the audience, the book is not trying to convince you of anything or “spin” anything.

When people read it, they feel permission to rest in those same unedited feelings of disappointment or even hopelessness in their own life experiences. It’s like going over your problems with a friend who listens and doesn’t try to fix you. From the feedback I’ve received, the content seems to make people feel known. It’s odd really–to read something and feel heard.

That’s been the joy of this book. A handful of people have reached out to me to tell me the book helped. The first one was actually a dear friend who went through a breakup right as the book came out, when I was still uncertain of the project. My loneliness on the page helped her in someway not feel so lonely during those first few weeks because it was a shared “hey…so this sucks and I have no idea what’s next. But I’m not alone.”

Notes From My Phone is a tender, honest, and hilarious account of a middle-class modern day twenty-something who eventually becomes self-aware. “I have this unrealistic view of my own heart,” Junot reflects. Her insight is emotional kindling to stoke your personal epiphanies. —Diana Mumford, Monologging http://monologging.org/notes-from-my-phone.

The frank, confessional tone of passages like those — and the book’s sparse interior layout — makes the reader feel almost voyeuristic by the end. It’s like finding your outwardly stable older sister’s journal and discovering her hidden frailties; this book genuinely doesn’t read like something that was meant for other people to see. In that sense, it’s unlike any memoir I’ve ever read before. Both in structure and execution, Notes From My Phone* resists the urge to show off, and therein lies its strength. —Dave K., LitPub.

Junot’s stream-of-consciousness memoir is clearly for those who appreciate slapdash bursts of humor and unabashed honesty. But even if that’s not your literary forte (though if it isn’t – what’s wrong with you?), Notes From My Phone still offers reassurance for everyone that it’s ok to acknowledge and entertain those temporal fears of ours that the outside world can’t see. Personally, Junot’s book gave me hope that the next young girl I come across while out running errands isn’t just playing on Snapchat, she’s carefully curating her life’s craziest and most mundane moments as well. —Michelle Dwyer, Queen Mobs http://queenmobs.com/2016/11/michelle-junot-notes-from-my-phone/

AUTHOR PROFILE: Originally from Southern Louisiana (although no one believes her when they hear her lack-of-accent), Michelle Junot is a writer, graphic designer, and copy editor living in Baltimore and dreaming of California.

She is the author of Notes From My Phone* a self-portrait in her twenties, and of and the floor was always lava, a collection of essays exploring childhood and memory.

Michelle earned her M.F.A in Creative Writing & Publishing Arts from University of Baltimore and her B.A. in Communication and Dance from Centenary College of Louisiana.

AUTHOR COMMENTS: In the two years since Notes From My Phone* was published, I’ve developed an appreciation for the book beyond my own pride at having something that is mine out in the world. At it’s most basic, the book is a collection of privileged reflections (and maybe even some whining) that reflects my privilege and bias in ways that are uncomfortable to see in print.

The entire book is a testament to the power of leading through weakness instead of traditional concepts of strength. So often, we try to build ourselves up, or show how we’re the best at x, y, and z, how grand our lives are. But, at least for me, behavior like that always leaves me feeling a little like an imposter. Like I have to keep up the “neat and tidy” facade. It’s exhausting. Aren’t other people exhausted by their seeming “awesomeness”?

This book messy. It’s not polished. It doesn’t even know if it’s poetry or non-fiction…and yet I would argue it has a strength to it. Quiet, subtle power, sure. But it’s mattered to a lot of people who read it, and it’s certainly changed a lot of the ways I cope, write, and connect with other people.

There’s not much that’s unedited in our world today. I’ve said to people before, if what you put on Facebook is your “highlight reel,” than this book is what got edited out. I think there’s power in that, and I think our world would be a little less screwed up if everyone felt like they could admit failure, realize they aren’t perfect and can’t be perfect, and learned to own their faults and have a sense of humor about themselves more.

All that to say, I think it takes strength to be weak sometimes and admit failure. It’s not fun. But it also makes you stronger, and honestly, more relatable to every other person who has ever existed.

We often picture an outcome and work backwards from that vision, but creativity is about working forward, not necessarily having a concept of where you’re going.

What I really want to know is how I end up—what’s the end of the story?

But here’s the thing:

Because if I’d known I’d fall in love with a man or two or three who didn’t or couldn’t or thought he shouldn’t love me back, I might have never tried at all.

And then where would I be?

Growing up is critical. Knowing how it will end should be avoided. Because hope is what we run on, and without hope, we’d all be lost.

Waiting is active. Waiting is a whole body activity. Waiting is preparing. Getting ready. Ready to move. To sprint. Waiting is a bending at the knees. A bowing in worship. Waiting is today. Today is waiting and being ready because I have no idea what tomorrow will bring.

Will I be ready?