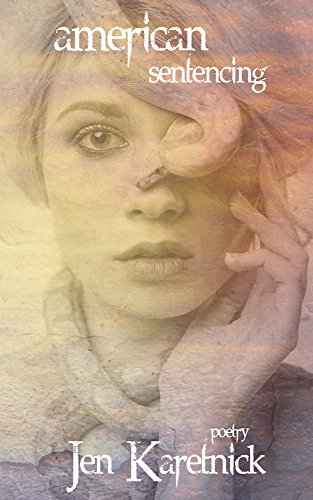 THIS WEEK’S OTHER FEATURED BOOK, “COLD MIDNIGHT,” BY BETH KANELL, CAN BE FOUND BY SCROLLING DOWN BELOW THIS POST, ALONG WITH THE FIRST TUESDAY REPLAY. OR, JUST CLICK THE AUTHOR’S NAME ON OUR AUTHORS PAGE.

SUMMARY: American Sentencing is a book of poems about chronic and invisible illness in all its forms, both physical and mental. It looks at various autoimmune diseases, cancers, bipolar disorder, clinical depression, Alzheimer’s, and more. It investigates prognoses, symptoms, and complications from a variety of perspectives–not just from those who suffer from them, but from the caregivers’ point of view as well. The invisibly ill walk through life on a fraught path, and those who walk with them encounter the same obstacles but in a different manner. As someone who lives with several invisible illnesses, I wanted readers to be able to see what happens to us and to those who take care of us. Eventually, everyone suffers from a chronic condition. Unfortunately, it’s usually not real until it happens to you.

The book is also very Western medically oriented, partly because my husband is a neurologist, so I understand too much medicine for my own good–doctors hate patients like me–and partly because I find medicine to be fascinating in its naming of diseases and symptoms. When you get into the etymology of medical words and terms, there’s poetry.

THE BACK STORY: This is a collection of 20 years’ worth of poems. I’d always written about medical topics and illness, but I realized one day that I had enough of them to put together as a collection if I added some glue to the fabric. That glue was a few particular poems that told a little bit of my mother’s story. Certain conditions are genetic in our family, and in Ashkenazi Jews in particular. I had written about my grandmother, myself, and my daughter, but I realized then that I was missing a generation. Those poems eventually became the raison d’etre of the book, and one of them became the title poem.

WHY THIS TITLE?: American Sentencing has several meanings. An “American Sentence” is a form that Allen Ginsberg invented in response to the interpretation of the haiku–a sentence with 17 syllables. I wrote several of those sentences and then used them vertically as the first words of the lines in the poems about my mother’s struggles in having me. Metaphorically, our American Sentence is a chain of events is about how chained we are to Western medicine. My mother was very ill while pregnant and they’d just invented amniocentesis–but had not yet invented sonograms. So they’d just guess where I was. They also didn’t know yet about the risk that amnio carried with miscarriage, so they poked her a few times. After I was born, a few weeks early, she was diagnosed with sarcoidosis. And in another way, the American Sentence is also our heritage as Ashkenazi Jews who have always married and had children with other Ashkenazi Jews. When there are so few of your ethnicity or race left in a country–or the world, for that matter–how can your genes not be broken?

WHY WOULD SOMEONE WANT TO READ IT? Anyone who has ever been ill–and that includes all of us, because who hasn’t had a cold or the flu–can identify with at least one poem in this book. But the poems aren’t all about sadness and death. Some of them are, yes. But many more of them are about the mystery of how we go on living in the bodies we’ve been dealt, in the landscapes that we’ve chosen for ourselves, with the joys that we can discover, with humor that shouldn’t be discouraged, with gratitude that should be uncovered and examined every day.

“The collection is an eerily accurate portrayal of how our culture encourages us to push through our tortured thoughts and strains. That we, like the cover of the collection alluding to the Garden of Eden, are sentenced to life on Earth with inescapable pain. But just because it is called American Sentencing does not mean it cannot be enjoyed by anyone else who is human. ” –Gretchen Gales, Quail Bell Magazine , http://www.quailbellmagazine.com/the-real/review-american-sentencing.

“Whether playful or grim, the poems in American Sentencing are open and insightful. Karetnick is skilled at taking ordinary emotions and experiences and buoying them with striking images to create nuanced works. In American Sentencing, she takes this a step further by commingling themes of unseen diseases with unmet expectations and untimely death. A difficult trio, but by meeting them head-on, Karetnick manages to succeed.” –Bonnie Losak, Florida Book Review,

AUTHOR PROFILE: I’ve been writing as a MFA-trained poet (University of California, Irvine) and also as a professional food critic and lifestyle journalist since I was 24. The two vocations, at the time, confused a lot of people, but they always made sense to me–I loved both subjects, and had always worked throughout high school, college, and graduate studies as a food server. So eventaully, I knew both businesses, and married them in my first full-length book, Brie Season (Kelsay Books, 2014), which is all food-and-beverage poems. Of course, food is just the medium–these poems are also thematically about society, cultural and familial expectations, race and ethnicity, and more. I suppose you could say I like project books. The Treasures That Prevail (Whitepoint Press, 2016), my third full-length collection, which was a finalist for the Poetry Society of Virginia Book Prize in 2017, is a dystopian look at climate change in low-lying coastal cities like Miami. I’m also the author of several trade books, such as my cookbook Mango (University Press of Florida, 2014) and my guidebook, The 500 Hidden Secrets of Miami (Luster, 2017). I’m just starting my 17th book, a cookbook for Skyhorse Publishing, and I’m shopping two poetry manuscripts, a chapbook called The Crossing Over, about migrants in the Mediterranean told from the boats’ point of view–this one has been a finalist in three competitions–and a full-length eco-poetry book called International Trapeze Acts of Fire & Water. You can find my poems and my articles in a wide range of publications, including TheAtlantic.com, Guernica, Missouri Review, TheMuse.com, Painted Bride Quarterly, Today.com, USA Today, Verse Daily, and Waxwing. Oh, and somewhere along the way I earned a second MFA in fiction at University of Miami, and became the director of a creative writing program for grades 6-12 at a charter school for the arts. I’m also co-founder/co-editor of an online journal for women-identifying poets called SWWIM Every Day (swwim.org)–we’re always open for submissions and publish every weekday.

AUTHOR COMMENTS: Although I write about several different invisible, chronic illnesses in American Sentencing, there are two in particular that I wanted to bring to the attention of the public: early-onset bipolar disorder, which my daughter was diagnosed with when she was eight, and ME/CFS–known dismissively as Chronic Fatigue Syndrome–which is a neuro-endocrine-immunehttp://www.floridabookreview.net/poetry.html disorder that I’ve battled since I was 24 after contracting viral meningitis.

There are three poems, with editorial commentary, at this link:

LOCAL OUTLETS: I have books in the independent bookstore chain in Miami called Books & Books, which is also in the Miami International Airport, Key West, and a few other places.

WHERE ELSE TO BUY IT: Amazon, Barnes & Noble, and probably eBay, to be honest.

One thought on “American Sentencing”