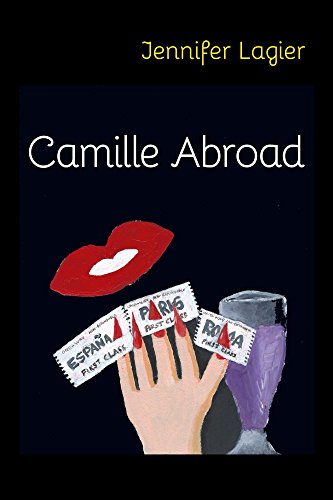 THE PUBLISHER: FutureCycle Press, http://futurecycle.net. Founded in 2007 by long-time editor/publishers and partners Diane Kistner and Robert S. King, FutureCycle Press incorporated as a nonprofit in 2012.

THE BACK STORY: As a “good” Italian, Catholic girl, I always envied those who ignored the rules. Camille was the perfect vehicle to express my fantasy alter ego. Over the past few years, I’ve written a series of Camille poems about situations in which she could provide my repressed, irreverent self the voice I wish I possessed.

WHY THIS TITLE?: My friend, the writer Charles Rammelkamp, helped me choose this title which is a double entendre–Camille venturing further afield is also “a broad” with an attitude.

WHY WOULD SOMEONE WANT TO READ IT? Anyone who appreciates a bit of sarcasm, especially women who recognize each situation and Camille’s reaction, can appreciate these poems.

REVIEW COMMENTS: “Jennifer continues her saga of the modern, empowered woman taking her show on the road to Europe, mostly in Spain.  While she is intent on asserting herself, as a liberated woman of a certain age, drinking, having sex, and generally enjoying the pleasures of the flesh, all is not pisco sours and flan. In Spain the streets are commandeered by heavily armed paratrooper types, giving the place an air of a police state, suggesting, the future will look like this and future may be now.  And older age is a nasty bitch. She confesses every part of her body has its own doctor.  The body she used to take for granted now aches, but she is neither discourage nor cowed. Sex is fine, mature sex, with experienced, appreciative partners. Good wine, and the occasional cocktail, is an adequate replacement for over indulgence on whatever made you high. Camille Abroad is the work of fine poet at the top of her powers and all readers, not just women, can enjoy the journey with Camille.” — Alan Catlin, Misfit Magazine

AUTHOR COMMENTS: Camille speaks to the many older goddesses out there who are fed up with marginalization and muteness.

WHERE TO BUY IT: Amazon, Barnes & Noble