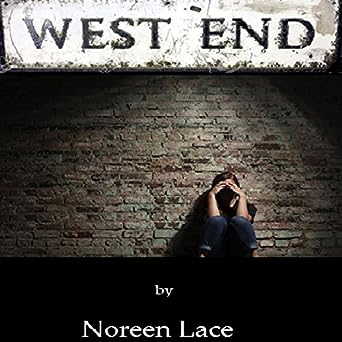 OUR OTHER CURRENTLY FEATURED BOOKS, “CAMILLE ABROAD,” BY JENNIFER LAGIER AND “THE GHOST IN THE GARDENS,” BY H.L. CARPENTER, CAN BE FOUND BY SCROLLING DOWN BELOW THIS POST, OR BY CLICKING THE AUTHOR’S NAME ON OUR AUTHORS PAGE.

SUMMARY: A haunting story of the decay of an urban neighborhood; the narrator witnesses her mother destroyed, friends disappear, and her sister leave. She feels she needs to escape to save herself.

THE BACK STORY: This began as a short vignette about a child witnessing the death of a squirrel. My readers wanted to know more about the girl, and so did I. Based on a real neighborhood on the West Side of Cleveland, I created this unnamed narrator and she became witness to decay and destruction. Her desire to escape without knowing how has stayed with me.

WHY THIS TITLE?: Where we grow up plays an important role in how we move through life. There’s a west end in every city, in every mind.

“The novella has always been one of my favorite forms because it forces a kind of economy in the writer. It takes a good writer to master this form and I believe Noreen Lace has achieved that mastery. Her haunting portrayal of life in a dying mid-western city is spot on. The narrative character internalizes the decay of her environment to devastating consequences. A lovely little jewel of a book!” — Beverly Rousseau

“Intriguing. Poignant. Captivating. This deeply insightful story touches the reader’s heart and soul as the narrator describes the increasing decay taking place in her community which mirrors her own downward spiral into darkness.” — A Texas Fan

“Once I began reading it, I couldn’t put it down until it I knew what happened with each character. Doe’s (brilliant name choice) despair in her darkest moments, and her recovery was identifiable.” — Anonymous.

AUTHOR PROFILE: I grew up in a very poor (and sometimes dangerous) neighborhood. There were times when my mother had to pawn her wedding ring to buy us food. (Fortunately, she always got it back). We didn’t have much, but I did have notebooks. I spent the hours in my room writing. I recently found a “novel” I wrote when I was about eleven. It’s a torrid little story about a girl who is kidnapped because she witnessed a crime. I was not one to write love poems or love stories – but deeply emotional vignettes about loss and the desire to overcome.

AUTHOR COMMENTS: Many people feel stuck, lost, as if life has worked against them, but what I see is challenges to be overcome. I feel like if I can come from where I did, overcome what I’ve had to face, then anyone can improve their lives, their mental states, change their circumstances. It takes more courage than they think they have – but it can be done.

Before my mother drank herself to death, I knew her as a gentle creature who fed wild squirrels from her hand.  On the back patio at mid-day, she’d stand very still, calm, peanuts laced in the fingertips of her outstretched hand. The squirrel, a female, her babies came later, approached with caution, across the railing, onto the windowsill, grab the nut, run to the other side of the patio where the squirrel peeled back the shell, ate the meat, then returned for another and another. For a while, the squirrels became my mother’s greatest pleasure.

When the female squirrel stopped coming, my mother worried, but the baby squirrels continued to visit. Then, the cubs must have grown, left the nest, because one by one they disappeared until only a single squirrel came to the daily meeting.

That winter, mother’s heart sucked itself dry. Familiar faces appeared, distant relatives, long-ago friends, who talked our concerns away with assurances for tomorrow and beyond.

“Little honeys, it will be okay.”

“She was a wonderful woman.”

“Call if you need anything.”

Sarah and I stood at the door where someone’s aunt told us to stand. We pointed people who carried in food to the kitchen, guided people with flowers to the dining room, pointed the rest to Daddy who sat on the couch, gaze glued to the floor. We didn’t have to say anything, and no one asked.

The familiar strangers came and went and with them, our mother, our hopeless youth, our language.

The house became quiet. I couldn’t remember the last complete sentence I spoke or heard, couldn’t remember the last partial sentence I’d said to my father or he to me. My sister and I exchanged words, hushed, sometimes soundless breaths only we knew the meanings for. We lived our lives in half-words, pale sounds that sunk into the silence, in ideas of what we had to do next: breakfast, school, homework, laundry, dinner, dishes, bed. This soundless process became our lives; a strange off-balance way to live, but we did it for some months content not to break that pattern.

One cold February morning, a descending snowstorm blocked the roads, locked us indoors, kept us from going to school, our father from his work. Our first full day alone together in the house. Sarah and I sat at the painted brown kitchen nook picking at our cold Raisin Bran; the milk just tangy enough for us to question the freshness. A tapping noise brought our eyes to each other’s. Then silence.

“Wind.” Sarah exhaled with barely enough voice to make a sound much beyond the breath itself.

“Yeah.” My voice not much stronger. We returned to the cereal.

Her gaze followed the floor to the sink, the counter, the back door.

I slipped from the nook; she followed. We stood, somewhat unnerved when the tapping came again. We could see through the glass in the door; no one stood there. I moved to the windows to get another view of the patio, leaned over, heard shuffling, then rattling against the window. We jumped. A squirrel clattered against the window, caused us both a momentary and laughable fright. Sarah touched my arm. We each took a deep breath. Our first that winter. The squirrel, the female or one of the children, we didn’t know and could never tell anyway, gave us a quizzical look, stretched up against the window; her little paws stretched against the glass. Tears welled. Quiet, unmoving, we held our breath, each other, tried not to let out the flow of emotions the winter built up.

Father’s footsteps, heavy on the linoleum, came toward us. We straightened.

“Shhh,” we both hushed him; his rough, dry voice might drive the squirrel away.

She motioned toward the window. “The squirrels Mom used to feed. She used to give them nuts.”

“Well, give it some.” He waved his hands at us.

“Where are they?” Sarah pulled open random cabinet doors.

“I don’t know.” I opened the opposite cabinet doors.

“Well, look, look. They have to be here.” Father took to the drawers.

The three of us searched for a bag of peanuts Mother bought for the squirrels, hid from us to deter our snacking.

“He must be hungry.” Father gazed out the window at the back yard covered in snow. The porch railings, the powerlines, all draped in sheets of white; the squirrel, nervous, waited at the end of the banister. “Peanut butter. Get the peanut butter.”

“Will he eat that?” Sarah reached for the jar.

I grabbed for the bread.

“Just spread it on,” he said, more animated than I’d ever seen him.

“Wait, he can’t eat it like that Break it up.” He put his hands in the mess with ours.

Of course, we knew, but at the moment, that strange, unsettling, yet somehow comforting moment, we all needed to take part.

Sarah set the plate on the patio just outside the backdoor. The squirrel chattered, juddered its head from her to the door, the windows, its tail jerking back and forth as if with nervous jitters, then approached the plate, took a piece, and skittered back to the railing to eat it.

Dad ordered us away from the window. The little squirrel tittered, danced delicately, tail flitting, to take more food. We backed out of the kitchen.

Something shifted inside the house. The rooms warmed. The silence faded. The house took on old noises; the refrigerator hummed; the kitchen light buzzed; switches flicked with their old sticky clicks.

Our voices returned. We spoke more than mere sounds. We’d broached full sentences. But I don’t know if we ever surpassed that. We’d never been a family of paragraphs or stories. Laughter rarely rose to the ceiling. Now, with one of the speakers forever hushed, we were destined to be something less than complete.

Winter dissolved into spring; the strawberries mother planted last summer grew green, red, wild. We left nuts out all the time. Sometimes squirrels ate them; sometimes they’d sit until the birds got them or the ants swarmed them.

Sunrise reopened in summer, but never again did we hear our names called from the front patio as we walked up the street, never again did the light intonation of words follow us through the night, “not too late,” never again, upon our return, would we be met with a drunk asleep on the table with just enough consciousness to whisper “too late” when we passed through the kitchen to go to bed.

WHERE TO BUY IT: Amazon, Barnes & noble, etc. And other places