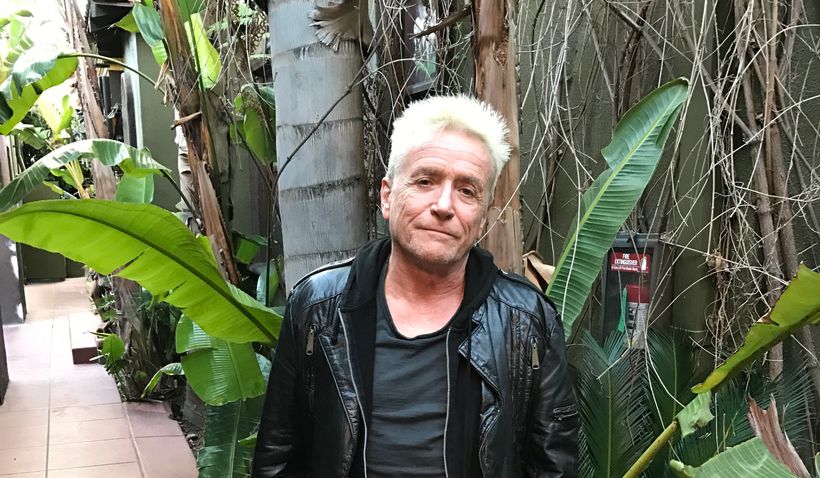 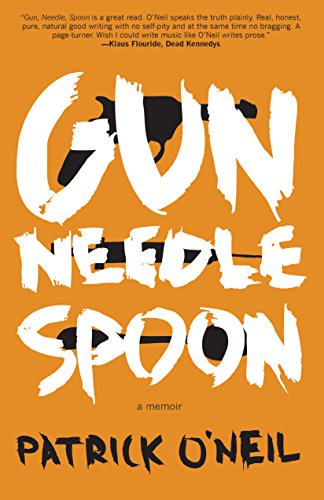 SUMMARY: Before his life went totally off the rails, Patrick O’Neil was living the punk rock dream, working at San Francisco’s legendary Mabuhay Gardens, going on to become a roadie and then the road manager for such seminal bands as Dead Kennedys, Flipper, Subhumans, and T.S.O.L. But that was before his heroin addiction veered totally out of control. A junkie for eighteen years, O’Neil, the educated son of intellectuals, eventually turned to a life of crime, ending up the ring-leader of a group of armed bank robbers, all in an increasingly out-of-control attempt to keep himself and his girlfriend in drugs. Now, after a stint in prison and fourteen years clean off drugs, O’Neil takes a look back at the experiences—moving, calamitous, and at times both hilarious and terrifying—that led to his downfall and recovery. Told in sparse prose and graphic detail, Gun, Needle, Spoon examines the long road to redemption, and the obstacles along the way, demystifying the “criminal life” so often depicted in film and fiction, but seldom written about from the first-hand point of view of those who have lived it.

THE BACK STORY: I got busted for armed bank robbery in 1997. I was strung-out, physically destroyed and looking at doing 25 years to life in prison. While I was awaiting trial in county jail I was stuck in a cell for 23 hours a day with a serial-killer cellie. He and his girlfriend had been busted for “befriending” old men and then killing them by poisoning them in order to steal their property and wealth. He was constantly offering me cookies and candy and I’d say, “Hell no George, you poison people!” After a few months, I’d do anything to get out of our five-by-10 foot cell. In San Francisco, at least back in the ’90’s, they offered adult education classes, and one of them was creative writing. Now, when you’re incarcerated there’s not a whole lot of options for creative self-expression; I had always been a storyteller as a visual artist and then a musician, so it wasn’t that far-fetched to try my hand at writing. Only I hadn’t read a book or scribbled even a short sentence in many years. I was practically illiterate. Yet boredom and adversity breed creativity, at least for me it did, and I started writing long diatribes against “the man” for keeping me down, and these short stories about the crimes I’d committed and the people I’d run with for the last few years. I was also reading a much as I could get my hands on. I read Edward Bunker’s Education of a Felon, and I knew I could write like that. I’d read George Jackson’s Blood in My Eye or Eldridge Cleaver’s Soul on Ice and wish that I could write like that. I’d try and read crap like Dean Koontz and end up throwing it across the cell. But I read a book a day and when I was eventually convicted and sent to the big house I kept writing. When I hit the mainline I joined a creative writing group. Every week I’d share my work with my fellow convicts and get nods of approval. My “stories” started to evolve into longer pieces of creative nonfiction, and I started thinking of myself as a writer. Then one day, out on the yard, a giant corn-fed thug, his skin covered in swastikas, sided up to me and handed me this book: “Yo, ya gotta read this, bro.” At first I was just really stoked he didn’t stab me, but then I realized he was a member of my writing group. When I read the book, Anne Lamott’s Bird by Bird, it changed my perspective. It not only made me want to be a better writer, but I knew I was going to be one.

WHY THIS TITLE: My working title was “Opacity” – which was a design reference to a color’s density lacking transparency. I originally intended it as a play on words regarding memory not always being clear. I even submitted the memoir with that title to a few agents and indie presses (and received rejections). When I asked a friend to read the final draft and she wanted to know what the title meant I realized it was confusing and wasn’t working. A few weeks later I was driving in the Mojave Desert up by Joshua Tree with my friend and fellow author Rob Roberge. I was complaining that my title was horrible, but was stumped on composing a new one. He said, “What’s the book really about?” I said, “Guns, needles, spoons…” listing off the subject matter, and then realizing I had the title.

WHY SOMEONE WOULD WANT TO READ IT: You might want to read my memoir if you’re in recovery, thinking about getting into recovery, have a loved one that is in recovery, or know someone that should be in recovery. It’s not a cautionary tale of the horrors of addiction, or even a scared straight after school special. It’s a story of redemption and perseverance. Parents, wives, husbands, significant others, and children of addicts have written to me thankful for the insight into what their loved ones have and are experiencing and dealing with. Forgiveness starts with understanding and compassion. Gratitude comes from how we are able to help one another.

Also, if you’re into junkie lit, true crime, and addiction memoirs, than this book might be for you as well.

And lastly, I come from the original punk rock era of the late ‘70’s early ‘80’s and my memoir might make sense to a lot of aging punk rockers out there – in other words the mom and dads of today. Although I taught English at a community college for over nine years and it saddens me to say that none of my students read. Not for pleasure, not for educational purposes, not newspapers, or even the owners manual for their TVs. So these days I am always amazed when anyone wants to read—my work, or anybody else’s—so I thank you in advance if you do.

“The omissions, the prose, and the patience with which he tells his frequently disturbing tale all add up to a whole greater than the sum of its excellent parts. Patrick O’Neil is a fantastic writer, and this is a hell of a debut.”– Michael T. Fournier, Razorcake

“Gun, Needle, Spoon is a work of tremendous courage, one which strikes a perfect balance between bluntness and beauty—O’Neil is a truly gifted storyteller—and gives readers a peek behind the curtain of a life most have only ever seen in fiction.” — — Elizabeth A. White

“That’s why I find Gun, Needle, Spoon so compelling. It dramatizes a big addiction in a way that sheds light on our little addictions. We’re addicts, but not heroin addicts. If O’Neil can come back, so can we.” — — Art Edwards, Entropy Magazine

“Patrick finds a way to dance on the razor’s edge of emotion while not becoming sentimental.” — Jacob Singer, Curbside Splendor

“O’Neil either doesn’t give a damn what you think, or he simply trusts the reader to be smart enough to make their own judgments. He offers his story with grim humor and unsettlingly vivid imagery.” —  Gabriel Ricard, Drunk Monkeys

AUTHOR PROFILE: Patrick O’Neil is the author of the memoirs Gun, Needle, Spoon (Dzanc Books) and Hold-up (13e Note Editions). His writing has appeared in numerous publications, including Juxtapoz, Salon.com, The Fix, The Nervous Breakdown, After Party Magazine, and Razorcake. He is a contributing editor for Sensitive Skin Magazine, a Pushcart nominee, and a two-time nominee for Best Of The Net. He holds an MFA from Antioch University Los Angeles, and is the co-coordinator for the Why There Are Words, Los Angeles reading series. For the past 17 years he has lived and worked in the recovery community as a recovering addict/alcoholic, a drug and alcohol counselor, a college instructor, and a narrative therapist. In 2015 the State of California granted him a Certificate of Rehabilitation. In 2016 California Governor Edmund G. Brown awarded him a Governor’s Pardon. He has taught writing workshops in numerous correctional facilities and institutions and continues to be of service to his fellowship and community. O’Neil currently lives in the MacArthur Park/West Lake district of Los Angeles, with his wife Jennifer, and two rather large Maine Coons.

AUTHOR COMMENTS: A good sixty percent of the first half of Gun Needle Spoon was my thesis for grad school. I began my MFA studies with a definite vision of the book I wanted to write and I concentrated on completing it. The final draft of that manuscript was a slightly shorter version of what would ultimately become Hold-Up (my first memoir translated into French and published in France). After graduating grad school I wrote a “part two” —a “this is me now” part to the memoir—and

I eventually got an American publishing deal with Dzanc and worked with Editor-in-Chief Guy Intoci on a complete re-write/revision that became Gun Needle Spoon. It was a long journey to getting published, but the final results were well worth it.

Here is the opening chapter to Gun, Needle, Spoon published by The Nervous Breakdown

WHERE ELSE TO BUY IT: Dzanc Books, Powell’s, IndieBound, Amazon, and Barnes & Noble.