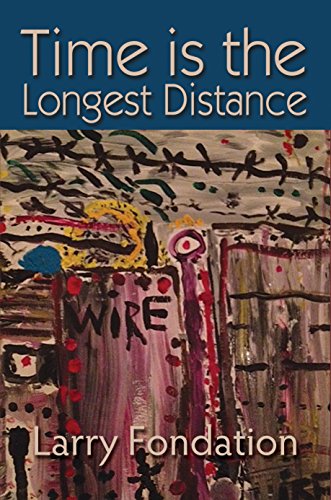 THIS WEEK’S OTHER FEATURED BOOKS, “GUN, NEEDLE, SPOON,” BY PATRICK O’NEIL AND “SPRING INTO LIGHT,” BY EMANUEL KANE, CAN BE FOUND BY SCROLLING DOWN BELOW THIS POST, OR BY CLICKING THE AUTHOR’S NAME ON OUR AUTHORS PAGE.

THE BOOK: Time is the Longest Distance

SUMMARY: Lawrence is homeless. Unlike the vast majority of the homeless population, however, Lawrence had been a graduate student before living on the streets. He had not been a scholar of any special talent or renown, but rather an awkward, bookish man who studied literature. He has a notion about a connection between Nathaniel Hawthorne and Nathanael West, and he had wanted to write a dissertation about it. Then he had an unspecified nervous breakdown, and found himself on Skid Row in downtown Los Angeles. 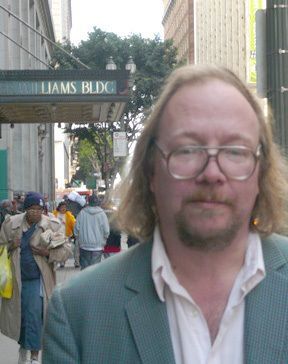 The story takes place during the course of 2005-2006, prior to the global economic collapse that began in 2008. Of course, Skid Row had been “collapsed” for a very long time. But during the early part of the decade, civic leaders and developers saw an opportunity to extend downtown LA’s revitalization to the areas around Skid Row, which had become a burgeoning art district. Proponents saw Operation Clean Sweep as a way to reduce crime on Skid Row; opponents saw it as a way to clear out the homeless for good.

Time Is the Longest Distance does not delve into that debate overtly or politically, but rather tells Lawrence’s story against that backdrop. Lawrence is articulate, and sometimes lucid, but more often not. He is well-read, and frequently sees current events through a historical lens – principally, though not exclusively, via Puritan New England. For example, he views the arrests by the LAPD and the prosecutions in LA County Court of drug dealers and other violators of the law on Skid Row as a recurrence of the Salem Witch trials of 1692.

Lawrence has fantasies (hallucinations) and obsessions. When he sees parking meters replaced, he stuffs the stems with sundry and quotidian found objects, making “time capsules,” before the new meter heads are installed. He worries over a stray piece of blue thread in his occasional home – a Single Room Occupancy (SRO) hotel. But two things concern him most: a “lucky quarter’ he believes his mother gave him long ago and Bekah, a young woman he meets while standing in line at a soup kitchen.

THE BACK STORY: I’ve been writing about the homeless since the publication of my third book, Fish, Soap and Bonds. I believe that displacement and poverty – whether in Syria, in South Sudan or on Skid Row in Los Angeles represent the most pressing issues of our time. It took me 2 years to write the book. This is the most and the least autobiographical of my books.

WHY THIS TITLE? It’s a quote from Tennessee Williams, The Glass Menagerie, and it relates to homeless people because they don’t have the means and the ability to move around, but they have plenty of time, empty time.

WHY WOULD SOMEONE WANT TO READ IT? Homelessness has touched almost every neighborhood in America. I present an alternative view of the lives of homeless people and a day-to-day narrative of their experiences, thoughts dreams and struggles. Our understanding of the homeless has to begin with our common humanity.

“Fondation strips his of an interiority meant to make them more universally familiar, engaging the reader with the dispossessed on their own impossible terms.” – Santa Fe Reporter

AUTHOR PROFILE:  Larry Fondation is the author of Angry Nights and Fish, Soap and Bonds, Time is the Longest Distance, and of Common Criminals, Unintended Conse-quences and Martyrs and Holymen, all three are collections of short stories. His fiction focuses on the Los Angeles underbelly. Three of his books feature collaborations with London-based artist Kate Ruth.

Fondation has lived in LA since the 1980s, and has worked for nearly 20 years as an organizer in South Los Angeles, Compton and East LA. His first three books are being published in France by Fayard. The first, Angry Nights (FC2 National Fiction Competition Winner, 1994), translated as Sur Les Nerfs (“On the Edge”), appeared in French in January 2012. It was nominated for the 2013 Prix SNCF du Polar. The second, Criminels Ordinaires (Fayard), was published in February 2013. Fondation is a recipient of a Christopher Isherwood Fellowship in Fiction Writing.

AUTHOR COMMENTS: I am indeed a very urban person. I don’t go camping or anything like that. I am most comfortable on concrete and asphalt. So I think urban life has had the largest impact on both what I write about, clearly, and on my style. But I do read a great deal. Just walking into a good bookstore is sexy to me.

So I have a long list of “influences,” from Cervantes, Hawthorne and Crane to Beckett, Borges, and Max Frisch. All aspirational, of course — all these writers are way out of my league!

But I remember my first reading of Hubert Selby’s Last Exit to Brooklyn. It blew my mind. First of all, I grew up very blue collar. “Writer” was not on my list of possible vocations. Vocational schools were the sites of sheet metal shop and auto body repair practice. (A college scholarship did help me get away from those kinds of professions, which I respect, but at which I suck.) Then I read Selby. It was stunning to me that someone could write about the streets like that and in prose like that. Stylistically, I am not much like Selby but the whole subject matter and torrid prose! Wow! And, Samuel Beckett — all the “closed space” novels. So brief and beautiful and haunting.

Finally, in addition to the “very literary” stuff, I also have read a lot of Donald Goines and Iceberg Slim and all.

Urban life seems to me to be marked by a multitude of occurrences, of discontinuous incidents and syncopated rhythms. Traditional narrative arc works well for certain kinds of portrayals. But not necessarily for the jumble of urban living, especially living on or close to the streets. Indeed there a lot of unintended consequences in contemporary life on both large and small scales. I try to approximate the discontinuity with short, stark vignettes that I hope, when taken together, add up to more than the sum of their parts.

I am also highly influenced by the visual arts. The photographer Henri Cartier-Bresson talked about capturing life at “the decisive moment.” The idea is to evoke a broader, more complete story at a given moment in time. Of course, this leaves much to — in this case — the viewer’s imagination. If you look at Van Gogh’s “The Potato Eaters” (1885), you see poor people eating a frugal meal. You can infer a whole story just looking at that one image. Van Gogh even talked about how the painting smelled“ not like paint, but “of bacon, smoke and potato steam.” You can ponder the barkeep’s entire life while looking at Manet’s “A Bar at the Folies-Bergere” (1881). Even abstract painting goes for a sort of evocation. I think it would be great to be able to achieve that sort of suggestion and simultaneity in writing. I am not saying I can do that, but I am striving for it.

Now, in the internet era, the momentary is even more prevalent. One can Google shark fin soup one minute and Talleyrand the next… that’s life as it’s lived now. Formally, my fictional project is largely one of compression.

SAMPLE CHAPTER: Larry Fondation’s books can be found on Amazon or at the Raw Dog Screaming Press website — http://rawdogscreaming.com/authors/larry-fondation/

WHERE ELSE TO BUY IT: Amazon, Barnes & Noble, etc.