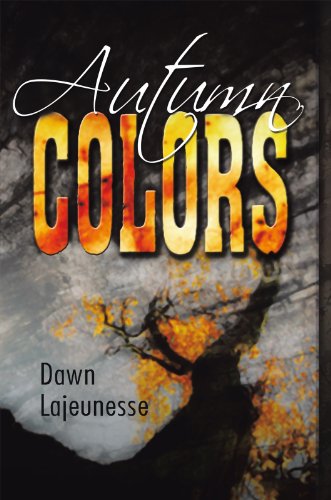 SUMMARY:  Kerry Waite is a 49-year-old freelance copywriter. Married 20 years to Charles, a research scientist, she’s reasonably content with her life, except for recurrent black periods, mostly in the autumn, when all she can focus on is how different her life would have been with Tom. Tom died in a car crash nearly thirty years ago that also claimed the life of her unborn baby and any chance for future children.

A letter from Tom’s sister informs her that Tom’s mother has died, and a memorial service is planned. Kerry has had no contact with Mrs. Crandall for many years, but the finality of the woman’s death opens old wounds and thrusts her into the past. Through the story’s transitions from present to past, she recalls her relationship with Tom as it struggled and grew into a deep love, only to lose him when they were about to be married. At Tom’s funeral, she watched the faded colors of the falling leaves, trying to focus on anything but the flower-draped casket about to be lowered into the ground.

Kerry chooses to go to the memorial alone, leaving behind a hurt and angry Charles. By the end of Mrs. Crandall’s memorial service, she is embarrassed by the intensity of her sobbing. She realizes her tears are not so much for Mrs. Crandall as they are her unwept tears for Tom. After the ceremony at the gravesite, where Tom also is buried, Kerry stays behind as the others drive off. It’s time to have closure with the past. She bids an emotional final goodbye to Tom.

Driving home to Vermont, Kerry senses a new lightness of spirit. For twenty years, her memories of Tom have blinded her to the fullness of her love for Charles. The image in her mind now is of Charles, not Tom. It is Charles who has been her love and support through good times and bad for 20 years, Charles who wasn’t threatened by her need to be independent, even when she was sometimes distant.

But the house is eerily quiet when she arrives home. A note from Charles tells her he’s gone to visit his friend Andy in NYC and to rethink their relationship. He’s tired of being cut out of her life. When Kerry calls Andy’s apartment, Charles refuses to talk to her. Has she repeated the same pattern of aloofness with her husband that had marred her relationship with Tom for so long? Will she now lose Charles at the moment when she finally recognizes the depth of her love for him?

During several days with more tears than she knew she had in her, Kerry relives her years with Charles with growing understanding of how she hurt him by her distance. Determined to make up for lost time, she drives to NYC to beg Charles to forgive her. When he finally agrees to see her, he says he loves her, but won’t continue to compete with a dead man.

She tells him about her realization after the memorial service, pleading with him to give her a chance to show him how much love has been locked away inside her.

Warily, he agrees to go home with her and they begin to heal. The story ends a year later, reflecting the companionable relationship they’ve always had, with the added depth of mutual love.

THE BACK STORY: New writers are told to “write what you know.” Autumn Colors is a fictionalized version of a personal struggle with letting go of a lost love and learning to cherish, unequivocally, the man I married.

WHY THIS TITLE: The memories drawn from to form the story took place in autumn.

WHY SOMEONE WOULD WANT TO READ IT: Nearly everyone has one or more losses that impacted their lives in a powerful way. It’s the kind of novel that lets the reader immerse herself (or himself) in the emotions attached to those losses. As one reviewer said: “This talented author knows how to evoke emotion, so much so that delving into her work hurts….Autumn Colors is an enlightening, though often aching, reflection on young love brought to a catastrophic end and a poignant description of spiritual healing. Expect more from this gifted writer.”

…The author does an excellent job of steering us through the emotional highs and lows of Kerry’s life and leaves us grateful she finally realizes happiness was in front of her nose all the time… Rated: Four Hearts (out of Five). — Bob Spear, Publisher & Chief Reviewer Heartland Review.

“Autumn Colors is competently written and … scenes and characters both ring true and have the vitality of invention. It will be interesting to see what the author does next. Rated: “Very Good!” —Bookreviews.com

“AUTUMN COLORS is a marvelous time machine of a novel that moves elegantly back and forth from one decade to another, vividly evoking past and present – people and places – reminding us ultimately that although the past is always with us, it doesn’t have to rule us.” —Mark Spencer, author of LOVE AND RERUNS IN ADAMS COUNTY and THE WEARY MOTEL

“Dawn Lajeunesse’s first novel AUTUMN COLORS is a tender, engaging read that surely will hold the heart of anyone who has lost someone to death who they intimately love. This story of letting go to love again makes this novel one of those that you just won’t want to put down.”  —-Gloria Waldron Hukle, author of MANHATTAN: SEEDS OF THE BIG APPLE, THE DIARY OF A NORTHERN MOON and THREADS – AN AMERICAN TAPESTRY.

” . . well-written story that will touch the emotions of the reader.” — Terri Valentine, author of STORM DANCER

“Dawn Lajeunesse is a fine writer whose characters capture the reader’s interest right from the start of the novel.” — Daniel Hayes, author of THE TROUBLE WITH LEMONS and MY KIND OF CRAZY; awarded two ALA Best Books for Young Adults commendations.

AUTHOR PROFILE:  Dawn Lajeunesse grew up in Troy, NY, the daughter of an Armenian “meat and grocery” man and a stay-at-home mom. She went to public schools and hoped to turn her love of English into a writing career. But her guidance counselor and parents pushed her in what they thought was a more practical direction, nursing or teaching. She chose nursing, since she liked biology.

“I never made it through surgery without passing out,” she says. “Great career planning, huh?”

After years in the health care field, she finally pursued her writing passion. She published her first novel, Autumn Colors, followed a few years later by In Her Mother’s Shoes and in 2016 released Star Catching. “I enjoy creating stories from ordinary lives, about relationships, families, friendships and other life connections.” Her new novel, The Eyes Have It (currently in search of a publisher) is a young adult, coming-of-age romantic fiction—a twenty-first century Romeo and Juliet meets Splendor in the Grass. Her senior year of high school, Liv finds love for the first time. Then a terrorist attack strikes at the heart of America and at the heart of her romance.

Married to Dennis for over half her lifetime, she feels fortunate to have found a man who is a great friend and playmate, in addition to the usual husbandly roles. He also cooks and does the grocery shopping! They lead active lives, frequenting the gym, biking, running, canoeing and cross-country skiing. She is an avid animal lover, and says, “I doubt I’ll ever write a novel that doesn’t include them.”

The Eyes Have It features a sweet Border Terrier based on my Border Terrier, Nala. Currently, she adds, “I lavish love and attention and loads of energy on my Russell Terrier, Dubby, who likely will appear in a future story.”

LOCAL OUTLETS: Available on Amazon and B&N as paperback, or for Kindle and Nook; also can be ordered through any bookstore if not in stock.

PRICE: Dependent upon source and format.

One thought on “Autumn Colors”