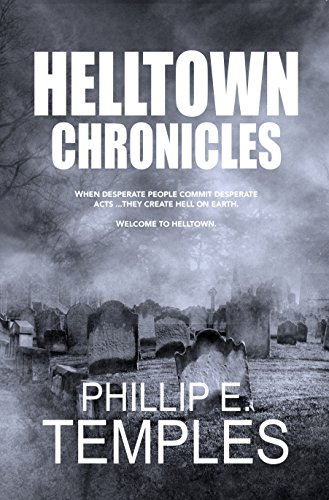 SUMMARY: Newspaper reporters Jerry Wolanski, from Cambridge, Massachusetts, and Susan Wong, of Toronto, Ontario, are both sent to Akron, Ohio by their respective editors, tasked with writing “fluff” Halloween pieces about Helltown. They happen to meet under bizarre circumstances in a cemetery, and decide to join forces. Soon they find themselves experiencing first-hand Helltown’s reputation for horror, intrigue, and the supernatural.

Along the way, Jerry and Susan meet up with a pair up of unlikely allies: Astarte, a New Age bookstore proprietor who practices witchcraft, and her ex-husband, Frank, a retired police detective turned private eye. With Astarte and Frank’s assistance, the reporters chronicle Helltown’s sagas and–in the process–must destroy a malevolent force that they’ve unwittingly unleashed before it destroys them.

THE BACK STORY: Fact: In the 1970s, the town of Boston Mills, Ohio was turned into a ghost town practically overnight when the U.S. Department of Interior seized lands and condemned homes and properties in order to expand the Cuyahoga Valley National Park. In the years since, a multitude of mysterious tales and ghost stories have sprung forth concerning the macabre remains, known to the locals as “Helltown.”

WHY THIS TITLE: While the novel contains many of the actual “fakelore” stories about the true-life ghost town, Boston Mills, Ohio (a.k.a. Helltown), I’ve woven them into my fictional plot with my protagonists. Hence the title, Helltown Chronicles.

WHY SOMEONE WOULD WANT TO READ IT: It’s a good, scary read. It’s fast-paced, and features a young protagonist, Jerry, who has a steamy relationship with an older “Mrs. Robinson” lover, Astarte.

Fans of the macabre are sure to relish Phil Temples’ darkly exquisite Helltown Chronicles, where investigative mystery and weird wonderment merge. There’s something for every horror fan here, in a decades-hopping stretch that includes a mad mortician, an eerie inn, mutant terrors and occult occurrences that would make Lovecraft cringe. Temples’ crisp, no-nonsense style grips one by the throat and keeps one yearning for more, with characters both disturbing and identifiable. Helltown is the sort of unconventional place that demands exploration. ––Michael Housel, Flask of Eyes

Phillip Temples’ Helltown Chronicles offers a page-turning tale of horror and the occult. The author combines what has come to be called “fakelore” from the real-life ghost town of Boston Mills, Ohio, with his unique brand of storytelling. The plot is centered among two young protagonists, Jerry and Susan, who are aided in their adventures by Astarte—a new age witchcraft practicing bookstore proprietor—and Frank—an ex-cop-turned-detective. Together, the four must confront a malevolant force before it destroys them. This is another fine piece of entertainment from the vivid imagination of an ace raconteur. ––Michael C. Keith, Slow Transit and Perspective Drifts Like a Log on a River

Phil Temples began writing flash fiction and short stories in the 1990s for his own amusement. He’s had over 140 titles appear online and in print. His first novel, The Winship Affair, was published in 2014 by Blue Mustang Press.  In 2017, Big Table Publishing Company accepted two additional works for publication: a short story anthology, Machine Feelings, and the paranormal horror-mystery, Helltown Chronicles.  Phil’s first novella, Albey Damned, was published by Wapshott Press in late 2017.  The second in the Carrie Bloomfield Novel series, The Allston Variant,  debuted in April, 2019 from Moonshine Cove Publishing. Moonshine Cove will produce his third Carrie Bloomfield installment, Uncontacted Frontier, in April, 2020.

In addition to his day job and writing activities, Phil is a ham radio aficionado, and a singer in a garage band.

WHERE ELSE TO BUY IT: Amazon.com, Barnes & Noble.

One thought on “Helltown Chronicles”