This week’s other featured books, “Earth Joy Writing,” by Cassie Premo Steele and “Immortal Soft Spoken,” by Robert Vivian, can be found by scrolling down below this post, or by clicking the author’s name on our Authors page. 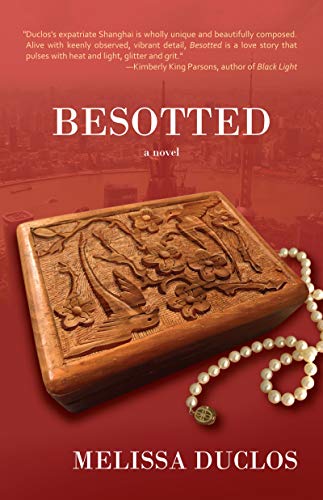 THE PUBLISHER: 7.13 Books. Run by authors for authors, 7.13 Books is committed to making beautiful works of literary fiction and offering a publishing experience that’s respectful to and even reverent of first-time authors.

SUMMARY: Besotted is the ballad of Sasha and Liz, American expats in Shanghai. Both have moved abroad to escape—Sasha from her father’s disapproval, Liz from the predictability of her hometown. When they move in together, Sasha falls in love, but the sudden attention from a charming architect threatens the relationship. Meanwhile, Liz struggles to be both a good girlfriend to Sasha and a good friend to Sam, her Shanghainese language partner who needs more from her than grammar lessons.

THE BACK STORY: I briefly lived in Shanghai in 2004 and started writing the book soon after I returned back to the states. Over the course of 10 years, I lost count of how many times I wrote and rewrote the book, submitted to literary agents, collected feedback, revised, submitted again. In 2015 I decided I couldn’t revise any more, and I accepted the book would never be published and moved on to other projects. In 2017, at the urging of a friend, I sent the book out to small presses, something I hadn’t done in my previous rounds of submission. I no longer had much faith in the story at that point, but my friend was very encouraging and I decided I had nothing to lose. Two months later the book was accepted by 7.13 Books. It was finally published 15 years after I first started work on it.

WHY THIS TITLE?: My characters struggle to know their own minds. I liked the idea of Besotted as a title because the word means both drunk and in love. Beyond being a literally accurate way to describe many of my characters, I like the sense of confusion that both meanings of the word convey.

WHY WOULD SOMEONE WANT TO READ IT? Besotted would appeal to anyone who’s had their heart broken and wants to know why. It’s for readers who are interested in characters who don’t yet know who they are, and who look to the people around them to help figure it out. The book brings the reader into the heart of ex-pat life in Shanghai, so it’s also great for readers who want an insider glimpse at an ever-changing city.

REVIEW COMMENTS: “Besotted is an absorbing, nuanced debut about belonging, desire, and the frustrations that surface in an atmosphere of isolation. Set mostly in tiny apartments, ridiculous happy hour bars, and Starbucks—all Western attempts to recreate home—Duclos’s expatriate Shanghai is wholly unique and beautifully composed. Alive with keenly observed, vibrant detail, Besotted is a love story that pulses with heat and light, glitter and grit.” –Kimberly King Parsons, author of Black Light

“In what could have been a staid romantic dwindle across nearly three hundred pages, Duclos employs a few narrative tricks to make this anything but a rudimentary star-crossed romance. While telling the story from Sasha’s first-person perspective, chapters sometimes shift into taking on the perspective of Liz, Sasha’s girlfriend, or Dorian, a mutual friend who flows into and out of the story like a bothersome tide. Her usage of this flawed narrator to take on what amounts to a first-person omniscient narration is bold and makes the reconstruction of their failing relationship all the more heart-rending as the reader is left not knowing how much to believe when Sasha narrates from Dorian’s or Liz’s perspectives. Duclos also uses emotions as pseudo-characters, deftly weaving Love, Anxiety, and Loneliness into Sasha’s telling of the story to build out what might otherwise have become an isolating experience for the reader.” –from a review in After the Pause

“An exquisite tale of desire, longing, love, and reinvention. Duclos’s brilliance lies in her painstaking renderings of heartaches large and small, and the particular pain of struggling to find connection on the other side of the world. Besotted is a head rush—a sexier smarter, more genuine coming-of-age story you will not find.” –Mo Daviau, author of Every Anxious Wave

AUTHOR PROFILE: I’m a novelist and essayist, an East Coast transplant who’s been living in Portland, Oregon for the past ten years, and a single mother of two. I’m deeply committed to building and sustaining literary community. I’m the founder of Magnify: Small Presses, Bigger, a monthly newsletter that highlights independent presses; and the co-founder of Amplify: Marginalized Voices, Louder, a series of workshops and retreats designed to give women and non-binary writers the confidence they need to publish and promote their work. I’ve also a long-time volunteer for Write Around Portland, an organization that delivers free writing workshops in a variety of social service settings. I’m currently at work on a collection of essay about heartbreak and writing.

AUTHOR COMMENTS: I wanted in this book to explore heartbreak in a new way. I had to adopt a somewhat unusual narrative perspective to do it: an omniscient first-person narrator. The story is told entirely from Sasha’s point of view, but she doesn’t really know all the details. What she doesn’t know, she guesses at, imagining scenes unfolding between Liz, Dorian, and Sam that she never witnessed. I adopted this narrator intentionally because I thought it was the best way to capture what heart break really feels like. When a relationship ends and we don’t know why, we all turn into Sasha, wading into a past we don’t entirely know to solve a mystery. It was a risk to use this perspective, but I think it paid off.

WHERE ELSE TO BUY IT: IndieBound, Amazon.