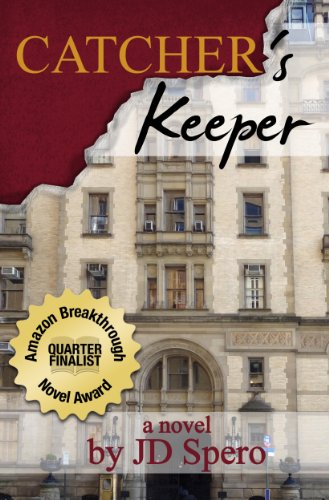 SUMMARY: It’s 1979 and Holden Caulfield, at nearly forty, has yet to heal from his childhood trauma. When his older brother stumbles upon Holden’s teenage “journal,” he believes it will save his struggling writing career. That journal becomes “The Catcher in the Rye” — published secretly under the brother’s name. A stinging sibling rivalry ensues. When Holden fights to win back his authorship, he stumbles into his number one fan: Mark David Chapman. When Holden learns of Chapman’s sinister plans, can he stop the tragic killing of John Lennon?

THE BACK STORY: In 1980 John Lennon was killed by Mark David Chapman, who believed he was Holden Caulfield, narrator of the classic “The Catcher in the Rye.” After the shooting, Chapman remained on the scene calmly reading the book, which he later offered to police as his statement. Years ago as a student teacher at Andover High School, my mentor handed me a VHS tape of an old Dateline video which featured this bizarre story. Every  year I taught Catcher, I would play that video for my class–and found myself equal parts enthralled and horrified with the tragedy again and again. When I stopped teaching after my third child was born, the story for “Catcher’s Keeper” came to me and I wrote the first draft in just three months. The book asks the question, “What if Holden could have met Chapman, learned of his plan, and tried to prevent the assassination?”

WHY THIS TITLE:  It’s a play on “Finders Keepers” as it brings up the question of authorship vs. ownership in the publishing world.

WHY SOMEONE WOULD WANT TO READ IT: Many people have strong feelings about The Catcher in the Rye. Love it or hate it, Catcher’s Keeper could be seen as nostalgia or sweet vindication for readers. Also, fans of John Lennon will be interested to see if his fate changes.

“JD Spero’s thought-provoking novel spins an alternate reality where The Catcher in the Rye is published two decades later, and puts its publicity tour on a collision course with the murder of John Lennon. Through the distinct voices of Holden, his brother and his sister, Catcher’s Keeper keeps us guessing whether they can change history, right up to its unexpected conclusion. A great debut novel.” — Steve Alcorn, Theme Park Designer and Writing Instructor.

“My excitement at finally seeing what would have happened to Holden came home with the publication of Catcher’s Keeper by JD Spero. From the beginning to the end the characters make one comfortably uncomfortable. The MD character was as disturbing as one would have expected and the integration of the three siblings Jerry, Alden, and Fiona make the journey as one would hope; intense, loving, and deeply moving. The novel is one I will be using in my classroom this year and for years to come because of its intensity, compassion, and commitment to truth, innocence, AND reality. An amazing piece of work by JD Spero. Thank you for letting your creativity flow while connecting to the iconic character Holden Caulfield.”
– Steve Malenfant, English teacher, Newburyport High School, MA (Retired)

AUTHOR PROFILE: Johannah Davies (JD) Spero’s writing career took off when her first release, Catcher’s Keeper, was a finalist in the Amazon Breakthrough Novel Award in 2013. Since then, she’s found similar success with her young adult fantasy Forte series, winning recognition from National Indie Excellence Award (2014, 2016), Adirondack Literary Award (2015), and Book Excellence Award (2016). Having lived in various cities from St. Petersburg (Russia) to Boston, she’s now settled with her husband and three sons in the Adirondack Mountains, where she was born and raised.

AUTHOR COMMENTS: I guess we all have a soft spot for our first born, yes? Though it’s been five years and I’ve recently published my 4th novel, I will always have passion for this story. I’ve been invited to countless book clubs and schools to discuss this book, and I do believe it’s timeless. The hardest part of writing it was portraying a true-to-life Mark David Chapman. I’m thrilled to be starting work on the audio version of the book!

Not even a week since I moved in with my brother and he’s testing my pacifist nature, butting in on my shit.

The aroma of coffee leads me like Pepé Le Pew to Penelope—right to Jerry. He’s at the kitchen table, all showered and dressed in Polo, going through my file box like he’s researching at the goddam library. He could at least pretend he’s helping me unpack. He’s into my old black binder from school. The thing must be decades old. Why can’t he wait until I’m out of the house to go through my shit like a normal nosy brother? It’s a Catch-22, though, because if I tell him to stop, he’ll know I’m buggin’ out. Can’t give him that.

Besides, he’s allowing my forty-year-old ass to crash here and I have yet to ask my big favor. So I should probably let this slide.

The coffee maker just made its final, steamy percolation. Pavlov’s so right.

I like my coffee black. Jerry has a hodgepodge collection of mugs. Surprising since he’d been married so long. You’d think he’d have matching china and whatnot. But no, I pour my joe into a YMCA mug and check out his lame view. What I’d call “low LA.” Parking lot. Smoke-stacks. Bird shit. Litter. The view is so pitiful I almost forgive Jerry for snooping. But then he reads aloud from my black binder, which is still in his hands:

“Now he’s out in Hollywood being a prostitute. If there’s one thing I hate, it’s the movies. Don’t even mention them to me.”

It’s familiar, but far away. There’s this tingling behind my eyes—like that time the fuzz found a doobie in my shirt pocket. I’m caught. Ol’ YMCA feels heavy as I take my first sip. It’s hot and tangy and gets my stomach ready. But I can’t find my smokes anywhere.

It’s quiet but for pages turning. Maybe it’s the coffee, but I start to sweat.

“You seen my cigarettes?”

Jerry just keeps reading. He’s all hunched over, rubbing his bald spot. It comes to me all at once, what he’s reading: my journal from when I was sixteen. That thing I wrote for the doc at the funny farm. Watching him read that is like having an itch out of reach.

My next sip of coffee is rushed and traces my esophagus with a nice burn. I would kill for a cigarette. I finally find my box of Marlboros behind the toaster. And it’s empty.

“Don’t you have any goddam smokes?”

Jerry takes his time answering, his eyes never leaving my binder. “Told you, I quit years ago.”

“Doesn’t Janine have some? I mean, did she? Maybe you stashed them away somewhere?”

That sure makes him look up. He glares at me. I feel bad, but it’s the nicotine talking. When he opens his mouth, though, what he says is, “This is good, Alden. All this about Spencer and the Atlantic Monthly and the ducks. You’ve captured something here.”

For real? This is my journal he’s talking about. I’d rather him wear my goddam briefs than read that thing. Word. I gotta get some air, let myself out into the sunshine. It’s like I’m taking up too much space in his pad. Him reading that thing is spreading the cells of my body all around the goddam room, my whole self pinging around, getting bruised, defenseless. Man, this place is gloomy as hell. The lame view is not half of it.

I drain ol’ YMCA. Let him read it if he wants to. I’m going out to buy smokes. Maybe some eggs too. In the spare room, I pull on cutoffs and my favorite Dylan t-shirt with a tomato stain on ol’ Dylan’s face. Where the hell are my kicks? You’d think they’d jump out at you since Jerry’s place is small compared to that stellar crib he had with Janine. Beyond small. Claustrophobic now that I have to wade through the cells of my own body to find my goddam shoes. Not the most Zen feeling in the world.

My Adidas finally appear under the coffee table. I’m putting them on my bare feet when Jerry says, “I knew you had balls, Alden. But not this big.” He laughs, a snicker, as if he’s uncovered my stash of Playboys. “Not this big.”

The last ounce drains out of me. I have to glance over to make sure he’s really not looking at my Playboys. No, still my goddam journal. So my options are this: I either have to rip it from his hands and confront him about it, or get the hell out of Dodge.

I’m a pacifist. And I still need that favor. So I’m out.

One thought on “Catcher’s Keeper”