SUMMARY:  Developing Minds: An American Ghost Story follows a group of recent college graduates who struggle with alienation and addiction as they try to survive a year of teaching at dysfunctional Miami public schools. 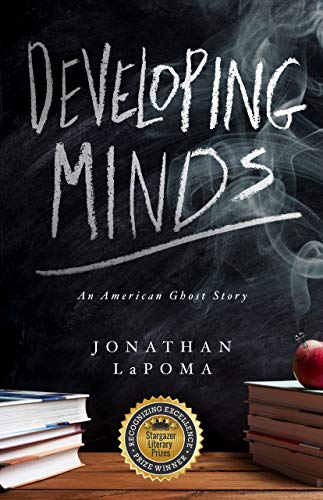 A poetic and insightful coming-of-age novel, Developing Minds is centered on 24-year-old Luke Entelechy, an aspiring writer who sees his creative output suffer when he begins teaching at one of Miami’s most challenging middle schools. As the year progresses, however, Luke begins to relate to the neglect and abuse his students suffer, and is faced with a “haunting” decision: continue to let his dark past destroy him, or rise above the struggle to realize his potential as an artist and a “real” human being.

Equal parts disturbing and humorous, Developing Minds offers a brutally honest look at the American public school system and the extreme measures many teachers take to cope with working in it.

*Developing Minds: An American Ghost Story is the fourth book in a loosely-linked series, with Hammond, The Summer of Crud, and Understanding the Alacrán as books one-three, and The Soul City Salvation as book five. Each novel can be read independently of the others.

THE BACK STORY: After writing my first novel, Understanding the Alacran, which is loosely based on the five months I spent living in Mexico after graduating from college in 2006, I had no intention of writing another novel. But after speaking with a friend about the year we spent teaching in Miami, I realized I had another story inside of me.

I experienced so many profound changes that year, many of which were inspired by my experiences working in an at-risk middle school, so I wanted to share those with others.

I’d written two screenplays between writing Understanding the Alacran and Developing Minds, so I had experience writing tight action lines and dialogue, which helped me to write a much faster-paced and humorous story.

WHY THIS TITLE: Developing Minds is more about a young man who is trying to overcome his inner demons than it is about a teacher learning how to become a better teacher. In fact, he desperately wants to get away from teaching and is only doing it until he can make it as a writer/actor, but through his experiences working in this at-risk school, he realizes that he has considerable work to do to improve his mental health before he can reach his potential as an artist.

This is by no means a stereotypical, and offensive, White-teacher-saving-the-Black-kids story. It’s really more about a group of young people who are doing their best to survive their inner demons, and at times they’re great teachers, and at other times, they’re awful.

WHY SOMEONE WOULD WANT TO READ IT: It’s raw and real. I didn’t sugarcoat anything, and you’ll see this if you read the reviews. I think many people expected a White guy saves the children thing, but this story is as much about the private lives of the teachers as it is about their day jobs. The novel is filled with cocaine, parties, orgies, fights…There are plenty of examples of child abuse and racism and teachers behaving terribly. A few readers mentioned that I had vastly exaggerated the story’s events, but if anything, I downplayed some of them. I experienced so many things during that year in Miami that I felt were too extreme for even such an extreme novel, so I left them out. Basically, with this novel, I wanted to rip out a slice of life and put it on the page without qualifying anything or rounding the edges (even though I did leave some parts out). There aren’t any heroes or villains in this story—just troubled people doing their best to survive in a hostile world—so if you need a cute, Hollywood-type of story with “likable” characters, I’d suggest you keep looking.

“Inspired by his own travels, screenwriter and author LaPoma’s narrative is raw and edgy, effectively anchored by two protagonists whose brio and “same sense of adventure” keep the story alive . . . Entertaining and authentic look at the troubled American educational system, courtesy of two men propelled by perseverance and adventuresome spirits.” — Kirkus Reviews, Recommended Review

“Should be required reading for anyone who is considering or has ever considered teaching as a career . . . most highly recommended.” –– Jack Magnus, Readers’ Favorite

“Not a read for prudes, but for those with an open heart, mind and admiration of satire. Jonathan LaPoma has adeptly captured the darker sides of teaching in Miami public schools and also experiencing the high (in all senses of that word) life in local bars and beaches. His raw, honest and rhythmic voice kept me going to the very end. I taught in inner city schools for over twenty years and I’m sorry to say that I know many of the stories he tells are not entirely fiction.” — Jill G. Hall, author of The Black Velvet Coat and The Silver Shoes

“Incredibly artistic . . . The vast majority of college grads will relate with themes of alienation, addiction, and misguided hopes . . . Filled with drama and drugs, this novel is raw and endearing. It teeters on the edge of obscene, but really stays true to the life of an early 20-year old, amidst the drama and guise of self-discovery. Instead of idealizing public schools or idolizing functional drug addicts, it just lays out the truth.” — San Francisco Book Review

“Not for the faint of heart, Developing Minds will either have you furiously flipping the pages or fearfully enrolling your kids in home school.” — Will’s Weekend Wrap-Up, NoiseTrade

“Poignant, engaging . . . a frighteningly accurate depiction of inner-city schools . . . a full-bodied work of fiction that will ring true with both students and teachers and provide a point of hope in an industry that has become increasingly profit-minded and complex.” — Red City Review

“Developing Minds is a raunchy, yet captivating story of two best friends, one gay, one not, who decide to spend a year teaching in the dysfunctional Miami school district . . . Jonathan LaPoma is an extraordinary writer.” —Stargazer Literary Prizes (Winner: Visionary & Metaphysical Fiction)

“In many ways, the novel was spiritual, as well as coming-of-age . . . plenty of action and adventure, as well as some poignant soul searching . . . Anyone who enjoys realistic fiction, with a gritty edge will enjoy this novel. The characters are extremely well written and believable, and the dialogue is perfect. Despite the serious matter, the book is also very humorous, visual and vibrant to read.” — —Chantelle Atkins, Underground Book Reviews

“Sometimes the meat of a title lies not in fire and flames, but in simmering passion. Such is the nature of the coming-of-age experience depicted in Developing Minds, which offers a multi-faceted exploration of growth, maturity, and eventual transformation on the parts of all involved.” — D. Donovan, Senior Reviewer, Midwest Book Review

When I published the book; however, several readers expressed concerns about the drugs, sex, and rock n roll, so keep that in mind if it ain’t your thing.

AUTHOR PROFILE:  Jonathan LaPoma is an award-winning novelist, screenwriter, songwriter, and poet from Buffalo, NY. In 2005, he received a BA in history and a secondary education credential from the State University of New York at Geneseo, and he traveled extensively throughout the United States and Mexico after graduating. These experiences have become the inspiration for much of his writing, which often explores themes of alienation and misery as human constructions that can be overcome through self-understanding and the acceptance of suffering.

LaPoma has written five novels, fifteen screenplays, and hundreds of songs and poems. His screenplays have won over 160 awards/honors at various international screenwriting competitions, and his black comedy script Harm for the Holidays was optioned by Warren Zide along with Wexlfish Pictures (American Pie, Final Destination, The Big Hit) in July 2017.

LaPoma’s novels have been recommended by Kirkus Reviews and Barnes and Noble (B&N Press Presents list), have hit the #1 Amazon Bestseller lists in the “Satire,” “Urban Life,” “Metaphysical,” “Metaphysical & Visionary,” and “Religious & Inspirational” Kindle categories (USA, Canada, and Australia), and have won awards/honors in the 2018 Eric Hoffer Book Award, the 2016 and 2017 Florida Authors and Publishers Association President’s Awards, and the 2015 Stargazer Literary Prizes. He lives in Mexico City.

LOCAL OUTLETS: It’s available in several bookstores in San Diego, CA, but your best bet is to find it online: