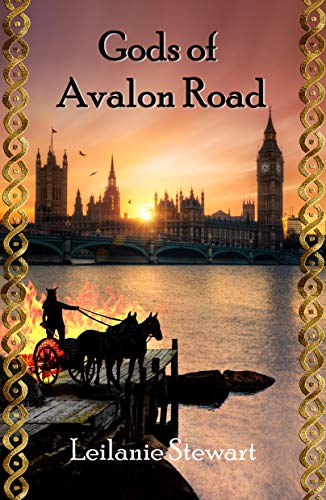 THE BOOK: Gods of Avalon Road

SUMMARY: (From the back cover) London, present day. Kerry and her university friend Gavin move to London to work for the enigmatic Oliver Doncaster. Their devious new employer lures them into an arcane occult ritual involving a Golden Horse idol.

Britannia, AD 47. Aithne is the Barbarian Queen of the Tameses tribes. The Golden Warrior King she loves is known as Belenus. But are the mutterings of the Druids true: is he really the Celtic Sun God himself?

Worlds collide as Oliver’s pagan ritual on Mayday summons gods from the Celtic Otherworld of Avalon. Kerry is forced to confront the supernatural deities and corrupt mortals trying to control her life and threatening her very existence.

THE BACK STORY: Gods of Avalon Road began life as a short story of around 6000 words. The plot centred on a woman who experienced mysterious events in her new flat; together with a friend, she began research to find out why, discovering how the previous occupiers had performed pagan rituals that had resurrected an ancient, immortal being. In the end, I left the short story version unfinished as it kept getting bigger and bigger. I decided I had enough ideas to make it into a novel, but needed a new focus. A few years later, I decided to lift the three main characters and plug them into a new idea that crystallised while I was on a long walk near the Thames by Wandsworth Bridge. Inspired by a few real locations, I decided to set the story in a fictional house in a real street and once the ball was rolling, the ideas began to connect into a comprehensible chapter plan, which I outlined and it took off from there.

WHY THIS TITLE: Since the story was inspired by a real location in London, Avalon Road, my first idea was to use that as the title. Later on reflection, I felt that calling it Avalon Road gave it more of a literary feel: I needed a title that would show readers my novel was an urban fantasy story. I decided to expand it to the title as published, Gods of Avalon Road, as this also gives a glimpse that the book has elements of Celtic mythology within.

WHY SOMEONE WOULD WANT TO READ IT: Fans of Celtic folklore would enjoy it, as the gods are taken straight from Celtic myths and legends: Belenus, Ceridwen, Morfan and Afagddu are all characters in my book who are also known in Welsh mythology and feature in some of the King Arthur legends. However, I’ve added a new twist by reimagining them in 21st century London and taking it a step further by throwing in some paranormal romance. Imagine if the ancient Celtic Sun God, Belenus, was not only real but in love with Kerry, your average girl next door. How would that work in modern day life?

REVIEW COMMENTS: This intriguing and unique plot mixes the fate of ancient Gods with modern paganism set on the banks of the River Thames in London. Well written and with strong, complex characters, this book will appeal to readers who love the themes of pagan ritual, myth and legend. (Lisa R, Amazon)

The Gods of Avalon Road is not one of my usual reads, but the idea of the story was intriguing to me. The writer appears to have done a great deal of research into the myth/beliefs used within the book and I found it all quite interesting. I enjoyed seeing the characters develop and their lives change throughout. The events kept my attention throughout. A great and interesting read. (Elisha B, Goodreads).

The Gods of Avalon Road by Leilanie Stewart is an interesting read. Kerry gets involved in an arcane ritual. She begins to have visions of a Golden Warrior. Kerry’s life begins to spin out of control as her world is threatened by pagan gods. It kept me on the edge of my seat throughout. Beautifully written. Entrancing. Hypnotic. You’ll truly enjoy this one. I give it five out of five stars. (A.R. Ford, author website and Facebook review page).

AUTHOR PROFILE: Leilanie Stewart is a writer and poet from Belfast, Northern Ireland. Gods of Avalon Road was her debut novel, published by Blossom Spring Publishing in 2019. She has also had two poetry collections published: A Model Archaeologist from London based Eyewear Publishing in 2015 and Chemotherapy for the Soul by Canadian publisher Fowlpox Press in 2017. Leilanie’s poems and short stories have appeared in magazines in the UK, US and worldwide. Her poetry was longlisted for the Melita Hume Poetry Prize 2014 in the UK and a selection of her poetry and fiction was chosen for the Best of the Web Storm Cycle Anthology 2013 published by Kind of a Hurricane Press in the US. More of Leilanie’s work is forthcoming: her third poetry collection, The Redundancy of Tautology is coming soon from Cyberwit and her second novel, literary fiction set in Japan, is under consideration by a US publisher.

AUTHOR COMMENTS: You can listen to an excerpt on Leilanie Stewart’s YouTube channel at: https://m.youtube.com/watch?v=iR9wTzBzaIM

SAMPLE CHAPTER: A sample can be downloaded from Amazon at: https://www.amazon.co.uk/gp/aw/d/B07ZDFBCML/

LOCAL OUTLETS: Available on Amazon, Barnes and Noble and the Book Depository worldwide and in Waterstones and Foyles in the UK.

WHERE ELSE TO BUY IT: Via the publisher’s website at: https://www.blossomspringpublishing.com/shop/gods-of-avalon-road/

Author signed copies are available at a discount price from: https://meandibooks.bigcartel.com/product/gods-of-avalon-road

One thought on “Gods of Avalon Road”