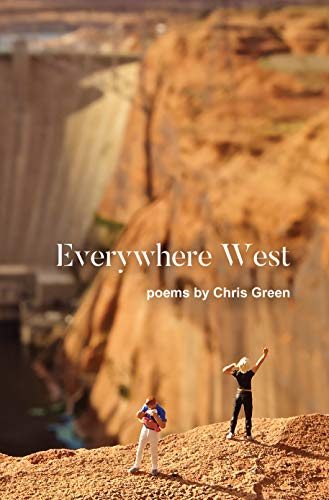 Mayapple Press is a small literary press founded in 1978 by poet and editor Judith Kerman. We celebrate literature that is both challenging and accessible: poetry that transcends the categories of “mainstream” and “avant-garde”; women’s writing; the Great Lakes/Northeastern culture; the recent immigrant experience; poetry in translation; science fiction poetry

SUMMARY: The poems in Chris Green’s Everywhere West stand in the light and dark of family life and are bowled over by the beauty of fatherhood. Like a novel, the poetry asks over and over, “What’s worth living for?” The book also explores living in America at a time when basic human value is being hacked and discontinued. The poetry stands and says I am happy and I am not happy. Nothing is simple about being a child and parent, and through complications of time and grief, the book is crowded with hope.

THE BACK STORY: I wrote this book because I want to remember the beautiful struggle of being a dad to daughters and of being a son in an extended family (and country) full of troubles.

WHY THIS TITLE: I stole the phrase “Everywhere West” from the side of a passing train car. I’m originally from Park City, Utah (the mining town, not yet the super-rich resort), and because many of my poems recall family and home, they in effect, go west. Also, the book contains many poems about America and its past and present direction—West is the direction of American expansion, the direction of Manifest Destiny, the essential direction of the vision quest. West, as it has always been, is the direction of seeking. The book’s title poem is also an 8-minute poem-film featured on my website: http://chrisgreenpoetry.com/

WHY SOMEONE WOULD WANT TO READ IT: It’s real-life, not-too-poety stuff about being a son/dad/husband…and about someone like you living in a country and world going politically and culturally crazy.

Poet and professor Green’s fourth collection of poems dives deep into intergenerational domesticities: the sacrifices and fraught relations of parents, the death of a grandfather, the innumerable epiphanies young daughters deliver in unexpected utterances and diary entries: “The baby dolphin was lost in the woods of the sea.” A book of small silences and quiet landings, Green’s elliptical lyrics trace the secret legacies of complicated figures: the speaker’s father, frustrated, struggles to study for law school with a houseful of family and animals; elsewhere, “the starved wooden friar / bent over a chessboard is my father’s affair, / which has lasted twenty years.” There’s a persistent longing, almost a nostalgia for the present: a simultaneous desire to occupy and escape the here and now. And Green’s verses often yield moments of striking brightness: “Bliss, not a balcony on a May evening, / but a golden dome lit from within.” A welcoming collection that will connect with readers as much for its familiar content as for Green’s ability to open intimate poetic moments outward to the world. — Diego Báez, Booklist, 2020

Chris Green is the author of four books of poetry: The Sky Over Walgreens, Epiphany School, Résumé, and Everywhere West (Mayapple Press, 2019). His poetry has appeared in such publications as Poetry, The New York Times, Court Green, and Prairie Schooner. He’s a founding editor of Big Shoulders Books whose mission is to disseminate, free of charge, quality works of writing by and about Chicagoans whose voices might not otherwise be shared. He’s edited four anthologies including I Remember: Chicago Veterans of War and American Gun: A Poem by 100 Chicagoans (Big Shoulders Books, 2020). He teaches in the English Department at DePaul University. More information can be found at http://www.chrisgreenpoetry.com.

Here’s my “unofficial” bio written by the poet cin salach:

Chris Green is an old soul with a new voice for these swirling days…he has a fondness for large animals, mainly tigers and deer.

He is quiet on the outside, but very loud on the inside. His poems never need a microphone to make a big sound.

His family surprises him by being exactly who he needs them to be. Female, fierce and funny. Of course, they are far more than this, and that’s why they are so hard for him to write poems about. Large animals are much easier. They stand still longer.

A seeker of peace over power, he could have been a musician, if he wasn’t such an extraordinary poet.

You are always drumming your small fingers

and refusing to blink.

When you are mad this is a popular act:

write my name on a piece of paper, cross it out,

and hand it to me.

Once you said, “Santa Claus is not looking for you.

God is not looking for you.”

I can even believe you exist to tease me

into writing about you.

You spend mornings looking out the window

for the cloud-white cat that patrols our yard each night,

in the same spot. The cat does his work

lays his report on our desk.

It is always a matter of life or death.

You are so serious about the predicament of nature.

You keep a field journal at five.

I ask if you write about the weather;

you look disbelieving as if I don’t know a single thing.

You say, “It’s for writing about animals

and their problems and when it’s foggy what’s blocking you.”

“The baby dolphin was lost in the woods of the sea.”

There is something to be said for knowing that a house

is not the world.

watching you, I find my seat at the desk.

Unseen I stare back as you recede.

WHERE TO BUY IT: Mayapplepress.com, Amazon.com.