This feature has a two-fold purpose: 1. To allow those recently added to our followers list to discover books they might have missed and 2. To make sure previously featured authors and their work aren’t forgotten. If you’d like to learn more about any of the books revisited here, simply click on the “Authors” page, then on that author’s name.

After years of medicated struggle, 34-year-old Zoe quits her office job and moves into a trailer with her boyfriend in rural Maine against her family’s wishes and her doctor’s advice. After all, she has big plans with Gordy, a goateed vegetarian with thoughtful eyes and a job at a yoga studio and, as it turns out, an unfortunate desire to always be in control. But when a late-night argument turns violent, Zoe runs away in search of a mystical beach house she recalls from childhood, only to discover that in order to find it, she must reckon with her past. In electric prose that burns with wit and intelligence, Miss Portland explores what it means to give up everything in order to recover who you are.

“SO LATE TO THE PARTY,” BY KATE ANGUS.

The poems in So Late to the Party, in different ways, all ask the same question: How can we best live in this beautiful terrible world that we are lucky enough to so briefly visit? There are poems about loneliness and desire, love and loss, longing and connection, cups of coffee and glasses of wine, wolves and tiny origami dragons, violins and shipwrecks, New York City’s East Village late at night and early mornings in Michigan, cassette tapes and theremins, and family and friends and lovers and pets who all make an appearance, wandering in and out of the poems.

It’s 2004 at the start of this tale of cultural dissonance, hubris, anger, loss, and resiliency, and Cooper, a talented video-game programmer, is about to join a missile-defense group on the island of Kwajalein, a military stronghold on which Marshallese are not allowed after dark. But he has a freak accident after sailing alone across the Pacific from California, following a rift with his fiancée, and begins his stay on Kwajalein in rehab after losing a leg. A bizarre diving mishap has left Alison widowed with two young sons. Jeton, an impulsive Marshallese teenager jilted by his American girlfriend, propels himself into deep trouble. And Art, the flinty cultural liaison, fights discrimination against the Marshellese. In this poisoned island paradise besieged by poverty, disease, and rising sea levels precipitated by global warming, each irresistibly self-embattled character makes grievous mistakes, suffers from regret, and plunges into disaster. Tanner (From Animal House to Our House, 2012), who lived in the Marshall Islands and launched the Marshall Islands Story Project, brings this microcosm of human folly and valor to captivating realization with bracing insights, tangy humor, profound respect, and rebounding resonance.

Writes Janet: “Clutching Lambs brings together poems that are driven by language itself, wrought against a hidden background of peril and loss. The poems are haunted by the vulnerable— women, children, the occasional man or wild animal. This is an emotional book. Architecture and the natural world frame the psychological content. There estrangement from religious faith, the sense that one will not be protected, a lesson I learned repeatedly and at too young an age. My background as a visual artist impacts this book via my use of imagery as well as my occasional use of ekphrasis as a starting point.”

“THE STING OF THE BEE,” BY KAREN LANNING. 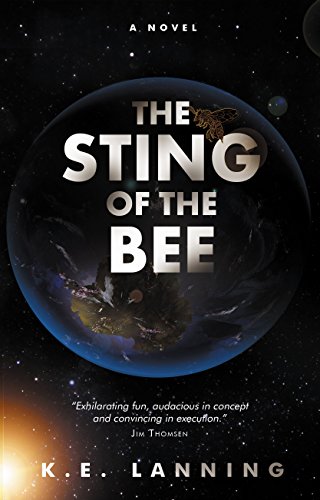 After the murder of his wife, John Barrous escapes from the corrupt country of the United States of Amerada, filled with haves and have-nots, to stake a claim on the rich, virgin land of Antarctica. Along with Lowry Walker, now returning to her home, John and his fifteen-year-old daughter join a United Nations PR event, an Oklahoma-style land rush. But the Rush turns into a race against ruthless, armed competitors . . . and a corrupt politician determined to control this new land. Within the epic of settling a new land, John and Lowry crisscross in this complex tale of love, destiny and betrayal.

n 1889, a massive late-night storm caused a tiny creek at the foot of the Blue Ridge Mountains to turn into a raging river. The rushing waters washed away an embankment where the railroad crossed the creek. Near the small village of Thaxton, Virginia, a passenger train plunged into the washout, and at least eighteen people perished in the wreck. The survivors remained stranded with no contact or help for hours in the rain, while those who did not make it out were consumed by a horrible fire that ripped through the wreckage. In the days that followed, most of the remains found were tossed into a common and now unmarked grave in the city of Roanoke. The wreck was forgotten even in the state of Virginia, where they had memorialized train wrecks that were much less devastating. The book focuses on the people on board the train and their stories before, during, and after the wreck.