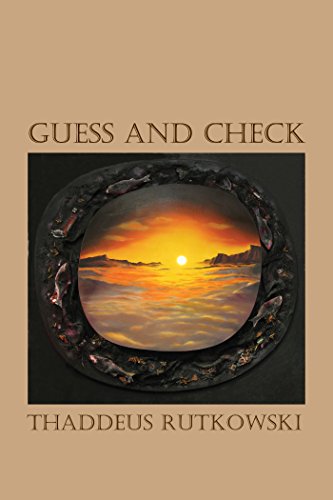 THE BOOK: Guess and Check

SUMMARY: Guess and Check is the story of a biracial boy—later a young man—who adjusts with difficulty to lessons learned from the behavior of his parents and the people around him. In his world (rural America), he is an observer of dysfunction. He doesn’t identify with either of his parents—his mother is Asian and his father is Caucasian—or most of the children he meets in school. At times he is bullied, at other times ignored, so he seeks a way out.

His outsider experience doesn’t improve during his college years or his life as a young man. As an employee for an unnamed company, he feels an anxiety that leads to surreal incidents—on the border between bad dreams and what actually happens.

Yet he eventually learns to get along with, even love, the people around him, though the feeling doesn’t come easily. Fortunately, his journey with his own family goes in a positive direction, and the story ends on a note of hope.

THE BACK STORY: Several years ago, Robert Giron of Gival Press asked me to contribute to his anthology, Poetic Voices Without Borders 2. Since then, I’ve been honored to judge two novel contests for the press. My collection of prose reminiscences is my first book with the press, though it is my fifth published book of prose.

WHY THIS TITLE: “Guess and check” is a phrase I learned from my daughter when she was in grade school. It refers to a way of solving math problems by guessing at the answer, then checking to see if the answer works in the equation. One of the chapters in the book is titled “Guess and Check”—it was first published in the journal Your Impossible Voice.

WHY SOMEONE WOULD WANT TO READ IT:  I had thought that my work would appeal to biracial people, or even uni-racial people, if those uni-racial people happened to be Asian. This has turned out to be somewhat true. I’ve had the opportunity to introduce my work in East and Southeast Asia, and to read with and work with a number of Asia-related writers. However, I’ve found that my writing is not always seen as culturally specific. It also appeals to people interested in literary writing—work that doesn’t belong to any genre and that takes liberties with form. I have a background in spoken word and slam poetry, and in the writing of flash fiction.

Every chapter presents a new vignette, each as tight and condensed as the best flash fiction. Terse, observational prose points out the bare facts of each new situation, above all else. And as each tale moves through new phases in the narrator’s life, there’s always more to discover. The characters are subtly drawn through small, thoughtfully rendered details—the father’s love of Mao and Lenin, the mother’s inability to get anyone to use the children’s Chinese names. These moments make even the shortest snippets stick in one’s mind, long after the pages have turned. A stark, engrossing, Hemingway-esque portrait of a life spent in the margins. — Kirkus Reviews, http://www.kirkusreviews.com/book-reviews/thaddeus-rutkowski/guess-and-check/

Although I daresay he didn’t originate this style, there is a form of writing where reality and dream are mixed in a special way, which has become associated with Murakami, but which has been given new twists by American authors, most notably in the way it has been given a novel direction and dynamic by Thaddeus Rutkowski in his new collection, Guess and Check. –Jim Feast, Sensitive Skin: https://sensitiveskinmagazine.com/thaddeus-rutkowski-guess-and-check-review-jim-feast/

AUTHOR PROFILE: Thaddeus Rutkowski is a graduate of Cornell University and The Johns Hopkins University. He is the author of five books of prose: Guess and Check, Violent Outbursts, Haywire, Tetched and Roughhouse. Haywire reached No. 1 on Small Press Distribution’s fiction best-seller list and won the Members’ Choice Award, given by the Asian American Writers’ Workshop. He received a 2012 fellowship in fiction writing from the New York Foundation for the Arts and served as a panelist for the 2017 NYFA fellowships in nonfiction. He teaches literature at Medgar Evers College and creative writing at Sarah Lawrence College and the Writer’s Voice of the West Side YMCA. His writing has appeared in The Outlaw Bible of American Poetry, The New York Times, The International Herald Tribune, CutBank, Hayden’s Ferry Review, Faultline, Fiction, Fiction International, Iron Horse Review, Pleaides, Potomac Review, Sou’wester and many other publications. He was selected to read in the former compound of East German President Erich Honecker in Berlin. He has been a featured reader in Budapest, Dublin, Hong Kong, London, Paris and Singapore, as well as in many U.S. cities.

My main character tells the story, and he speaks in a voice that’s not quite my own. I work to find a narrative voice that is thoughtful, provocative, humorous, unsettling. Often, the voice carries the story. Even if events don’t add up or follow in a continuous way, they are connected by the voice.

WHERE ELSE TO BUY IT: Amazon.com: https://opinionator.blogs.nytimes.com/2014/07/20/one-degree-of-separation/