THE BOOK: A Room in Dodge City.

PUBLISHED IN: 2017 (Winner of the 2016 Electric Book Award for a then-unpublished manuscript)

SUMMARY: This is a novel composed of short, linked vignettes detailing a nameless drifter’s descent into madness in a bizarre, darkly comic Dodge City of the mind. It takes place in a skewed version of contemporary America, one in which monsters come out of the woodwork and main characters die and are reborn many times, but it’s heavily informed both by the legacy of Westerns shot in Dodge City, and by Eastern European fantastical literature, like Bruno Schulz’s Street of Crocodiles and the stories of Isaac Bashevis Singer. 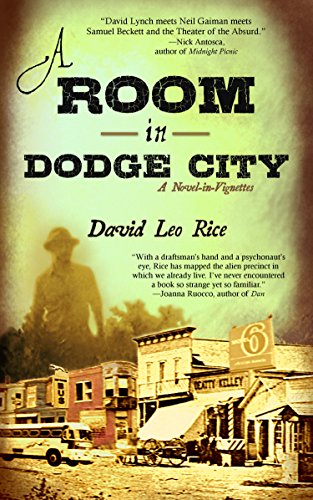 This book is the first of a trilogy, focusing on the drifter’s loss of what little identity he began with, and subsequent inability to leave Dodge City. Vol. 2, which comes out next year, focuses on his attempts to find work within the cultish and possibly supernatural Dodge City Film Industry.

THE BACK STORY: I started writing this book in 2011 as a series of short chapters when I needed a reprieve from ANGEL HOUSE (which ended up as my second published novel). That other book was immensely taxing and discouraging at times, so I began the Dodge City project as a way to do something lighter and more fun. I posted each vignette on a WordPress, and thus serialized the story over several years. When the first narrative arc was concluded, I put it all into a single document and re-edited it quite substantially into a standalone novel. My goal was to write in a way that I felt was natural and surprising — I figured that if I could surprise or scare myself, or make myself laugh, then others would enjoy it, as well.

WHY THIS TITLE?: The Dodge City part is pretty straightforward. As for the Room part, I liked how it conjured the image of this drifter holed up alone in a hotel room in an unfamiliar town, and also how it had a meta-element, insofar as the book, like most books, was written within a room. I like working with characters who don’t have a house to live in, but only a single room within the otherwise unfamiliar and often menacing environment of a strange town. That uneasy balance of private and public sparks my imagination.

WHY WOULD SOMEONE WANT TO READ IT? Many readers have told me that they’d never before read a book simultaneously so strange and so familiar. Dodge City takes place in a recognizably American town, but it infuses a lot from nightmares, folklore, horror movies, and even the looping, ambient structure of video-games into its descriptions of everyday life. I think especially now, when American culture is at a kind of crisis point, the book will resonate with anyone who feels that something in the weave of reality isn’t quite right — and who has both a sense of horror and a sense of humor about this feeling.

1. A very rewarding read! I opened it and found myself speeding through an avalanche of flashes of the pop-industry-infected delusion that’s the new American frontier. You come to the end with the feeling that some strange justice has been done to dizzying, enigmatic phantoms you had but half-realized to be dealing with every single day. Wholly recommended!

2.There’s much to compare ‘A Room in Dodge City’ to — and indeed, the collection of surreal vignettes are rich with literary allusion and pop culture mashup with bullheads quoting Beckett and the discordant appearance of veteran character actress Linda Hunt — but all comparisons kind of fall short.

Yes, it’s a little like David Cronenberg meets Buffalo Bill Cody. Or, Lewis Carroll as rewritten by Cormac McCarthy. And, in one section, which dives into the folkloric pre-history of the titular Dodge City, I got a whiff of Isaac Bashevis Singer’s shtetl stories (if they were run through a meat grinder and splattered on a canvas of bleached bone). But really, this is a work too singular and weird for any totally satisfying comparison. As we follow an unnamed narrator through a series of episodic hellscapes filled with nightmarish oddballs, a totally beguiling, unsettling image of a place called “Dodge City” emerges that is unlike anywhere you’ve ever been too, but also chillingly familiar.

For all the exquisitely rendered horror, it’s also a surprisingly funny trip. I laughed out loud every time I read the puny name Big Pharmakos— a Greek standup comedian. Dodge City provides this uproariously bleak and incongruous roadside attraction:

“A Dairy Queen whose parking lot marquee reads: ‘Another Day Too Sad For Words: $1.99”

For all its resounding and evocative thrills and chills, this novel is worth way more than the above mentioned DQ offering.

3. David Leo Rice’s A Room in Dodge City has the strange beauty of a Lynch film. Reading it is an experience, which I found inspiring in the best way. The quick prose, the bizarre imagery, the wit and pacing make this book a surreal treasure.

4.David Leo Rice works a dark magic here in Dodge, his talismans being perceptions of such detail and force that they seem to materialize from a background as dark as the pit. Unnerving and beautiful, hell itself could never be as captivating as the shabby hotel herein, where the whimpering on the other side of a door beckons, and you cannot help but lean into it, your ear to the board, and finally, to lift the latch and turn the knob.

NOTE: HERE IS A RECENT PODCAST IN WHICH DAVID IS DOING A READING FROM “A ROOM IN DODGE CITY.”

AUTHOR PROFILE: I’m a writer and animator from Northampton, MA, currently living in NYC. I studied medieval mysticism and modernist literature as an undergrad at Harvard, lived in Berlin for a year, and later did an MFA in fiction at The New School. I’m always interested in situating my work along the two axes of strangeness and sadness, by which I mean I aim to make work that’s surreal, bizarre, and nightmarish, but that also has a definite emotional pull and sincerity, perhaps even a note of sentimentality. If I’m doing my job well, the reader should be weirded out and profoundly moved in equal measure.

These two interviews will tell you a lot about me:

AUTHOR COMMENTS: I hope to elucidate the strangeness of being an individual in the early 21st century, and also to tie whatever is unique about that strangeness to more trans-historical and universal human themes. I believe that every era is unique, and yet within that uniqueness the same patterns and cycles play out, so art and literature are perhaps the best ways we have to explore what those patterns are, and how they manifest in our current lives.

SAMPLE CHAPTER: Here’s a link to a Dodge City excerpt:

And here’s my Goodreads page: