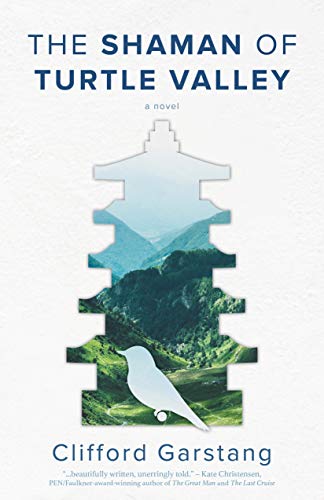 THE BOOK: The Shaman of Turtle Valley

SUMMARY: The Alexanders have farmed the land in Turtle Valley for generations, and their family and its history is tied to this mountainous region of Virginia in ways few others can claim. When Gulf War veteran Aiken Alexander brings home a young and pregnant South Korean bride, he hopes at long last to claim his own place in that complicated history—coming out from behind the shadow of his tragically killed older brother and taking up a new place in his father’s affections. However, things do not go according to plan. While he loves his young son, his wife, Soon-hee, can’t—or won’t—adjust to life in America. Her behavior grows stranger and stranger to Aiken’s eyes every day until the marriage reaches a breaking point. When Soon-hee disappears with their son, Aiken’s life and dreams truly fall apart—he loses his job, is compelled to return to the family home, and falls prey to all his worst impulses. It is at this low point that Aiken’s story becomes interwoven with a dubious Alexander family history, one that pitted brother against brother and now cousin against cousin, in a perfect storm of violence and dysfunction.

THE BACK STORY: In a sense, the novel is an extension of the rural stories I was telling in my first collection, In an Uncharted Country, which came out in 2009. Like those stories, the novel was inspired by small-town life and the history of the region, but it also has sources elsewhere–my experience living in Korea and learning the language and culture of that country, making a connection between the landscapes and customs of the two settings, and my interest in the forces and secrets that often drive families and communities apart. I wrote the book in a three-year period and then spent several years refining the manuscript and looking for a suitable publisher.

WHY THIS TITLE: The book had an early working title and then for a long time a title that I thought I was committed to until I finally hit upon this one fairly late in the process. For me, it raises a few questions that I hope readers will want answers for. Shamanism and folk customs play an important role in the story and, while it isn’t critical to the plot, the turtle is a significant symbol in Korean folklore, representing both wisdom and longevity.

WHY SOMEONE WOULD WANT TO READ IT: Readers will be surprised and pleased by the juxtaposition of Korean and Appalachian cultures and the parallels in the history and customs of the two regions. Beyond that, readers will be engaged in the story of the Alexander family, their history on the land, their dwindling fortunes, and the family secrets and conflicts (and accompanying ghosts) that haunt them.

In his excellent and deeply moving novel, The Shaman of Turtle Valley, Clifford Garstang has created a fine cast of characters, most notably the women surrounding his protagonist, Aiken. By inhabiting their voices and lives, showing their resilience and complexity, their precise, individual emotional terrains, he imbues the novel with a powerful undertow of empathy, alignment, and imaginative comprehension. This is a story about the many kinds of love beautifully written, unerringly told. –Kate Christensen, PEN/Faulkner-award winning author of The Great Man and The Last Cruise

When Aiken Alexander, a vet returning from Desert Storm, brings his young Korean shaman wife home with him to the Virginia mountains, he sets off a powerful cross-cultural collision. Garstang’s novel reads like a modern-day version of the Odyssey with a delicious twist: on his return to Ithaca, this Odysseus brings Circe with him. –David Payne, author of Barefoot to Avalon

With his first novel, The Shaman of Turtle Valley, Clifford Garstang has created a melding of two worlds he knows intimately, and he has done so with the outright surety of a master. Turtle Valley itself sits below the mountain ranges of Virginia, maybe, but the valleys at work in the hearts and minds of Mr. Garstang s characters owe as much to the history and culture of Korea, that far-off land from which the novel’s protagonist brings his teenage bride. By using a series of short but fluid sections, moving about the world with ease, Mr. Garstang has given us a novel with the feel of something universal and, indeed, epic. Once you start it you won’t be able to put it down. –Richard Wiley, author of Soldiers In Hiding, winner of the Pen/Faulkner Award for Best American Fiction

AUTHOR PROFILE: Clifford Garstang is the author of a novel, The Shaman of Turtle Valley (Braddock Avenue Books, 2019), a novel in stories, What the Zhang Boys Know (Press 53, 2012), which won the Library of Virginia Literary Award for Fiction, and a collection of short stories, In an Uncharted Country (Press 53, 2009). He is the co-founder and former editor of Prime Number Magazine and is also the editor of the anthology series, Everywhere Stories: Short Fiction from a Small Planet, Volumes I-III (Press 53). His fiction has appeared in numerous magazines, including The Hopkins Review, Bellevue Literary Review, Blackbird, Cream City Review, and Tampa Review, and his book reviews have appeared in Washington Independent Review of Books, New York Journal of Books, Rain Taxi, Virginia Quarterly Review, Shenandoah, and elsewhere. Many writers know him from his ranking of literary magazines, a service he provides on his website: https://cliffordgarstang.com. A former international lawyer, having worked throughout East Asia, he now lives in the Shenandoah Valley of Virginia.

AUTHOR COMMENTS: No one is perfect, least of all the main character of this novel. While I wanted to tell his story, I realized that coming from his background he might not be the most enlightened guy around, and therefore frustrating to some readers, so I included the voices of the women in his life to help the reader to a broader of view of what’s happening in this family and community. To the extent that this man is able to evolve, it’s only with the help of these women. The result is a picture that is real, I think, but not one that everyone will be comfortable with. People make mistakes. Can they be redeemed?

LOCAL OUTLETS: Any bookstore should be able to order the book from Small Press Distribution.