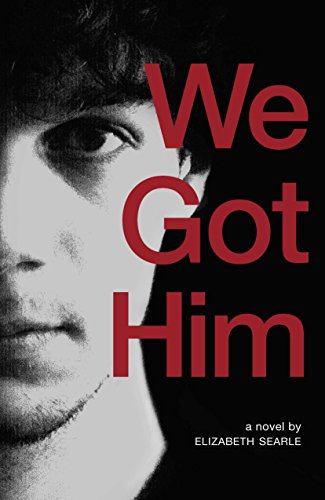 This week’s other featured book, “This. This. This. Is. Love. Love. Love.,” by Jennifer Wortman, can be found by scrolling down below this post, along with the First Tuesday Replay. Or, just click the author’s name on our Authors page.

THE BOOK: We Got Him.

PUBLISHED IN: Nov. 2016. (AudioBook version out in 2018 from Blunderwoman AudioBooks)

SUMMARY: In WE GOT HIM, a longtime married couple face the premature birth of their long-awaited first baby on the night of the 2013 Boston Marathon manhunt, with the Boston area on ‘lock-down’ and a young terrorist on the loose. My title comes from the late Mayor Tom Menino, who posted on Twitter when the bombing suspect was finally captured: “We got him.”

In my novel, ‘Sarah’ and ‘Paul,’ have run their own marathon of years of infertility– before finally ‘getting’ their baby boy amidst the Bomber manhunt madness, when Paul’s 19 year old son from a previous marriage winds up being taken into police custody. Paul’s son has been testing boundaries with Paul and especially with Sarah. While Sarah struggles to give birth, Paul must find his troubled son. And this uneasily ‘blended’ family must– like the fractious city of Boston itself– find a way to come together.

WE GOT HIM blends a public and personal crisis into a tale of (as Tom Perrotta said of my writing) ‘ripped-from-the-headlines realism.’

THE BACK STORY: The face of teenage terrorist Dzhokhar Tsarnaer hovered in my mind for months after the Boston Marathon bombing and the manhunt that placed our own Boston suburb of Arlington on ‘lock-down.’ As the mother of a teenage boy myself, I was haunted by the sullen sad-eyed stare of Tsarnaer and by the fact that so much terror and tragedy were set in motion by two troubled brothers.

I grew up with the News on the TV every night at dinner. My father was a lifelong news hound and political junkie. Many of my writings are indeed “ripped-from-the-headlines.” I wrote an opera and rock opera inspired by the infamous Harding/Kerrigan skating scandal. My most recent novel, GIRL HELD IN HOME, is based on a true crime. In 2013, I found myself obsessing about the larger-scale crime of the Boston bombing– a major act of terrorism, miles from my own home.

For years I had worked, on and off, on a novel about a birth night. I’d gone through a 14 hour labor without drugs when having my own wonderful son. I liked the idea of structuring a novel around ‘stages of labor.’ I added to the mix a loose-cannon step-son, who harbors secret feelings for his stepmother Sarah and who disrupts the already fraught birth night with his bizarre borderline-crazy behavior. Yet I needed a stronger plot engine.

Then the face of the Boston ‘bomber boy’ superimposed itself over the sullen dark-haired stepson in my novel. When the real blurry surveillance camera photos of the bombing suspects first emerged, I’d wondered how many dark-haired young men were hauled in by police in the ‘manhunt’.

The novelist in me further wondered: what if ‘PJ,’ the stepson in my novel, were one of those boys? Suddenly the notion of setting my ‘birth night’ on the Marathon Bombing manhunt night struck me. Then I was off and running on a newly imagined novel, with high tension and high stakes.

WHY THIS TITLE?:  On the night of the Boston Bomber Manhunt, once the suspect had been captured, the late Mayor Tom Menino Tweeted to the Boston area: “We got him.”

The phrase stuck in my mind. I always like titles that have multiple meanings. In this case, ‘We Got Him’ applies not only to the brave police ‘getting’ the (now convicted) bomber but also the couple in my novel, Sarah and Paul, ‘getting’ their long-awaited son.

In a larger sense, I feel we as a society have ‘got’ a lot of troubled young men like the neglected and troubled stepson, PJ, who sets in motion much of the drama in WE GOT HIM.

WHY WOULD SOMEONE WANT TO READ IT? Combining the intimate story of a birth night with the national news story of the Marathon bombing manhunt, I feel my book has a unique blend of personal and public sagas. The story might appeal in particular to those who experienced the manhunt night or a similarly traumatic public event, to anyone who has experienced a birth night, to those in ‘blended families,’ to women struggling to be wives, mothers, step-mothers, daughters- while somehow still being themselves.

“TURNING TRAGEDY INTO GREAT ART… [A] magnificent new noveL… In it, Searle takes a very public tragedy and turns it into personal and profound art. And could it be more timely?” — Caroline Leavitt on carolineleavitt.com

“Elizabeth Searle has long worked the intersection of spectacle and news…For her new novel, “We Got Him,” Searle homes in on the manhunt that followed the 2013 Boston Marathon bombing, around which she weaves the tale of a troubled family. A versatile, darkly comic writer, Searle brings a pulsing, kinetic quality to her work.” — Joan Silverman, The Portland Press Herald.

“Working surmise and revelation with a caffeinated accuracy, Elizabeth Searle replays the drama of the Boston Marathon bombings, exploring how public tragedy invades and unsettles an already unsettled home life. ‘WE GOT HIM’ assesses the nature of  extraordinary circumstance and what it then takes to negotiate happiness.” — Sven Birkerts, critic and editor of AGNI

“I loved Elizabeth Searle’s new novel, WE GOT HIM, which beautifully parallels the marathon bombing and search for the bombers with the story of an Arlington couple undergoing the premature birth of their hard-won baby… I couldn’t put it down and enjoyed the Faulknerian play and ambition, ‘AS I LAY DYING’, here transformed to as I lay birthing.” — DeWitt Henry, founding editor of Ploughshares; Goodreads.

AUTHOR PROFILE: Elizabeth Searle writes fiction and theater. She grew up all around the country, writing scripts as a kid which she acted out with her sister. She is drawn to soap operas and rock operas. She is the author of five books of fiction, most recently her novel WE GOT HIM, and she is the creator and playwright of TONYA & NANCY: THE ROCK OPERA, which has drawn major media coverage and which has been produced around the country, including in Boston, Chicago, LA and in NYC. Her previous books are: her novel GIRL HELD IN HOME, as well as CELEBRITIES IN DISGRACE, a novella that the New York Times Book Review called ‘a miniature masterpiece’; A FOUR-SIDED BED, a novel nominated for an ALA Book Award, and MY BODY TO YOU, which won the Iowa Short Fiction Prize. CELEBRITIES IN DISGRACE and A FOUR-SIDED BED are produced as short films screening at festivals, most recently in Cannes, 2019. A FOUR-SIDED BED is in development as a feature film; Elizabeth’s feature script has won multiple awards. Elizabeth’s theater works have been featured on GOOD MORNING AMERICA, CBS, CNN, NPR, the AP and more. Her TONYA & NANCY: THE ROCK OPERA has a 2020 production starring Broadway’s Andrea McArdle and a CD out from Broadway Records. The show has been reviewed as ‘brilliant and touching’ and has generated worldwide media attention. Elizabeth teaches fiction and scriptwriting at Stonecoast MFA. She lives with her husband and son in Arlington, MA where she often zooms along the Minuteman Bike Trail. She loves music and movies and hanging out with her boys. Visit her at: http://www.elizabethsearle.net

And check out her film and theater projects at: http://www.afoursidedbedfilm.com http://www.tonyaandnancytherockopera.com

AUTHOR COMMENTS: “Enduring a ‘premature’ birth, triggered in part by the stress of the bombing week, my parent characters are obsessed with trying to keep their baby ‘safe.’ As a writer and a Mom, I have always been fascinated by the desire for safety and the ways that lives can shift into danger zones in an instant.

“I hope readers of WE GOT HIM experience the large-scale drama of the Marathon manhunt along with the smaller-scale, deeply personal drama of a marriage and family put to the test– amidst the intense intimate feelings and life-or-death stakes that are part of even the most ‘ordinary’ birth.

As a final note, having been married for many years, I wanted to pour into this fictional story much of what I know about the bracing ‘marathon’ that is a longtime marriage: couples running as a tag team, taking over for each other when one or the other loses strength. ‘Boston Strong’ is the slogan that emerged from the Marathon manhunt. I want to depict both a city and a family facing down dire obstacles and- in the end- pulling together.

WHERE ELSE TO BUY IT: Amazon, Small Press Distribution network and order it at New Rivers Press itself: http://www.newriverspress.com.