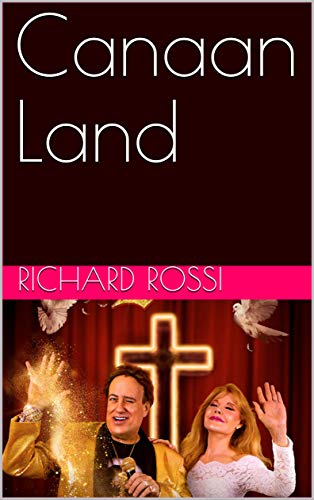 SUMMARY:Canaan Land” is a love story between Brother Billy Gantry, a charismatic con man, phone psychic, and preacher, who falls for Sister Sara Sunday, a sincere Christian and beautiful evangelist. She seeks to redeem “Brother Billy,” who manipulates the flock with fake miracles, including a stunt with gold glitter and feathers he claims are from angels. He turns her small online ministry“ into a growing Tinseltown racket involving celebrity converts and sermons at the Hollywood Bowl. Can Billy quit the religious show to find true faith and redemption? The novel is also a Hollywood motion picture coming out later in 2020.

THE BACK STORY: “Canaan Land” is an unapologetic look at modern religion and televangelism based on the writer’s personal experiences as a former faith healing evangelist.  Both the book and the film are, in part, a reflection on Rossi’s own spiritual journey as a former “faith healer” and the bitter lessons he learned. His new life ministry is geared towards the spiritual renewal and healthy creative expression of others, in part, via witnessing his own experiences.

WHY THIS TITLE: The title comes from the biblical term “Canaan Land,” the land of Promise, of milk and honey.  Canaan Land became a term referred to among black slave songs as a longing to escape oppression and experience liberation and abundance. It has several meanings in the novel. In addition, to this spiritual concept it also describes the characters heading to Hollywood in the story for salvific reinvention.

WHY SOMEONE WOULD WANT TO READ IT: “A lot of ministers today are really scared (during the Corona virus outbreak). Here is why: More people today are looking (for answers) to politicians or science. Church income is down and that is scaring a lot of church leaders. Some of them are saying to those who are working at home: ‘Since you’re saving money by not having to drive to work or buy lunches, we want you to send those savings to us.’

“Then there are those who are more brazen and have no shame. They are saying ‘This is the end. Jesus will be here in a matter of weeks or even less” who know they can say or do anything, and they know their supporters are still going to back them.” So said host Wesley White recently on his live streaming broadcast Start Our Sabbath.

Years before the Corona outbreak, filmmaker Richard Rossi began his Canaan Land project which addressed such issues as ministers “fleecing the flock.” Most recently, his novel Canaan Land tells the story of a con man preacher, abused by another preacher as a boy, who falls for a sincere Christian woman and realizes his con game is not a game anymore.

“The novel CANAAN LAND is a heartfelt, edgy, spiritual romance which, considering my own reading preferences, I will nor nit pick or split hairs about. I am a slow reader who does not ready many novels, but, at almost 400 pages, I was able to finish it in two nights. Part of it is that it is a very easy read, but also that it is very entertaining and engrossing. Although written in a relatively short time, it I clearly a labor of love. The people, places and things are described in loving and rich detail. Rather than being a nihilistic teardown of an opportunistic minister and the faith he represents, each character, whatever their moral leanings, or lack thereof, is shown to be laboring under his or her own burden for which he needs deliverance. And the ending, although tending towards a favorable resolution, is in itself bittersweet, demonstrating that we are all a work in progress and that our own personal futures are the fruit of our own choices which at the end of the day, inevitably incline either to life or to death. And I am looking forward to the completed movie version!” (Alan Doshna, alandoshna.com)

“Canaan Land, tops a list of most-anticipated independent novels and films. Rossi’s a former evangelist exorcising his own demons as he shares his journey from fundamentalism to freedom. Everything about Canaan Land is unique. It’s faith-based, yet edgy.” (Charisma Magazine)

“Canaan Land is not an attack on religion. It exposes the counterfeit to show the search for that which is pure, lovely, true.” (Christian Today)

AUTHOR PROFILE: Multi-medium artist Richard Rossi was born in Pittsburgh, Pennsylvania. After working in his hometown as a guitar-playing minister, he journeyed from scripture to script, migrating west on a three-thousand mile cross-country journey to Hollywood to pursue his interest in acting and filmmaking.

FILM: Richard is an Academy Award-considered filmmaker. His feature dramatic film “Sister Aimee: The Aimee Semple McPherson Story” was voted one of the greatest guerrilla films of all-time and was nominated for best film in Milan. He released his dramatic feature film “Baseball’s Last Hero: 21 Clemente Stories,” on Amazon and his “Richard Rossi 10th Anniversary of Sister Aimee” also contains his Oscar-considered documentary “Saving Sister Aimee” and other bonus extras. His newest film “Canaan Land” will be released in 2020 and is based on his novel of the same title.

BOOKS: Rossi recently gave a radio interview about his popular books. “I wrote my novel ‘Stick Man’ for my own catharsis and healing after my Dad died,” Rossi said. “I hope it brings some healing for others who have experienced loss or pain in life and love. My second book, ‘Create Your Life,’ came about organically without any intention of writing it. Creative people have contacted me over the years asking for advice and encouragement. I answered their questions in emails and blogs. I had an “Aha!” moment recently when I realized I had a couple hundred pages of material answering these questions artists asked me. I wrote a little more on the subject and organized it into the book ‘Create Your Life.’ “Sister Aimee: The Aimee Semple McPherson Story'” is my third book, and contains my thoughts on the famous female faith-healing evangelist who was the subject of two of my movies I made. The book contains my screenplay from my feature dramatic film on her life. “Canaan Land” is my second novel and the film based on it is my third feature dramatic film I wrote and directed.”

MUSIC: Amazon also is the exclusive venue for Richard’s popular music CDs “Without Her Love,” “Seasons of My Heart,” and “The Kingdom Is Near.”

FAMILY AND FAN CLUB: Richard lives with his wife of thirty-six years, and their two children, Karis and Joshua, in Hollywood, California. For more information, visit the International Richard Rossi Fan Club athttp://www.richardrossistore.com

AUTHOR COMMENTS: “Canaan Land” is a work of fiction. It shows dramatically the difference between a sincere Christian minister, Sister Sara Sunday, portrayed by Rebecca Holden in the movie, and a fake one, Brother Billy Gantry, played by me in the film version. The names are fictitious. In the interest of full disclosure, I have on occasion, critiqued certain toxic teachings and religious teachers on my social media, but the film itself is a work of fiction based on my experience in the religious world.  Religious critics of my novel help me because they compliment Canaan Land as something worthy of being talked about. They’re worried my novel will shake things up. I would rather be criticized by the modern day Pharisees than ignored.  Artists may be attacked, criticized, misunderstood, but because they challenge things, their work is unignored. And this is the opposite of the insipid tripe that is often put out as a faith-based story.  “Canaan Land” is my coming out as a former fundamentalist who can no longer subscribe to their beliefs in a hateful angry monster god and their self-righteous practices. My story is my repentance and the main character of my novel is confronted with the need to repents.  I’m going to publicly challenge the biggest names in religion to repent and give back the money they’ve ripped off from the poor.”
SAMPLE CHAPTER: https://www.amazon.com/Canaan-Land-Richard-Rossi-ebook/dp/B087BMC4LL/ref=tmm_kin_swatch_0?_encoding=UTF8&qid=1588007197&sr=1-1
WHERE TO BUY IT: Amazon, Barnes and Noble.