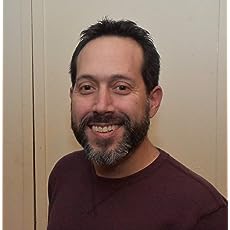 This week’s other featured books, “Finding Lillie,” by Kate Ferris, and “Keeping time,” by Thomas Legendre, can be found by scrolling down below this post, along with the First Tuesday Replay. Or just click the author’s name on our Authors page.

THE BOOK: The Great American Deception.

SUMMARY: Private Investigator Frank Harken’s worldwide fame has only made him more cynical. And living in a giant mall that spans the USA only serves to drive him nuts on a daily basis. So when a femme fatale barges in asking Harken to track down her sister, he knows when a case sounds too good to be true.

Puzzled by the sudden arrival of Arjay, a sentient coffee-making robot he never ordered, Harken shrugs and rolls with the caffeinated punches. But as the intrepid duo dig deeper into the missing dame’s disappearance, they uncover a deadly plot that could take down the best part of a society gone bananas…

Can the world-weary PI and his barista-bot foil the dastardly scheme to take down the Great American?

THE BACK STORY: As a satirist, I’ve always included comedic scenes in my novels. With this book, I wanted to see just how far I could push comedy while telling an engaging story and making fun of pretty much everything. I had come up with the idea of the setting of the Great American and knew I wanted to try writing a detective novel for the first time. When I decided to have the story narrated by a robot coffee machine, the comedy became central and the book took on a life of its own. I spent about two years writing The Great American Deception and a long time looking for the right publisher. Now I’m working on the sequel.

WHY THIS TITLE?: The setting of the novel is the Great American, an amusement mall society that stretches from coast to coast. The word “Deception” has to do with the missing person case Detective Frank Harken is trying to solve, but also with the unexpected arrival of the novel’s narrator, Arjay, who might be more than he seems. On a meta level, “Deception” also refers to the genre and purpose of this novel. The book is a science fiction detective story, but it’s also a parody of one as well as a satire of writing and language itself. In many ways, things are not what they seem.

WHY WOULD SOMEONE WANT TO READ IT? Laughing is good for your health.

“Get ready for some super great fun! The Great American Deception is a hilarious (and deeply disturbing) voyage through a futuristic netherworld of caffeinated robots and diet pizza. Somewhere—possibly nowhere—Douglas Adams is sighing pleasurably with a combination of approval and afterlife indigestion.” —Gary Shteyngart, author of Super Sad True Love Story and Lake Success

“A laugh-out-loud detective noir that reads like Twin Peaks meets Futurama. Even the footnotes are hilarious!” —Jacopo della Quercia, author of The Great Abraham Lincoln Pocket Watch Conspiracy and co-author of MacTrump

“I love noir fiction and this novel is an ongoing tribute to the genre. It can be read as a well-plotted detective novel or as a collection of endlessly placed wacky comments. Every page has multiple smart-aleck comments. My favorite part though is the world building. Stein imagines a future world in which nearly the whole country is a gigantic mall that contains all the environments a person would need for a full life. One of my favorites is Win-Fall, where patrons can drink and bet at the same time. One of the games is an outsized roulette wheel: “Spectators bought drinks from the roving vendors with cylindrical tanks strapped to their backs, who wielded trigger pumps and shouted, “Get your drink on!” They shot mixed drinks straight into customers’ mouths while people cheered for the roulette ball to land on red or black or even or odd or the number eight or twenty-seven, or other things. The game had standard roulette rules and a giant, see-through ball, ten feet in diameter, so you could see the person scrambling inside it like a hamster late for an important meeting.“ With the great detective Frank Harken and his doughty assistant Arjay, who is a coffee maker, the reader wanders through the Great American, trying to save a client’s sister. The crime turns out to be an even greater crisis, an assault on the whole system of Great American’s values. And Arjay proves to be much more than a coffee maker. This book is hilarious.” —Verified Amazon review

AUTHOR PROFILE: Scott Stein’s novels are The Great American Deception, Mean Martin Manning, and Lost. He has published short satire and fiction in The Oxford University Press Humor Reader, McSweeney’s, National Review, Art Times, Liberty, The G.W. Review, and Shale. His MFA and BA are from the University of Miami and his MA is from New York University. Scott grew up in Bayside, Queens and now lives outside Philadelphia. He is a professor of English at Drexel University, where he teaches Writing Humor and Comedy and Fiction Writing. He is probably drinking a cup of coffee and writing something ridiculous at this very moment.

SAMPLE CHAPTER: Sample chapters can be read on Amazon.

LOCAL OUTLETS: The book can be ordered by any local store.

WHERE ELSE TO BUY IT: Amazon https://www.amazon.com/Great-American-Deception-Scott-Stein/dp/1946501212/