THE BOOK: One Life 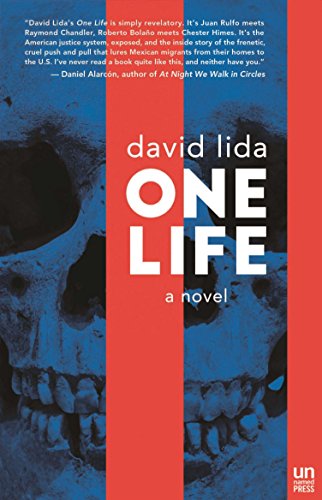 SUMMARY: Richard helps save the lives of the guilty. An American living in Mexico City, he’s hired by defense teams on capital cases, and investigates the tragic and traumatic personal histories of clients potentially facing the death penalty. His speciality: undocumented Mexican defendants standing trial in the United States. It’s a good fit for an ex-novelist, with no family and a failed marriage behind him, not too keen on attachments. In Richard’s business, success isn’t exoneration or proof of innocence, but life in prison.

Esperanza Morales is a young woman from the destitute village of Puroaire. Leaving a life of poverty and abuse, she finds work as a maid in the home of an upper-crust Mexican family. She works hard and builds a life for herself. But the stability won’t last long, after she loses her job and she’s convinced by a boyfriend to try their luck on the other side of the border. Her harrowing adventure and life as an undocumented worker in the U.S. could be the story of millions of migrants in America. Except that Esperanza’s ultimate fate is to find herself in a Louisiana jail cell, facing trial for the murder of her eleven-month-old baby.

When Richard takes on Esperanza’s case, the boundaries of his closely circumscribed life explode. The young woman’s story resurrects his novelistic instincts, and undermines his stoic approach to his job as he pursues clear answers in a case that offers anything but. Suddenly, Richard is aspiring for more, far more, than he ever believed he would. Set in the American South and in rural Mexico, One Life is an unflinching, page-turning novel that examines the difference between pragmatism and cynicism, the indelible links between sex, death and love, and the meaning of justice.

THE BACK STORY: I’ve been a writer since childhood. But since 2007, I’ve made my living as a mitigation investigator, researching the lives of undocumented Mexicans facing the death penalty in the U.S. This involves traveling through the back roads of some of the most impoverished communities in Mexico and the U.S., listening to the stories of the accused, as well as their families, friends, classmates, colleagues, teachers and doctors.

From the very first day on the job, I knew that I was going to places, and being told incredible material, about people whose lives my friends in the U.S. — and even in Mexico City, my home since 1990 — knew nothing about. I was amazed and inspired by the struggles of the undocumented, and how little even the Americans in the communities in which they live know about them. I knew I had to put something down on paper.

For about two years I took notes, trying to figure out what the story was and how to tell it. After I had an outline, it took me the better part of five years to finish. That’s the longest it’s ever taken me to complete a book.

WHY THIS TITLE?: One of my favorite movies is The Third Man. What I like about the title is that you’re never sure who the third man is — at certain moments “the third man” seems to refer to one character, later another. A reader might ask herself at different points in One Life, to whose one life are we referring? Esperanza’s? Richard’s? The baby’s?

WHY WOULD SOMEONE WANT TO READ IT? The relationship between Mexico and the U.S. has never been more troubled than it is today. Indeed, the president was elected on a platform that largely consisted of demonizing Mexico and the Mexicans. Yet at the same time there are about 12 million Mexicans in the U.S., and for decades, Americans have consumed more salsa than ketchup. I have been to communities in the U.S. where, if the undocumented were to disappear from one day to the next, there’d be no one left to make a bed in a hotel, cook a meal in a restaurant, do maintenance work in an office building, prune a tree, kill a pig in a slaughterhouse or do any kind of construction work.

It’s also a reflection about the death penalty, about life and death, sex and love, and what they mean to different people. I guess that covers a lot of potential readers.

I was very flattered when Ploughshares called One Life “exactly the dark-humored piece of literature everyone should be indulging in right now.” The Los Angeles Review of Books called it “relevant” and Lit Hub said it “adds vital narratives to debates on immigration and the criminal justice system.” But I was most flattered after an event for the book in Zacatecas, Mexico, when an older man came up to me and said, “You understand us.”

AUTHOR PROFILE: I was born and raised in Greenwich Village in New York City, but was never convinced that my home town was the center of the earth. After high school, I took a year off before going to college — and I’m still on it. Luckily, at different junctures in my life, people offered me work, and were more interested in whether or not I could do the job than in my educational credentials.

Ever since adolescence I dreamed about what life was like in other places. I first visited Mexico when I was 23 years old, and moved there in 1990. I figured that if it didn’t work out, I would go back home in six months. I’m still here.

I’m the author of hundreds of magazine and newspaper articles. I’ve also written four books, each of which has something to do with Mexico. My first, the short story collection Travel Advisory, was selected for Barnes and Noble’s Discover Great New Writers Program. My second, a street-level panorama of contemporary Mexico City called First Stop in the New World, received rave reviews from the New York Times, the Los Angeles Times and the Chicago Tribune, and was chosen one of the best books of the year by the San Francisco Chronicle. Las llaves de la ciudad was written in Spanish, my second language, which I learned as an adult, and chosen by Críticas magazine as one of the best books of the year.

These days, I’m finally back in school, studying psychoanalysis, and giving guided tours of Mexico City. If anyone would like to know a little more, I’d encourage them to visit my website, http://www.davidlida.com.

WHERE ELSE TO BUY IT: Amazon, Barnes & Noble, Indie Bound. It’s also available as an ebook.