THE BOOK: The Hero

THE AUTHOR: Hélène Sanguinetti (at right)

THE TRANSLATOR: Ann Cefola. (Photo below)

THE PUBLISHER: CHAX Press, whose mission is to increase the impact of new writing in our culture, has published close to 200 books by innovative poets for more than 30 years. Located in Tucson, CHAX takes pride in producing letterpress books that emerge from intense collaboration between poet and book artist.

SUMMARY: The Hero, a book-length experimental poem, combines multiple genres and typographical elements to explore the fallacies of war. In this her fourth book, Hélène Sanguinetti leverages poetry, prose, dramatic dialogue and visual wordplay to create a literature that is intriguing and disturbing at once. As in earlier work, she examines questions of national identity and effects of common disaster. The challenge, for Ann as translator, was to convey the jarring, cubist quality of the work, rather than make it more linear and rational—therefore, easier—for the reader. See “Review Comments” below for more on the text.

THE BACK STORY: Published by Flammarion in France more than a decade ago. 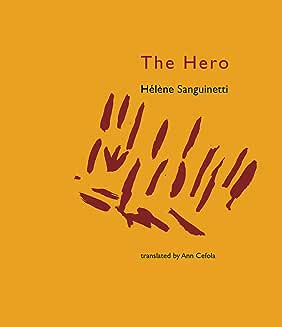 WHY THIS TITLE?: The Hero is not only a character but serves as an archetype, a container to hold the best of human impulse, and in wartime, often the worst.

WHY WOULD SOMEONE WANT TO READ IT? If you are interested in the best of contemporary French poetry, or want to be challenged by someone doing something inventive with language, then The Hero is a must-read.

“The text of The Hero coaxes the reader on at the same time that it resists him. One searches for something to ground it, but it keeps us on the border between narrative and free association. The reference points that emerged for me brought up a vague idea of a story about a day after I finished it, kind of a ghost story. Sort of a combination of Finnegans Wake and the poetry of Artaud. The hero is the reader.” — Eric Greinke on Amazon

“Hélène Sanguinetti’s The Hero is not a book of poetry for the faint of heart. It challenges readers, fracturing the story of the hero to analyze it from every angle. It is up to the reader to search for answers, and expert puzzle master Ann Cefola, who has translated this book from the French, is to thank for bringing this literary kaleidoscope to the English language. The Hero will leave you worn down and breathless. More importantly, it will leave you wanting more.” — James Lord Parker in Lines+Stars

“After spending time with Hélène Sanguinetti’s poetry collection The Hero, any attempt to classify, label, or contain the work feels counter-intuitive. Translated from the French by Ann Cefola, this collection vibrates, slithers, and undulates—the language itself echoing various natural elements with which it is so obsessed. By way of loose guidance, Sanguinetti divides the collection into eleven sections or poems, consisting of locations (The Expanse, The Town, The Canal, The Ditch), characters (The Son, The Women, A Poor Man), and experiences (The Battle, The Meal, Victory). This is where the guidance stops, and our task as readers is to observe and form connections, however tenuous, among the parts we are given.” — Alice Maglio in The Collagist.

“Sanguinetti takes on the archetype of the hero from every angle—at times many simultaneously—and in a language itself heroic in its leaps and shifts and its inventive riffs that tap into ambient legend, with its steaming horses, epic journeys, and, of course, battle. Volatile style, startling content, super-charged tone—Cefola captures them all in her splendidly nuanced translation, a rare case in which nothing at all is lost, and the English language gains a powerful and beautiful book.” — Cole Swensen from back cover of The Hero

AUTHOR PROFILE: Ann Cefola, a poet (Free Ferry, Face Painting in the Dark), has been translating the works (The Hero, Hence this cradle) of contemporary French poet Hélène Sanguinetti for 20 years. Translating has opened unexpected opportunities for Ann, who often speaks to writers on this topic. To find out more, subscribe to Ann’s popular annogram poetry and arts newsletter/blog.

TRANSLATOR COMMENTS: Sanguinetti is catching fire in the United States—journals snap up her work and publishers have heightened interest. The reason may be that our cultural environment seems as chaotic today as the subjects in Sanguinetti’s nonlinear poetry. On some level, the not-knowing, serendipity, and complexity make sense.

Chapter 4 The Battle from The Hero.docx

WHERE TO BUY IT: CHAX Press, Amazon.