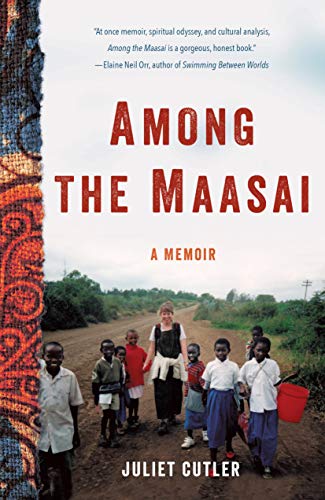 THE BOOK: Among the Maasai

THE PUBLISHER: She Writes Press

SUMMARY: In 1999, Juliet Cutler leaves the United States to teach at the first school for Maasai girls in East Africa. Captivated by the stories of young Maasai women determined to get an education in the midst of a culture caught between the past and the future, she seeks to empower and support her students as they struggle to define their own fates.

Cutler soon learns that behind their shy smiles and timid facades, her Maasai students are much stronger than they appear. For them, adolescence requires navigating a risky world of forced marriages, rape, and genital cutting, all in the midst of a culture grappling with globalization. In the face of these challenges, these young women believe education offers hope, and so, against all odds, they set off alone—traveling hundreds of miles and even forsaking their families—simply to go to school.

Twenty years of involvement with this school and its students reveal to Cutler the important impacts of education across time, as well as the challenges inherent in tackling issues of human rights and extreme poverty across vastly different cultures. Working alongside local educators, Cutler emerges transformed by the community she finds in Tanzania and by witnessing the life-changing impact of education on her students.

Proceeds from the sale of this book support education and safety for at-risk Maasai girls.

THE BACK STORY: In 1996, I heard about the Maasai Secondary School for Girls from a client while I was working as a summer camp counselor and backpack guide in Montana. I was intrigued and moved by the stories of girls who so desperately wanted to go to school that they would run away from home, walk vast distance, and beg for one of only a few places at a school they knew could transform their lives. At the time, I had to finish my student teaching, and then I’d be a certified teacher. I inquired about a volunteer teaching position at the school and was invited to take a two-year post after I finished my degree. I’d always wanted to study abroad in college but had never done it. This seemed like an amazing opportunity to experience the world and also to help girls in need. Little did I know this would begin a life-long commitment to empowering girls through education.

WHY THIS TITLE: The book had two other titles before Among the Maasai. Its first title was Sacred Tears and the second was Moving Mountains, but ultimately those titles didn’t give the reader enough of a clue about what the book is about. Among the Maasai seemed like the perfect fit—short, to the point, and clearly representing the story.

WHY READ IT: I hope that readers will be inspired by the true stories of Maasai girls who struggle to balance their love of culture and family with their desire to become educated young women making a difference in the world.For the last 20 years, I’ve witnessed the ways education has improved not just the lives of students, but also the lives of entire families and communities. As important, I hope readers will be inspired by the ways that engaging in cross-cultural community and working to help others transformed me. Lifelong friendships in Tanzania have had a profound impact on my life.

“At once memoir, spiritual odyssey, and cultural analysis, Among the Maasai is a gorgeous, honest book.” —Elaine Neil Orr, author of Swimming Between Worlds

“A thoroughly engaging and meaningful look into the struggles confronted by many indigenous societies today and the challenges faced by the educators who are at the forefront during these rapidly changing times.” —Kenneth Cushner, EdD, author of Teacher as Traveler and Beyond Tourism

“Cutler deftly conveys how her work with the Maasai people transformed her life in deep and significant ways with empathy, grace, honesty, respect, and sensitivity to the Maasai people and their culture. This book is a must read for anyone in development practice, girls’ education, women and gender empowerment, and cultural studies.” ―Damaris Parsitau, PhD, Echidna Global Scholar 2017, Brookings Institution

“In a world where white saviors in Africa tend to reign supreme, Among the Maasai is a breath of fresh air. . . . this exceptional narrative cuts through preconceived notions of what it means to cross borders and build relationships.” —Daniel Ruth, executive director of Lutheran Partners in Global Ministry

“Juliet Cutler observes complex juxtapositions―intersections of wealth and poverty, modern and traditional, insider and outsider. She asks herself difficult questions―about her place in the business of helping, her motives, and the limits of her role as a teacher from a different culture. But there is powerful sophistication in her questions and in this beautiful account of transformation.” ―Daudi Msseemmaa, Senior Adviser, Mwangaza Education for Partnership

“This brave and heartfelt account of Juliet Cutler’s journey in Tanzania is an inspiring and important work. Through the intersection of her story with the extraordinary experiences of her young Maasai students, Juliet reveals the transformative power of education.” —Herta Feely, author of Saving Phoebe Murrow

Juliet Cutler is a writer, an educator, and a designer of award-winning exhibits for museums, parks, and cultural centers throughout the world. Her teaching career began in Tanzania in 1999, and since that time she has been an activist for girls’ education worldwide.

Cutler’s literary and professional publications now number more than two dozen, and she has taught writing in many settings including as adjunct faculty for the College of St. Scholastica in Minnesota. Her first book, Among the Maasai, has received critical acclaim through several national and international awards including the Independent Publisher Book Award, Living Now Book Award, Sarton Women’s Book Award, Foreword INDIES Book of the Year, and the IBPA Benjamin Franklin Award.

In 2009, she was selected by Orion Magazine to participate in their annual writing workshop, and in 2013, she participated in a writer’s residency at La Muse in Labastide-Esparbairenque, France. In 2019, The Serenbe Institute for Art, Culture, and the Environment honored Cutler as a Serenbe Fellow—a distinction given to nationally recognized thought leaders, scholars, and artists.

Cutler holds an MA in English from Colorado State University and a BS in education from the University of North Dakota. She currently lives near Atlanta.

AUTHOR COMMENTS: I’ve witnessed firsthand the ways violence can cut short a young woman’s education. Safety remains a huge issue for Maasai girls, who are frequently married at that age of 12-14 to men significantly older than them. Estimates for the rate of female genital cutting among the Maasai remain high at between 60 to nearly 100 percent. The number is difficult to capture as Maasai women rarely report what has happened to them. On top of this, rape is not uncommon, and domestic violence remains a problem. To address issues of safety, I’ve partnered with local Tanzanian leaders on The Safe Initiative, which aims to address the root causes of disempowerment for Maasai girls, while also providing much needed immediate support to at-risk girls. The initiative provides:

Girls who don’t feel safe are less like to go to school and even less likely to succeed there. The Safe Initiative is working to create safe spaces for girls at schools across Tanzania. All proceeds from the sale of Among the Maasaiare supporting this initiative, as well as scholarships for Maasai girls.

LOCAL OUTLETS: My favorite indie bookstore is Hills & Hamlets Bookshop, located only a short walk from where I live. They have signed copies of Among the Maasai available for purchase on their website:https://www.hillsandhamletsbookshop.com/shop/among-the-maasai-by-juliet-cutler-pre-order

WHERE ELSE TO BUY IT: Among the Maasai is available from all major book retailers, indie bookstores, and Amazon.