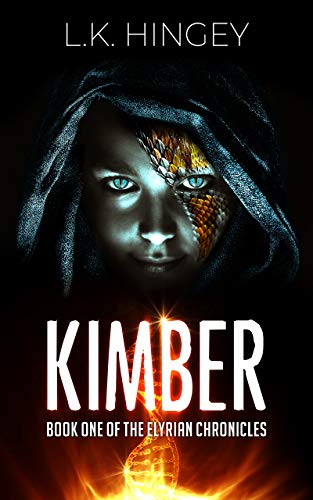 THE BOOK: KIMBER: Book One of the Elyrian Chronicles.

ONE-SENTENCE LOGLINE: Join fierce new heroine, Kimber, on a dangerous journey against corruption as she flees her underground refugee city, traveling through a surface world ravaged by solar winds and scarred by war in search for the evidence of inhumane genetic testing that may be all the can free her people from a life of oppression and segregation.

SUMMARY: KIMBER is a suspenseful, dark, and visually stunning dystopian tale of the fight against corruption and oppression. A cataclysmic solar event drives the remnants of humanity into a subterranean refugee city and it is here, in the shadows of the underground, that an experimental subspecies of Man is being raised. The 23 Auroreans, human embryos with the fused DNA of Earth’s two most radiation-resistant animal genomes, grow and come of age in a city where they are forced to answer a life-changing question. Are they citizens or are they slaves, created to serve as the city’s critical link to the poisoned surface world? Join Kimber, her brothers, and her sisters on a daring journey where self-reliance, discovery, and love come to life.

THE BACK STORY: “Inspiration for KIMBER: Book One of The Elyrian Chronicles: I was a helicopter pilot in the U.S. Army, until I fractured my spine while flying, and was forced to medically retire. I was obviously quite torn up, as I had plans to stay in the military until retirement. I had loved it, lived it, and breathed it. So, I took a five-month trip backpacking the Appalachian Trail, alone. Along the 1800+ miles of the trail, I had the freedom to sort out my thoughts and perceptions of the world around me. I have always been intrigued by social movements, governance issues, injustice, and humanity’s constant fight against oppression.

“I also had a very complex childhood, which plays into my many interpretations about who we are and our place in this great big, beautiful world. The storyline for KIMBER was born in the mountains, and in January of 2020, I began writing it down. It spilled out within three months and it quickly moved into editing and publishing. Works in progress are Books Two and Three of The Elyrian Chronicles, and two Elyrian prequels.”

WHY THIS TITLE?: Kimber is the protagonist. She is one of the first of 23 grafted humans (embryos modified and spliced with radiation-resistant DNA) Kimber is a visually stunning character and is covered in thousands of red and orange scales, and becomes the hero that she did not plan to be, but her people needed her to be. She is complex and battles demons within herself; demons that were born of highly controversial decisions. Many names were brainstormed for Book One of The Elyrian Chronicles, but KIMBER, in its simplicity and intrigue, was the clear choice!

WHY WOULD SOMEONE WANT TO READ IT? KIMBER’s world is a futuristic dystopia. The premise is quite unique and has a highly scientific base/ built history to play off of. A rogue planet, Elyria, was pulled into our Sun in the year 2109. Due to the newly introduced elements in the Sun’s core, solar activity becomes increasingly volatile. 20 years after impact, a solar flare of unprecedented intensity lashes out. The resultant CME, a dangerous and all too real charged cloud of particles, slams into the Earth’s magnetosphere, wreaking havoc on the ozone layer. With no ozone, and a world riddled by radiation poisoning, the biosphere crumbles and the only survivors are a group of humans who have sought refuge in an underground city.

Fans of books like The Martian, The Hunger Games, Divergent, The Maze Runner, Mortal Engines, and fans of movies like The Matrix and Avatar, will find KIMBER’s chilling dystopian tale fresh and invigorating.

5-STARS: This is quite a good read! The nuances of KIMBER leaves you asking for more. Seeing that this is a series, it leaves ample opportunity for developing characters. Some interesting moments are when Kimber loses hope for her people but finds it anew through compassion, a level head, and sheer determination. The mix between science and the start of the human condition leaves a feeling of apprehension and joy. I highly recommend this book. (verified Amazon purchase)

5-STARS: I could NOT put this book down! Great read! I can’t wait for the next book in the series to come out. (verified Amazon purchase)

5-STARS: Kimber does a great job of drawing on scientific concepts to create an immersive story. I grew attached to the characters and was shocked by the end of it! I’m already looking forward to the sequel! (verified Amazon purchase)

5-STARS: I had the pleasure of reading Kimber: Book One of The Elyrian Chronicles and thoroughly enjoyed it from beginning to end. It was more thought provoking than I had imagined it would be, but I truly appreciated the science and imagery the author brought to the forefront of my mind. The beginning of the book was filled with so much information and descriptive wording that I could not help but feel like I was inside the story all along! The second part of the book brought more action into the mix, none of which would have been understandable had part 1 not been filled with the history of the world and the science behind it. My favorite part of Kimber was the colorful scenery that was mixed into the new, colorless world the citizens of Inanna had to live in. The Aurorean’s colors were magnificent and their personalities were lovable and fun! It felt like they could have been my friends in reality! There were all sorts of other beautiful colors swirled into the journey the main character, Kimber, embarked on.

AUTHOR PROFILE: L.K. Hingey was born, raised, and enlisted into the U.S. Army out of Detroit Michigan. She graduated from the University of North Dakota in 2012 as a private and commercial helicopter pilot with a Bachelor of Science in Aeronautics, before commissioning as a U.S. Army officer. She has since medically retired from the military and continues the Army lifestyle as an Active Duty spouse. She resides with her husband, Jonathon, who is U.S. Army Blackhawk pilot. L.K.’s many interests include her dogs, fitness, backpacking, traveling, and writing. Upcoming works include Books Two and Three of The Chronicles of Elyria, and Books One and Two of The Elyrian Prequels!

AUTHOR COMMENTS: The central theme is the fight against oppression and injustice. It is communicated by the dangerous journey that Kimber embarks upon to discover the deep roots of corruption of the governing entity, and resultantly becomes the savior of her people. As she journeys, she discovers some truths are darker than others, and fights to confront demons regarding her own past. I believe that KIMBER’s story is incredibly relevant to everything that is happening in the world right now and that readers may find a deep connection to the struggle again segregation.

SAMPLE EXCERPT: Attached at the end of questionnaire!

WHERE TO BUY IT: Amazon https://www.amazon.com/gp/product/B089CXDQSL/ref=ox_sc_saved_title_1?smid=ATVPDKIKX0DER&psc=1

(Newly revised PROLOGUE that will be debuting in edition two of KIMBER!)

Kimberly’s eyes fluttered shut. She could feel the pressure behind her brow bones, constant and unrelenting. The sensation swelled and throbbed, threatening to take over her sight completely. Kimberly inhaled sharply and felt a solitary tear drop off her lashes. The sickness was consuming her. She steadied her breathing, trying to find refuge beyond the shapeless grey haze that her world was turning into. But it was here in Kimberly’s own mind that the demons raged the fiercest.

Kimberly had no doubt that the council was to blame for the cancer that was devouring her frontal lobe. The illness was too swift, too unnatural to be organic. It did not matter anyways. In some twisted way, Kimberly felt she deserved this. She deserved to have her sight stolen from her and her body consumed from within. She had stolen more than that, from individuals much more innocent than she, in the time of the great panic over 20 years ago.

Shadows impregnated Kimberly’s sinister thoughts, and she was taken back in time to the underground laboratories. She was placing something in a hazy jar filled with a strange yellow fluid. What she was holding was too obscure to make out. Kimberly’s memory splintered, and she shook her head in discomfort. The pressure pulsed between her temples. Kimberly felt unhinged. Disconnected. No matter how hard she tried to anchor herself on the pain of the present, her memories kept dragging her back into the darkness.

She was on a cold metal table. Or was that someone else? Kimberly’s thoughts drifted up to the surface world. Panic. Such unprecedented panic. A solar explosion had just been detected and astronomers forecasted the subsequent cloud of radiation to impact the Earth’s atmosphere in a matter of days. She recalled the footage of the hell-bent flare, lashing out from the Sun’s engorged surface, looping nonstop on every media outlet. Kimberly’s consciousness

drifted back down the four subterranean levels of the laboratory. She looked around in her mind’s eye, committing each atrocity of the Bureau of Race Preservation to memory.

Images that she would normally only revisit in her nightmares flooded Kimberly’s mind. She forced her eyelids to remain shut, compelling herself to stay locked in memory. She knew she had to face her past in order to brace herself for the dark days to come. It did not matter anymore if her actions had been right or wrong. All that mattered now was the safety of her daughter. Kimberly’s hands found their way onto her stomach and her eyelid’s fluttered again. She could feel the phantom kicking of a baby’s feet. Kimberly flushed with warmth, the tender memory igniting her courage more than any amount of anger towards the corrupt council ever could.

The freedom of her daughter, whom Kimberly had lovingly named Kimber, was at stake and though Kimber was no longer a child, Kimberly knew she would do anything to protect her. Even if it meant sacrificing everything. Kimberly knew things that no one else in the underground refugee city knew. She knew of secrets, dark truths of illegal genetic manipulation, and crimes committed by not only by the council, but by her own two hands. Kimberly had sworn to keep her knowledge silent in exchange for her daughter’s safety and had prayed every night since to never have to breech her vow.

In light of the tyranny behind the recent ordinances and the impending governmental decrees though, Kimberly knew the time had come. The council, charged with the care of humanities last surviving city, had grown bold in the segregation of the humans and the grafted. They used fear to control and manipulate their citizens, quietly forcing Kimber and the twenty-two other Auroreans into a life of subservience. Kimberly knew she did not have much time left in this world, but before she would draw her last breath, she would see to it that the truth was exposed.

A water droplet fell from a nearby stalactite, the sound echoing off into distance. Everything was so still that it seemed time itself had frozen. Kimberly exhaled slowly. This was the calm before the storm. Her daughter would soon inherit the torch of freedom and be asked to weather a tempest so terrible, that the thought alone drew another tear down Kimberly’s cheek. Kimber was Inanna’s only hope. Kimberly prayed for her daughter’s safety. She prayed for her daughter’s swiftness. Above all, Kimberly prayed for her